Home IN THIS ISSUE A True Champion Arrives
IN THIS ISSUE
SPORTS
July 1, 2014 Paul Wegmann 0

Champ Bailey is the latest premium defensive back to bolster the Saints’ back line. 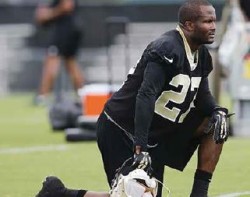 The Saints are emerging as a top-five defense, and in the 2014 off-season, they have continued to add talent via the draft and free agency. A good deal of focus has recently been placed on the defensive backfield, with notable newcomers and returnees over the last two years — including Kenny Vaccaro, Jairus Byrd, Marcus Ball, Rafael Bush, Keenan Lewis and Stanley Jean-Baptiste. But perhaps the one man who could best be called a final piece of the championship puzzle is Champ Bailey, who arrives as a potential future Hall of Famer.

Joining the Saints, Bailey brings his stellar resume, which includes 12 Pro Bowl selections in 15 seasons (the most ever by a cornerback), six All-Pro selections (three First Team), 212 games started and 11 career playoff games. Arguably the best cover cornerback in the game year-in and year-out during much of his career, Bailey has displayed almost no weakness. His cover skills have been among the best of all time (he is notably ranked alongside Deion Sanders, Darren Woodson and Aeneas Williams in that regard), but his game has always been well-rounded in terms of abilities.

While Sanders was known for shutting down wide receivers, Bailey has been known to do that while proving himself a superior tackler, capable of taking down at the line even those running backs much bigger than him. In the open field, he rarely misses a tackle. His 2005 and 2006 seasons might be the most impressive two-year stretch of any defensive back in modern NFL history: He brought in 18 interceptions, 295 return yards, three touchdowns and 132 tackles.

Perhaps Bailey’s most important credentials are intangible ones. It can be difficult for a defensive back to enter the realm of making pivotal, amazing, game-changing or even season-changing plays of the kind that are so often seen by offensive players. But if there was one play in his career so far that shows Bailey’s capabilities, it happened during the 2005 season divisional playoff between the Denver Broncos and the New England Patriots. In the second half of a one-score game, facing Tom Brady (who was already a two-time NFL champion sporting a 10-0 playoff record, with only three career playoff interceptions), Bailey snagged a well-thrown third-and-goal pass from high in the air, and then proceeded to race down the sideline to the edge of the opposing goal line, in a play that would eventually hand Brady his first playoff loss ever. It was a momentum-shaping play, based on rare instinct and perfectly honed skill, in which Bailey put his teammates on his back and brought them to a win.

Bailey accomplished these feats even though he was the least-targeted defensive back in the league (an accomplishment in itself, as this meant he was the defender that most opposing quarterbacks tended to avoid), but it is difficult to say if he will still alter game plans the way he once did. It is possible that he can, considering that he continues to do his duty at corner while most cornerbacks — at least, the few greats still playing at this stage of their career — would have made the switch to safety by this point.

A notoriously tough and well-conditioned player, Bailey routinely missed three or fewer games per season before last year. But 2013 was a true exception, as Bailey missed time with a preseason injury and then, after his return with yet another injury, missed 11 games altogether. Nonetheless, Bailey still started in the AFC Championship game; Tom Brady, hardly forgetting their past encounters, only targeted him once in the whole game. At 36 years old, Bailey is the oldest player on the Saints’ roster. But, as with all the greats, he sees his conditioning at this stage of his career as a challenge rather than as an obstacle.

“It’s just something I’ve got to get used to,” Bailey says. “My first thing is to lead by example, show how hard I can work and try to lead that way. And all these guys … I know I have a lot of experience, and I’m not going to shy away from telling them things I think they need to hear and making sure I’m there for them when they have questions.” In early practices, defensive coordinator Rob Ryan has been extremely impressed. “He looks fantastic,” Ryan says. “You look out there, and you think he’s one of those young guys running around. But he’s bringing excitement to our defense, and knowledge, and it’s awesome to add a great player like him.”

It is through his drive, passion and knowledge that Bailey brings extra value to the Saints. In addition, he is seeking his first NFL championship — and the Saints are seeking to win the Lombardi Trophy again after frustrated attempts since 2009. While Bailey joins one of the most complete defenses of his career, he will not have the pressure of carrying more than his share. At the same time, he will bring ball-hawking ability, playmaking skills and leadership, providing the Saints with a deadly combination for which opposing teams will have to show respect. This may be a special opportunity that allows this Champ to finally win a championship.