The cheerful and conscientious actress dishes on starring in the final season of HBO’s vampire hit True Blood as a series regular, and — equally impressive — she champions animal welfare as an honorary co-chair of the Louisiana SPCA’s Howling Success. 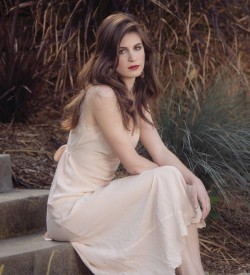 Amelia Rose Blaire is so pleasant and polite in real-life during conversation that it’s somewhat hard to imagine her behaving as a blood-lusting vampire. But watching her onscreen as Willa Burrell in the iconic HBO vampire hit series True Blood gives plenty of insight into Blaire’s quite convincing ability to blood-lust, and do all of the other dark and brooding stuff that vampires do. Her ability to transform is a true testament to her amazing acting chops that helped propel her into the iconic series in the first place. Now, True Blood is on its seventh and final season, which began June 22.

Blaire was already a big fan of True Blood when she scored a guest role in the sixth season. Set in the fictional Louisiana small town of Bon Temps, the show has mostly been filmed in Los Angeles — and even around parts of Louisiana in past seasons. “I remember watching the pilot for the show and being completely enthralled with it, so to get to become a part of it has been truly a spectacular experience,” Blaire says. She wound up earning a regular role for this season as Willa, a character that vampire sheriff Eric Northman (played by Alexander Skarsgård) turned into a vampire progeny — all in order to spite her father (the Governor of Louisiana, Truman Burrell, played by Arliss Howard), who waged an all-out war on vampires.

“I had never gotten to play a character for so long, and, since coming onto True Blood, I have been faced with situation after situation where, as an actor, I am very scared, and I have to push myself past the fear to embrace the scene,” Blaire says. “It’s rare to find material that’s really challenging, especially for women, so I feel fortunate to be able to do this for two seasons.”

Working on True Blood has made Blaire realize that the actors she’d idolized for so long, including Skarsgård, Anna Paquin and Stephen Moyer, were so refreshingly normal. “This is such an incredible group of people, whom I’ve admired for years, that I’ve gotten to work with; all the actors are so talented and grounded,” she says. “It’s a true group effort. I’ve learned so much from them. And there are no divas on the show!” The effervescent actress promises that anything can and will happen in the 10 episodes that comprise this last season. “Everyone is going to be pushed to their limits, and Willa is no exception to that” Blaire explains.

“There are so many things happening this season that will have people’s jaws dropping! It’s going to go out with a bang.”
Blaire has relished doing the things that actors starring in a popular series on a high-profile network get invited to do. “Ringing the NASDAQ Bell was one of the most surreal things ever, and seeing my face up in Times Square was unbelievable,” she says. “It’s been an entirely new experience to be interviewed and to talk about a project I am passionate about. I had never been on a red carpet until the premiere of season six. It is a crazy experience, and the energy is so high, and it’s just overwhelmingly awesome — it’s a whole new world.”

When Blaire isn’t working, she can be found indulging in hobbies that keep her grounded, including cooking, sewing and yoga, and she is always acting as a champion for animals. “I grew up in a household that was very animal-friendly, and we were always volunteering at different shelters — that’s something that’s been ingrained in me since I’ve been a little girl,” she says. Blaire is extremely passionate about issues that affect the wellbeing of creatures great and small. “Bees are connected with everything — all that grows is pollinated by bees, so it’s important to learn what they mean to our world and to spread the word about the troubles they face.” Blaire also spends time at home hanging out with her two cats, which she describes as “needy” compared to her rescued pet rabbit. “The cats are always on someone’s lap waiting to be cuddled, but Jazz, my rabbit, will come from underneath the bench when he wants to; he calls the shots!”

Because of her unbridled passion for the plight of animals, Blaire has been named an honorary co-chair for the Louisiana SPCA’s Howling Success event — taking place Nov. 15 at the Hyatt Regency New Orleans. “This is such a wonderful cause,” Blaire says. “I feel like we are all connected — every living creature on this earth — so we all have to support and help each other, whether it’s a human, a dog, a cat, a rabbit, a chicken or bees. It’s essential for us to keep helping all of the living creatures of this world. My mom, my sister and I have rescued countless animals. It’s really horrific how animals are disregarded and tossed aside. So I think it is really important to bring awareness to the wonderful pets we can find in the shelters, and to stop puppy mills, and adopt the animals out there who really need homes instead of paying thousands upon thousands of dollars for a dog that’s inbred. Every time I come across anyone who has paid for a puppy my heart breaks a little bit, because I think of all the dogs and cats terrified sitting in the shelters that will be put to death if they aren’t adopted.”

Although she hasn’t filmed anything yet in New Orleans, Blaire visited the city during her eighth-grade class trip. “I remember being so enthralled with it, and I have wanted to go back ever since — I have such vivid memories of visiting New Orleans,” she says. “We explored so many places; we went to a Cajun family house and they cooked a big dinner for us; we took a steamboat ride. The food was so special and unique to the area. It was an incredible experience! And I remember that I love beignets! I’m reading Interview with the Vampire right now, so I’m reading about New Orleans from a vampire’s point of view, which is really cool. I would love to go back and experience New Orleans as an adult.”

And although the era of True Blood is coming to an end, Blaire’s foray into a superlative acting career has only just begun. Her first film, Commencement, has been making the rounds in the film festival circuit. “It was a labor of love,” Blaire says. “There was hardly any budget, and everybody involved in that film put so much of themselves into it. It’s a really special film that means a lot to me about a girl, Krista, who has everything that she thought made her who she was pulled out from underneath her, and it’s also about her parents and grandparents. Hopefully it will get distribution soon so it can be seen by everyone.”

Another film called Only Kids is in pre-production now, and Blaire hopes filming on it begins either later this year or early next year. Blaire has had guest roles on television series such as Drop Dead Diva, Grimm, and Law and Order: Special Victims Unit, and she will certainly continue to earn plenty of future work due to her ability to play a multitude of varied characters. “All of the roles that I’ve played have been so different,” she says. “I would not want to play the same character with a different name over and over again. I feel truly blessed for the opportunities that have come my way.”

837
previous Thomas Morstead: A Remarkable Saint
next Ready for a Close-Up