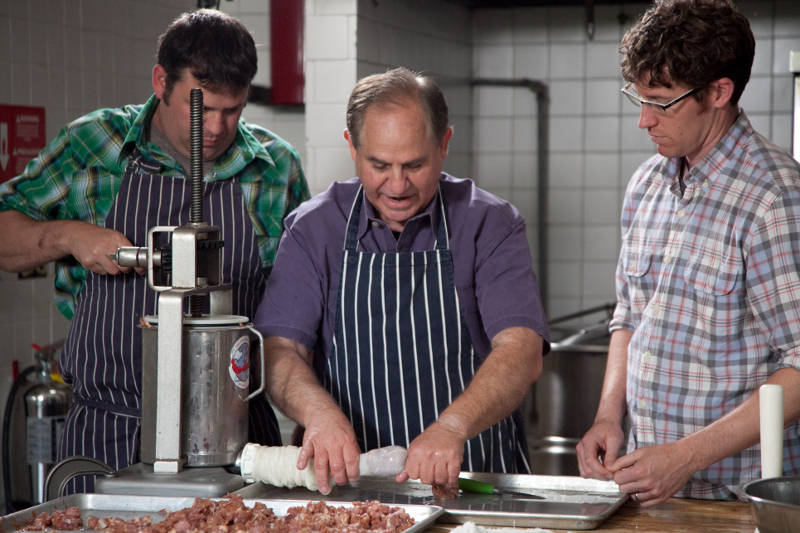 Pop-up dining is all the rage these days and, now, home cooks can catch the spirit of this trend with the national public television series, Moveable Feast with Fine Cooking. Produced by WGBH and Fine Cooking magazine, this Emmy-nominated food and travel show — now in its second season — pairs host Pete Evans (an award-winning Australian chef, restaurateur and cookbook author) with some of the country’s best chefs. Together, they whip up fast-paced feasts in beautiful and unexpected settings. The season premiere, airing Sept. 6 on public TV and PBS affiliates around the country, takes place here in the Crescent City at a Garden District mansion that inspired playwright Tennessee Williams to pen Suddenly, Last Summer.

This season of Moveable Feast with Fine Cooking focuses on harvesting local and seasonal ingredients. According to Evans, this focus is in line with a growing movement of working toward holistic farming practices. “My favorite part of hosting [the show] would have to be meeting the dedicated farmers, fishermen/women and producers of the food we get to play with,” he says. “These people are the real heroes of the food world, and the chefs just put the finishing touches on their amazing life’s passion.”

In each episode, Evans and his guest chefs begin by collaborating on a multicourse menu. Then, they embark on field trips (to vineyards, farms, orchards, fish markets, etc.) to source the best local ingredients for the dishes. Finally, they team up to prepare a delectable and spontaneous menu for an eclectic group of foodies. Throughout the process, the chefs share techniques and tips so viewers can re-create the dishes at home.

The season premiere features two of New Orleans’ top chefs: Brian Landry, executive chef at Borgne, and John Folse, a world-famous chef known for his specialty in Cajun cooking. For this episode, the chefs spent the morning at Covey Rise Farms (near Husser, La.) — sourcing the produce for the menu (including fresh okra, tomatoes and spinach). The group also smoked their own andouille sausage, and got their hands on some speckled trout from Venice, La., and blue crab from Lake Pontchartrain. “The best part of the day is the time spent with the other chefs,” Landry says. “The entire day is spent sharing techniques, stories and, of course, the kitchen. There was a great sense of camaraderie that defined the day.”

The feast continued with Chef Landry’s trout en papillote (a stunning dish with blue crab, brown butter sauce, spinach, fennel, caramelized onions and cherry tomatoes). “I chose this dish because it is all about the ingredients,” Landry says. “The success of the dish completely depends on the freshness of the seafood and the vegetables. The natural flavors are truly highlighted.”

Next up was Chef Folse’s Death by Gumbo (an aptly named dish with andouille, and rice- and poached oyster-stuffed quail in a rich roux). Come to find out, this dish has an interesting history. “Back in the ’80s, I was asked by Craig Claiborne, the food editor of The New York Times at the time, to cook him a dish at his home in the Hamptons that illustrated the evolution of Louisiana’s signature dish,” Folse explains. “I decided to prepare a quail gumbo, rather than the traditional chicken and sausage gumbo or shrimp and okra gumbo. Instead of placing the sausage, oysters, rice and seasoning ingredients in the gumbo broth, I stuffed them into the cavity of the boned quail. Death by Gumbo illustrates the evolution of Louisiana’s signature dish. While Louisiana has seven founding culinary nations, our food is ever-evolving. New flavors continue to find their way into our gumbo pots, jambalayas and étouffées as Hispanic, Latino and Asian cultures make Louisiana their home.”

Moveable Feast with Fine Cooking, which was recently nominated for a Daytime Emmy (in the Outstanding Culinary Program category), features 13 episodes this season. In addition to the Garden District season premiere, two other episodes take place in Louisiana (at Woodland Plantation in West Pointe à la Hache with plantation owner Foster Creppel, and chefs Donald Link and Stephen Stryjewski; and at Bartlett Farm in Folsom with the NPR host of Louisiana Eats, Poppy Tooker, and chef Susan Spicer). The show also travels to other food meccas, including Los Angeles, Portland, Chicago and New York City.

According to Folse, the season premiere will have home viewers salivating and longing for the foods of Louisiana. “I also think they will be intrigued to try some of these dishes on their own, particularly making andouille,” he says. “Many home cooks can become intimidated by making their own wine, cheese, butter or sausage. Hopefully, we dispelled some of the mystery.” Be sure to check livingneworleans.com for updates on the local airing of the season premiere this fall.