Clover Boutique combats the heat of summer with cool style. 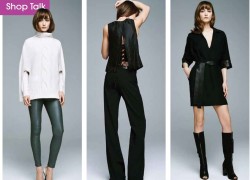 The first day of August hits, and it seems like the days begin moving in slow motion. This sluggish month has me yearning for any slight drop in humidity, longing for September fashion glossies and painstakingly waiting for football season to begin. This is a reoccurring theme. After years of living in this urban tropical rainforest, I cannot get used to the ominous daily thunderstorms, drastic mugginess and aggressive insects. August in New Orleans is not kind if you’re attempting to keep cool and look likewise.

It could be because clothing sticks to you like a Spring Break wet t-shirt contest; make-up melts upon outdoor exposure; and your hair (after spending a considerable amount of time trying to fix it) can accurately be described as “a big hot mess.” Dressing for this extreme climate presents quite the challenge — and sometimes causes me to lose my sense of style and my composure; in August I have a fashion meltdown.

Despite the oppressive dampness and stifling temperatures, a new chic boutique has arrived on the retail scene — and it exudes coolness. The brainchild of the equally cool Melissa Green Coleman, Clover is a refreshing addition to Magazine Street’s boutique row. Coleman is a seasoned veteran when it pertains to retail management, merchandising and the contemporary market. With more than a decade worth of experience in the fashion business, Coleman not only has the resume to succeed as a boutique owner, but she also has incredible style and a fashion editor’s eye.

Her decision to open Clover came about in January after her battle with trying to find streamlined classic pieces to complement her wardrobe. “I was struggling to find the ideal pair of skinny black pants — not denim — for day-to-day wear,” Coleman explains. “I am always able to find tailored staple pieces at online retail boutiques, like Intermix or Shopbop, yet I prefer to shop local.”

Coleman has many friends in the local boutique market, as well as in Los Angeles and in the Southern Gulf states. Although she appreciates the items they carry and enjoys being a patron, she believed she could offer shoppers another option. As such, a few of Clover’s lines are new to the New Orleans area and exclusive to the boutique. Brands such as Calvin Rucker, IRO and Skin by Susan Beischel can only be found locally at Clover.

Not only can you find items to dress beautifully, but the store itself is also outfitted exquisitely. “There was much thought put into the materials for Clover,” Coleman says. “I wanted the space to feel modern, yet at the same time portray the sense as if it has been there forever.” Much like the inventory, Clover’s architectural details were thoughtfully curated. All of the finishes in the boutique are historical salvage: The molding was repurposed from the William French School in the 9th Ward, and the floors (repurposed from an Alabama Plantation) are over 100 years old. Mobile, Ala.-based The Lathan Company — the same company that renovated the Pontalba Apartments, The Presbytere and The Cabildo — completed the build-out of Clover.

New Orleans shopping is on the radar across the country and the globe. We are constantly plugged in high-profile publications, such as Vogue, Garden & Gun and The New York Times. Locals and visitors alike are lucky to have such a plethora of stores to suit even the savviest of shoppers. And Clover will certainly be a posh spot alongside our other sophisticated boutique hot spots.

Clover Boutique
2240 Magazine St.
(504) 272-0792
facebook.com/Clover.NewOrleans
I urge you all to push through August with me, and surrender to the sultry environment in which we choose to live, love and shop. It’s hot — I think you are too. Happy Shopping!