Rose McGowan: The Dawning of Hollywood’s Next Great Director

The accomplished actor channels her creative fire into Dawn, her bold and impressive directorial debut; gushes about her treasured memories of New Orleans; and uses her powerful voice to crusade for the voiceless animals of the Louisiana SPCA. 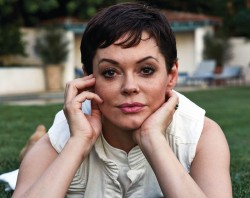 Rose McGowan has undoubtedly solidified her chops as an amazing, in-demand actor in Hollywood. She has taken the screen by a mighty storm in films such as Scream, Grindhouse and Conan the Barbarian, and in popular television shows and movies like Charmed, Nip/Tuck and Elvis. But after some reflection, McGowan decided to follow her heart by taking the leap into directing. With Dawn, a substantial and engrossing short dramatic thriller set in 1961 that explores young women in their formative years, McGowan satisfied her creative soul and truly unearthed her artistic passion. The accolades have been forthcoming since the film’s premiere at the 2014 Sundance Film Festival, and McGowan is proving herself to be a force to be reckoned with early in her new career as a director.

“For me it’s all about disrupting the mind,” McGowan says. “In Dawn, there’s actually very little violence on screen; what you are imagining you’re seeing is more horrifying than what you actually see on screen. It is very tense after the initial soft sweetness gets through to the core of possibly something rotten. And this was such an interesting era for women, especially because we still see it now. Women were groomed to grow up and behave a certain way in society; then, later in the 60s, everything turned, and all of a sudden you’re supposed to be all free love, which benefits the man.

And meanwhile, you’ve been programmed to please a man, so it’s fascinating how women in their early years were formed that way. This is kind of a study of that, when someone is bred to be a lamb and they possibly meet a wolf.”

The New York Times recently gave Dawn a glowing review, describing the film as “creepy” and “unsettling,” and noting McGowan’s burgeoning talent as a director. “It does feel good,” says McGowan, who plans to continue acting in addition to directing. “I still like acting, but it’s not my greatest love. I was in things, I think, because I was kind of uncomfortable as an actress — not on screen; I disappear into the role, but I didn’t realize I was kind of in the wrong job. I have three movies lined up to act in and that’s cool. They’ll be really fun, but where I feel like I really shine as an artist is when I’m allowed to be an artist. My husband (Davey Detail) is an artist, and my father was an artist, and being around an arts community again has really just reminded me that when you’re an actor you get very lost in the whole agent/manager/lawyer thing and you’re not actually around creative people much. I think there needs to be a balance in life, and, if you’re an artist on any level, it’s really important to have that community around you. It reminds you of what you’re suffering through all the b.s. for.”

McGowan’s foray into directing has altered the dynamics of the type of roles she’s now being offered. “It’s almost like when you find the truth of a person as an artist; the rose kind of rises up to meet you,” she says. “The irony is that fantasy is not one of my favorite genres, and that’s what I’ve done most of! But as an audience member, that’s not what interests me. For me, Dawn has really changed the game in terms of the directors I want to work with and directors considering me for certain roles, because it says, ‘Here, this is my voice; this is what kind of person I am; this is what kind of mind I have; this is my taste level, which is quite different from a lot of the stuff I’ve played.’”

The lack of female directors in Hollywood bothers the refreshingly outspoken McGowan, and it’s a statistic she aims to change. “The fact that Congress and the Senate are far more advanced and more integrated than Hollywood, well, that goes to show there is something really, really wrong,” she says. “It’s inappropriate and it’s unacceptable. And it’s also boring; I feel like we’re getting the same movie over and over again. There was a whole hullabaloo of why the summer movies didn’t do well. Well, you make bad films — let’s start there! There is an assumption in Hollywood that if you throw something up on the screen, people go see it, no matter what. You know what? You owe it to paying audience members to make a good film, even if it’s a popcorn movie — which I’ve been in a lot of those — or a TV show.

Sometimes people do things to make money, but they must remember that they are artists first. It’s time for some integration, some new blood, some new thoughts. There’s lots of room for all the stories that we can tell as humans, whether you’re a woman or a man.”

McGowan feels an innate connection with New Orleans and dreams of one day owning a home here. “After I did my first movie, I had just enough money to get an apartment and then take myself to Paris and then to New Orleans,” she says.

“I knew nobody there; I just floated all around the city by myself and haunted the graveyards. I always had this great affinity for the South ,and one of my favorite writers is the great Southern writer Flannery O’Connor. There is something about Southern gothic beauty, and the history and the stories, the eccentricity — I just love everything about New Orleans. I’ve been back numerous times, and I’ve filmed a lot there — like Elvis right before Katrina. I’ve considered buying a place down there, but it just might become another thing that makes me feel guilty, I think, [laughs] because I wouldn’t be there enough. I dream of having a house in the Garden District with a screened-in wrap-around porch and lacquered, painted wood floors and a nice rocking chair. I see it. It’ll happen someday.”

Indeed, New Orleans has made a deep impression on McGowan; she even hired a band right off of a French Quarter street for her wedding to Detail in October 2013 at the Paramour Mansion in Los Angeles. “I went to New Orleans for my bachelorette weekend, and saw a lot of great music and found this fantastic New Orleans brass band composed of 19 really young amazing musicians,” she says. “They were a highlight of the wedding!” And McGowan — the stylish, ethereal beauty that she is — is a huge fan of local designer Reagan Charleston’s unique, intriguing jewelry. “I’ve worn some of Reagan’s pieces,” McGowan says. “Her jewelry is amazing. There’s an intensity found in her designs that I really respect.”

McGowan also is unwavering in her support of animal causes, and the animals of Greater New Orleans are the latest recipients of her generosity — thanks to her selfless act of signing on as a Celebrity Chair for the Louisiana SPCA’s Howling Success Patron Party and Gala on November 15 at the Hyatt Regency New Orleans. “Lots of people in Hollywood do this,” she says. “But that’s good, because we have a voice and we have a responsibility to help the things that are hurt and damaged by us. And we continue to do damage. And if I can be out there mitigating that damage and trying to show animals there is kindness and there is love, then I want to be a part of it.”

McGowan currently has a rescued Pomeranian named Sasquatch, and she just recently rescued a Pit Bull/German Shepard mix, Ms. Noodle, who was several minutes away from being euthanized. “It’s been a real lesson, because she wasn’t the style of dog I was looking for,” McGowan says. “I love Boston Terriers — they’re so cartoony, and I’ve had Happy, Bug and Fester, who were all Bostons. I would have overlooked Ms. Noodle, but she is amazing and has brought a great joy to my life. It’s humbling.”

With four features as a director in the works and many other pistons firing in her creative sphere — the multi-faceted entertainer is even recording music again under her own name for the first time in 10 years, after using different monikers for soundtracks, because the time wasn’t right, according to McGowan, for an actor to be singing — the world will be experiencing plenty more of the brilliant renaissance woman’s creations in the not-too-distant future.

“In all facets of my life right now, guns are blazing — not in an aggressive way but in a fun way,” she says. “It’s inspiring. For a long time in my career, I thought, ‘I wonder when people are going to recognize my worth as an actor?’, and I was like, ‘You know what? I actually don’t really care if anybody does or doesn’t!’ That was the biggest lesson for me. For a while, I just took off and traveled because I had to get away from the Hollywood machine and I came back. Again, it’s about being an artist; you can curate your own life. You can work in an office and be an artist in your own life. You just have to see the beauty in places, and see art, and let things make you feel and you’re an artist. Everybody can be one and that’s what’s so great. I hope that by me just getting out there and starting to do it, I can inspire other people as well.” @rosemcgowan, reagancharlston.com, la-spca.org