This NOLA transplant shows kids that hoop dreams aren’t the only dreams. 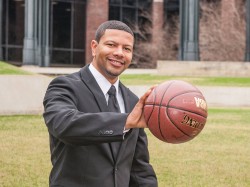 Sky Hyacinthe loves basketball — but even in the early 2000s, as a point guard on the Division I University of Connecticut team, he knew that the sport shouldn’t be his only focus. “I’m a six-foot guard,” he says. “There’s about a billion of us walking this earth. So the NBA wasn’t truly a destination for me, but basketball was an opportunity to get a scholarship and go to college.”

Hyacinthe graduated from UConn with a bachelor’s degree in communications, and he went to work for New York-based Icon International. “I was in Manhattan at a marketing firm, and a college teammate of mine got traded to the New Orleans Hornets,” he says. Hyacinthe was planning to relocate to Atlanta; first, though, he accepted the invitation of his friend, former Hornets center Emeka Okafor, to visit New Orleans.

“When I did that, I actually went to the Ninth Ward to see some of the devastation from Katrina,” he says. “I met these kids who were playing basketball and started working with them on a day-to-day basis. When it was time for me to leave, I just thought: ‘There’s so much more to do.’”

Hyacinthe stayed in the city to found Elevate New Orleans, an after-school enrichment program aimed at student athletes. “Basically, it starts in seventh grade,” he explains. “We work with kids from seventh to twelfth grade, but we also have a college program.” Elevate’s support continues for two years past students’ college graduation.

“It’s really ages 12 to 24,” he says. “We try to play a major role in their lives, assisting in their ups and downs.”
The program is centered on academics and social development, helping kids learn study skills, complete homework, prepare for tests and raise their grade-point averages with the help of tutors from Loyola and Tulane universities. “We have kids who come in with a 1.9 GPA, and, throughout the program, they will leave with a 3.5,” Hyacinthe says. “If they’re maintaining a 3.0 average, they get to go to basketball training.” Training is the “carrot,” as Hyacinthe calls it, and the program targets kids who are truly enthusiastic about basketball — who really, really want that carrot.

Elevate is rigorous on all fronts, but kids enjoy close relationships, friendly competition and a familial atmosphere. “You can see their bond in action,” Hyacinthe says. “They’re different, but they’re all alike. They come from Thibodaux, LaPlace, Houma — from very far away to be part of this program. Once they get here, it’s nothing but appreciation and admiration for each other.”

Right now, Elevate New Orleans has 45 kids enrolled — and all 14 of the program’s high school seniors will be heading to college soon. Hyacinthe hopes to see those numbers grow. “I would love to be able to house 100 students at once,” he says. He foresees Elevate alumni returning to New Orleans to give back what they learned from the program. “At some point, they are not going to be kids anymore — they’re going to be working adults and give back to their city,” he says. “The plan is starting with a very small seed.”

As Elevate’s executive director, Hyacinthe is always on the lookout for sponsors and partners who want to help develop the program’s reach. He cites Chevron, Winn-Dixie and the Laureus Foundation as key sponsors. And of course, he remains grateful to his close friend Okafor. “He’s our leading funder — and he’s the reason I came to New Orleans in the first place,” Hyacinthe says. elevateusa.org