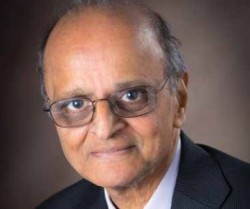 Neurologist Dr. Jay Rao has practiced medicine for more than four decades, spending much of that time studying and treating Parkinson’s disease and other movement disorders. Medical understanding of degenerative nervous-system disorders — and treatments — have both come a long way since Dr. Rao entered the field.

“In Parkinson’s, the main problem is that a group of brain cells dies aggressively,” he explains. “These cells make a neurotransmitter called dopamine, which reinforces programs for survival and replication. When you lose those neurons, you don’t want to do anything. You can’t move quickly, think quickly or think clearly.”
As LSU’s Endowed Chair for Parkinson’s Disease Research and Director of the Parkinson’s Disease and Movement Disorders Center, Dr. Rao and his team “took care of patients, did clinical research and had a basic science lab,” he says.

Dr. Rao also established the Gulf South’s first deep brain surgery program for Parkinson’s. Prior to the advent of deep brain stimulation, Parkinson’s was treated by creating lesions in the brain. “We started doing brain surgery for Parkinson’s in 1999,” Dr. Rao says. “At that time, we didn’t have the deep brain stimulation. What we did was burn a small hole in the brain areas involved in the disease.” This lesion could improve the tremors by which Parkinson’s is often characterized; however, if lesions were applied to both sides of the brain, they could cause damage to a patient’s speech and cognitive abilities.

“Then, in 2003, we started doing deep brain stimulation therapy,” Dr. Rao says. “We implant an electrode in the patient’s brain, and hook it up to a pacemaker that is implanted in the chest, just like the heart pacemaker. The pacemaker is then programmed to delivered a measured amount of electricity to special areas of the brain, and this reverses many of the problems of Parkinson’s disease patients. It’s now standard practice.” The electrode helps regulate nerve impulses within the brain, controlling tremors; its battery can last anywhere from three to five years, depending on usage. Patients also take “precursor” medications that help the brain produce more dopamine.

Because Parkinson’s disease is complex, and patients may respond differently to treatment combinations, it’s important for patients to begin working with a specialist immediately upon diagnosis. “This is a very complicated process and treatment,” Dr. Rao says. “And it’s available only from some people who specialize. What’s critical is how those patients are treated for the first two to three years.” He works with Dr. Brian Copeland, another LSU neurologist who specializes in movement disorders, to treat Parkinson’s patients. “We have specialists here in New Orleans,” Dr. Rao says. “Patients don’t have to go to the Mayo Clinic, Cleveland or the NIH.”

Quality of life after Parkinson’s diagnosis has hugely improved, due to more effective treatments and disease management — and Dr. Rao is optimistic about his field’s progress. “In the ‘60s, from the time of diagnosis to death was 10 to 12 years,” he says. “Now, I have patients who live with the disease for 30 to 35 years. The first thing you need to know is: You’re not going to die of this. Parkinson’s disease is treatable.”

Dr. Rao and his team have been very active in raising public awareness of Parkinson’s disease by starting or helping to start nearly 30 Parkinson’s support groups in the states of Louisiana and Mississippi. “One of the most important things, which I’m so happy about, is that in the last 25 years, we have really prevented patients from dying from this disease,” he says. “The second important thing is that, in most patients, we’re able to give good quality of life for more than 15 years.”