Revel in the holiday season, and paint the town red (and green!), during a festive weekend in the Crescent City! 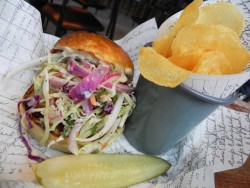 Lunch At: Besh Restaurant Group’s Executive Pastry Chef Kelly Fields and Pastry Chef Lisa White are killing it at one of the Paramount Building’s latest additions, Willa Jean. Located downtown on the corner of O’Keefe Avenue and Girod Street, this bakery/cafe offers goodies all day long, from breakfast to dinner, every day of the week. Dive into the irresistible lunch menu, featuring dishes like croissant-wrapped Pigs in a Blanket; a grilled fish sandwich, topped with tartar sauce and served on a sweet Hawaiian roll; or corn and crab fritters with crab boil aioli. 611 O’Keefe Ave., (504) 509-7334, willajean.com

Step Into the Past At : You can’t travel back in time, but it sure feels like it when you see the historic Beauregard-Keyes House and Garden Museum decked out for Christmas. Built almost two centuries ago, the home was originally designed by architect Francois Correjolles who combined elements of the Greek Revival style with those of a Creole cottage. Although the spectacular home is open for tours all year long, throughout the month of December, the Beauregard-Keyes House and Garden Museum is fully decorated for the holiday season in classic, Victorian-style ornamentation. 1113 Chartres St., (504) 523-7257, bkhouse.org

Sip At: Get cozy and comfortable in the lap of luxury at the elegant Polo Club Lounge at the Windsor Court Hotel. Reminiscent of the private clubs in England, the Polo Club Lounge offers a stately atmosphere with overstuffed wingback chairs, a long wooden bar and a courteous, skilled mixologist behind the stick. Enjoy well-crafted cocktails like The Foiled Scotsman, made with Glenmorangie Original and dark crème de cacao, and munch on stellar bar snacks, like ginger beer-braised short ribs or blue crab gratin. 300 Gravier St., (504) 523-6000, windsorcourthotel.com/polo-club-lounge

Revive At: Start your Saturday morning with a cuppa joe and a toothsome treat at Bittersweet Confections, owned and operated by Louisiana native Cheryl Scripter. Situated in the Central Business District on Magazine Street, this sinfully sweet cafe offers handcrafted, hot or iced espresso drinks — from cappuccinos to Americanos — and drip coffee from Orleans Coffee Exchange. Opt for a frothy, rich cappuccino, or one of many loose-leaf teas, to sip between nibbles of an intoxicating confection, whether it be a decadent chocolate truffle or a strawberry shortcake cupcake filled with vanilla pastry cream and fresh strawberries. 725 Magazine St., (504) 523-2626, bittersweetconfections.com

Frolic At: Ring in the holiday at the 3rd annual NOLA ChristmasFest located inside the Ernest N. Morial Convention Center. From Dec. 18 to 27, the convention center will play host to an array of Christmas festivities, including an indoor ice-skating rink, carnival rides, a display of over 70 Christmas trees decorated by local organizations and much more. NOLA ChristmasFest kicks off with a Children’s Lantern Parade down Fulton Street, complete with a local brass band and Santa himself. Bring the whole family, and join in on the fun! 900 Convention Center Blvd., nolachristmasfest.com

Dine At: Opened recently inside the Old No. 77 Hotel & Chandlery on Tchoupitoulas Street, Compère Lapin offers an eclectic combination of French, Caribbean, Creole and Cuban-influenced cuisine in a swanky, yet comfortable atmosphere. Top Chef’s Nina Compton has created a menu that reflects the diversity that has always been present in New Orleans’ cuisine — with dishes like spicy tomato gazpacho with fresh lobster, a jerk shrimp roll with pineapple tartar and coconut tres leches. Don’t forget to get into the spirit with craft cocktails created by stellar bar team Ricky Gomez (previously of Cure), Zac Augustin (previously of Kingfish) and Abigail Gullo (previously of SoBou). 535 Tchoupitoulas St., (504) 599-2119, comperelapin.com

Brunch At: One of the shining stars of the Commander’s Family of Restaurants, Café Adelaide is a supreme spot for brunch in the Crescent City. Named after a true, New Orleans personality Adelaide Brennan, who was known for a theatrical personality and Auntie Mame-like antics, Café Adelaide & the Swizzle Stick Bar is a tribute to her glamorous lifestyle. Talented local chef Carl Schaubhut offers a tantalizing menu with dishes like Shrimp Remoulade Panzanella with crab-boiled corn coulis; a Boucherie Biscuit topped with braised pork shoulder; and a blueberry-citrus Belgian waffle with white chocolate and citrus cream cheese mousse. 300 Poydras St., (504) 595-3305, cafeadelaide.com

Rejoice At: Originally built in 1727, the St. Louis Cathedral fronts Jackson Square in the French Quarter and is easily one of the most recognized landmarks of the city. Every year, both locals and tourists alike attend the St. Louis Cathedral annual Christmas concert, featuring the cathedral’s own concert choir and orchestra performing classic holiday pieces, like Bach’s Cantata, BWV 147 and Herz und Mund und Tat und Leben, and other seasonal selections. Regardless of your religious affiliation, this memorable musical celebration at one of the country’s oldest cathedrals shouldn’t be missed. 615 Pere Antoine Alley, (504) 525-9585, stlouiscathedral.org

Dine At: One of celebrity chef Emeril Lagasse’s most popular eateries, NOLA Restaurant is located in the heart of the French Quarter only a hop and a skip from Jackson Square. Open for almost 25 years, NOLA features a wood-fired brick oven and an open kitchen where you can watch the chefs work their culinary magic. Lagasse works closely with his chef de cuisine Brian Mottola to design a creative menu, offering Southern Louisiana-inspired cuisine like wood oven-roasted oysters with house-cured bacon; shrimp and grits with crimini mushrooms; buttermilk fried chicken with rosemary gravy; and almond bread pudding with chai ice cream. 534 St. Louis St., (504) 522-6652, emerilsrestaurants.com/nola-restaurant