Al Petrie, president of the Lakeview Civic Improvement Association, fights for his neighborhood 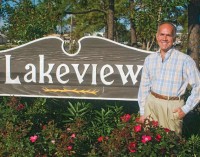 Al Petrie, an oil and gas consultant, has lived in Lakeview for 43 of his 54 years. In 2004 he joined the board of the Lakeview Civic Improvement Association (LCIA) and is currently its president. His first assignment four years ago was overseeing the “green spaces” committee. At the time, that involved nothing more than calling the city about cutting the grass. After the levees failed, however, Petrie’s committee took on a larger role: clearing and replanting seven miles of neutral grounds. Since Katrina, the LCIA has played a major role in Lakeview’s dramatic recovery and become one of New Orleans’ most active neighborhood associations.

How did the LCIA react to Katrina?

The storm changed everything. Within a week, 10 of us board members had our first conference call. We still had water in our homes. That began the transformation of the neighborhood association into a more proactive group.

Has the rebuilding process changed the character of Lakeview?

Anyone who moves in now is here because they want to be. We’re turning into a much younger neighborhood than we were before. The average age of Lakeview before the storm was probably 55 years old. Today it’s probably 35. And I think the civic engagement has drawn people to Lakeview.

What do you see as the long-term role of neighborhood associations in New Orleans?

The next mayor has to acknowledge that neighborhood associations must have greater involvement in the city’s future. The city does not have the financial resources or the people to get everything done that we need to make a full recovery. The next mayor needs to tap into that resource, because we’ve seen what it can do in Lakeview.

What’s the next step for the LCIA?

When the Iowa floods occurred back in June, a group of us went there to show them our model. What happened in Iowa was the closest thing to what happened in New Orleans. They had huge devastation of neighborhoods and they were fighting the same issues. Our long-term idea is to take this model that we’ve created to other communities that are at risk, whether from earthquakes or floods, and show them how to prepare before the disaster. Think how much better we would have been if more of this had been in place.

What drives you to volunteer so much of your time?

With the work that I do, I would have been financially much better off moving to Houston. But New Orleans is home. I am who I am because of New Orleans. The friends that I’ve made, they’re all here. And to be back in New Orleans and not be engaged in the community would be a waste of my efforts. I would also be missing one of the most gratifying things I could do in my life. What I’m doing in Lakeview, not to sound too dramatic, is the most important thing I’ve ever done. Period. And I feel so honored to be given the opportunity to do this. What gets any better than that?

What do you say to people still wavering about returning to Lakeview?

You better get moving soon. The way I look at it, Lakeview is having a big sale right now, but it’s not going to last for long. Everybody that lives here sees the day-to-day changes occurring. It’s growing every day.