Hoda Kotb: Where She Belongs

Hoda Kotb spotlights interesting and persevering people in a new book, and she returns to New Orleans for two book signings this month. 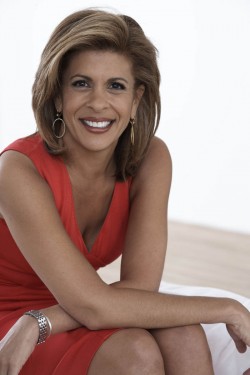 Hoda Kotb is at it again. The cherished co-anchor of the fourth hour of NBC’s The Today Show and The New York Times bestselling author is releasing her third book Jan. 5, and it’s the perfect read for those searching for motivation, inspiration and personal satisfaction in the New Year. Where We Belong: Journeys That Show Us the Way (Simon & Schuster, $25) is an enlightening collection of stories that center on interesting individuals with wide-ranging backgrounds — all who have discovered their life’s purpose, often surprisingly, and who are embracing their sense of belonging in the most amazing ways.

“I think a lot of us go through life and wonder if we are really where we are supposed to be — if we are where we belong,” Kotb says. “It’s so inspiring to me to meet and to talk to people who have found their sweet spot, and you know when you find it; it’s like a warm hand on your heart. You’re like, ‘Oh — I’m home.’ It’s like how I feel when I go to New Orleans. Certain things feel like home, whether it’s in a place, with a person, whatever your connect is. So hopefully Where We Belong will help direct people to find their spot.”

Intrigued by how others successfully found their life’s purpose, Kotb was propelled to write Where We Belong, using her journalistic acumen, and collaborating again with friend and writer Jane Lorenzini. The duo also co-authored The New York Times bestselling books Hoda: How I Survived War Zones, Bad Hair, Cancer and Kathie Lee and Ten Years Later: Six People Who Faced Adversity and Transformed Their Lives.

“Isn’t it fun when you meet someone who you know is just in love with what they do, or with who they are with, or with where they live, or with what they believe — it’s contagious!” Kotb says. “You’re like, ‘Oh my God, you are so happy, tell me, what is it?’ For so much of our lives, we’re swimming upstream; we’re struggling, and we think if we just push a little harder, it will get easier, if we just give a little more effort, it will pay off, and then one day, you ride a wave and you go, ‘Ok, this is what it is supposed to feel like.’ This is what it feels like when you’re not paying attention to time, because you are so in to what you are doing; this is what it feels like when you’re not fighting, but when you’re on the right path. I think this book, through these different stories, will help you find your own.

Everyone has their own way of getting to where they need to get, and, obviously, no one’s path is going to be the same, but you do see the same end result if you have the courage enough to kind of step out of what seems safe. People like to stay in the safe zone, because then you know what’s going to happen. There’s this saying that boats are safe in the harbor, but that’s not where boats are meant to be. So you kind of have to venture out of your comfort zone to see what you can come up with. I think that’s the common thread with all of these people in Where We Belong; they all had a desire and the strength to make a change. And look, the easier path is to not make a change — you’ll stay doing what you do; you’ll keep going; and you’ll be fine. But you don’t have to even totally change your life — you can add things to your life, and this book will help to promote that idea. No sane person is going to quit their job and venture off, because you need security, but someone said that a smart idea is to put 10 percent of your time and 10 percent of your money toward the thing you want to do with your life and that way you have your toe in, and little by little you can increase that until maybe your passion can become your profession. You just want to make sure you fulfill the life God gave you in the way you should. And who knows if you have, but you have to try to at least investigate it in your own head and heart. If you don’t think about it, you’re probably doing yourself a disservice.”

The compelling tales that Kotb included in Where We Belong feature individuals from all walks of life, as well as celebrities, such as producer Mark Burnett, actress and producer Roma Downey and comedian Margaret Cho. “If you read some of these stories, you’ll think to yourself, ‘You know what? If they can do it, I can do it,’” Kotb says. “If a young woman can pull herself up from a hard, terrible upbringing somehow, with everybody telling her she didn’t stand a chance at her dreams to somehow graduate from Harvard Medical School, then maybe readers will think okay, ‘What I want to do, whatever I want to do, is easy.’ Or if a ‘no kids’ kind of guy and his wife who thought they had everything because they had all the money in the world and spent their time skiing on the slopes of Aspen because they were retired in their 40s and were like, ‘Yay! What’s better than our life?Nothing!’ one day go to Haiti and meet an orphan, and then meet two, and then meet three, and then realize what a big hole they had in their lives, others can take inspiration from that story. I think sometimes we think we’re fine because we’re just marching in lockstep, and we don’t realize what we are missing until we find it. And the celebrities chapters feature people like producer Mark Burnett and Roma Downey; Mark, who is the brains behind all these big reality shows like The Voice and Survivor, decided to step onto more faith-based programming. Not only was he fulfilled professionally, but he was fulfilled spiritually. He found his groove, so I think you’ll find there are ways you can improve your life — in ways you didn’t even probably think about.”

As Kotb continues her own life journey, she holds tight to her personal dream of helping underprivileged children in a significant way. “I would love to do a camp for children,” she says. “For medical reasons, for divorce reasons, I wasn’t able to have children, but I want to fulfill that dream, because I can’t imagine my life without kids in it; it doesn’t seem right for me. When I lived in New Orleans, I met so many great kids. I loved them, and I remember thinking to myself, ‘If I could just somehow help these kids and make their life easier … ’ and I thought a summer camp would be a great way to do that. When you have purpose in your life, that’s really what it’s all about. You want to wake up with a purpose instead of wondering and drifting, and often you find purpose through helping someone else.”

Kotb is forever adored by New Orleanians due to her time spent as an anchor and reporter at WWL-TV CBS, beginning in 1992, when she formed an unbreakable bond with viewers — thanks to her genuine spirit, sincere charm, and the concern and love for New Orleans and its people, which permeated her work. She began the next chapter of her career as a Dateline correspondent in New York City in 1998, which she still does today, and she hosted the weekly syndicated show Your Total Health from 2004 to 2008. And since 2007, Kotb has co-hosted the fourth hour of TODAY along with Kathie Lee Gifford, and she has risen to the ranks of cultural icon, as evidenced by Kotb and Lee being spoofed on Saturday Night Live. Throughout her illustrious career, Kotb has earned multiple heavy-hitting awards including the Edward R. Murrow Award, the Peabody Award, the Alfred I. duPont-Columbia University Award and three Gracie Awards, and she is a three-time Emmy Award winner. Kotb’s passion and enthusiasm for her work seems to be limitless.

“I love my job; I love it!” Kotb says. “I really am having a lot of fun and enjoying this hour of TV, and I’m doing some little bits and pieces earlier on The Today Show, which is also a lot of fun for me.” In Feb. 2015, Kotb landed a radio show on The Today Show’s SiriusXM channel 108. The Hoda Show airs on Mondays and Wednesdays, and Kotb and her guests chat about topics such as dating, health and beauty, and she interviews celebrities. “Oh my God, I love that radio show,” she says. “I didn’t realize it could be so much fun. I thought it was going to be tons of work, but it ended up being a blast.”

Her current personal life even seems sliced right out of heaven. “I have a great boyfriend [Manhattan financier Joel Schiffman],” Kotb says. “I’m just happy. I hate to even say that things are going well because you’re like, ‘OMG, don’t say that!’ But you know what? So what! You only live once, and it’s a fun time in my life. I feel really, really blessed — I really do.” Kotb’s heart also belongs to her sweet little rescue dog, Blake, named after country music superstar Blake Shelton. “Oh my God, I love that dog!” Kotb gushes. “Blake Shelton who? I mean, please! I originally named my dog after Blake Shelton, because I was madly in love with Blake Shelton at that time, but now the love has shifted! Take that Gwen Stefani!”

Kotb will return to her adopted hometown of New Orleans for book signing appearances on Jan. 16 at 1 p.m. at Barnes & Noble in Metairie and then Uptown at 5 p.m. at the Garden District Book Shop. On Jan. 17, she has a speaking engagement at the LSU Health Sciences Center New Orleans. “I can’t wait to be back in New Orleans,” she says. And for Kotb’s legion of local fans, the feeling is mutual.