“We’re not perfect, but we’re in this together,” says Madeline Spiers, cheering on the students in her cycling class at Tour Cycle Studio. It’s a boutique cycling studio that she recently opened in the Warehouse District. 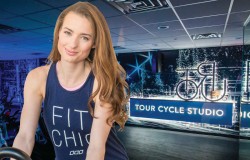 “Positivity is a key point at Tour,” Spiers says. “I want everyone to feel included — like a community.”
Spiers took her a winding path that brought her to where she is today. After graduating from St. Martin’s Episcopal School in 2010, Spiers moved to New York City. She interned at Peridance Capezio Center, working the front desk in exchange for dance classes. However, her rigorous dance schedule soon began taking a toll on her body. After a year, Spiers returned home to New Orleans when her mother was diagnosed with cancer.

While Spiers was still in New York, she had begun cycling at a SoulCycle studio. Now back in New Orleans, she couldn’t find a studio that offered something similar. So the idea to open a cycling studio in New Orleans began to take shape.

That idea never left her as she attended Loyola University New Orleans, where she studied political science and English. When she graduated in May 2015, Spiers faced a crossroads: go to law school or open the studio. She had the unwavering support of her husband Mark, and he assured her, “‘Law school is always going to be there, so let’s try it out,’” Spiers says.

At the age of 22, Spiers put plans in motion to open her own cycling studio in New Orleans, dubbed Tour Cycle Studio.

“Opening a business at 23 — that’s the real world,” Spiers says. “So many people my age tend to stay in school, especially my generation coming out of college where it’s hard to find steady jobs. We’re kind of forced to either go back to school or take this risk and do something that our parents wouldn’t have considered. So it’s definitely an interesting spot to be in right now.”

The name Tour Cycle Studio comes from tour, the French word for ride, which appealed to Spiers as she looked to incorporate some of New Orleans’ French heritage into her studio. After a few months, Spiers had decided on a logo and, in August, construction began. After months of making every design decision needed to bring her dream to life, Spiers opened the doors Nov. 23.

The studio, located at 860 Tchoupitoulas St., offers six classes per day with each class attending to varying interests and fitness levels in the hopes that people of all ages can come in for a workout.
“A young man came out of class last week and said, ‘You forget you’re on a bike,’” Spiers says. “I love that because that is what I’m going for.”

In its first week, Tour Cycle Studio welcomed more than 100 people as word of mouth continued to spread. While Spiers is mainly focused on building up this first location and expanding to 12 classes per day, opening more locations in the future also is on her radar.

Besides the initial idea and design, Spiers has been involved in nearly every part of operating the studio. From open to close, Spiers answers phone calls, handles public relations and marketing, trains the staff, teaches five classes per week, cleans the space, and even does the studio’s laundry at her home each night — all for the love of her business.

“I wanted to see my customers and know them by name, and scrub the floors, clean the toilets — I wanted to be in every aspect of the business,” Spiers says. “Not only can I hold others accountable, but I can make sure that my customers are getting the very best and that everything is to the standard that I hold for myself.”

Despite having opened her first business at age 23, Spiers doesn’t consider this her biggest accomplishment. Instead, she brings the focus back to her family, particularly her husband and two 10-year-old stepchildren, who were a key inspiration behind why she pursued starting a business in the first place.

“I saw how if I owned my business, yes, I’m putting in 14-hour days right now,” Spiers says. “But hopefully if I can grow it and work really hard now, in a few years’ time, I’ll be able to control my schedule, and take the kids to school, and really kind of have it all in that sense.” tourcyclestudio.com

1.12K
previous Ray Gumpert: A Passionate Palate
next Hoda Kotb: Where She Belongs