The Marvel of Mardi Gras

This over-the-top celebration has a rich history that brings in nearly $500 million to the City of New Orleans annually. 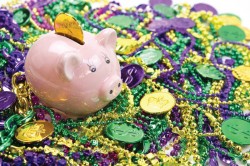 For about two weeks every February or March, New Orleans plays host to one of the biggest parties in the world. Mardi Gras, and the entire Carnival season, is a celebration of food, drink, family and just about anything else fun. Our city’s first Mardi Gras parade took place 179 years ago, and we haven’t stopped celebrating ever since.

Mardi Gras is now a huge economic driver for the city, generating nearly $500 million dollars in revenue annually. A study conducted by Tulane University Professor Toni Weiss shows just how positive an impact Fat Tuesday has been. According to the study, Mardi Gras created a total impact of $465 million for the city in 2014. Breaking this down further, $164 million came from direct expenditures such as hotel costs, food and beverages, and Krewe membership fees. Thanks to all this spending, New Orleans collected an additional $17.5 million in tax revenue. During Mardi Gras, New Orleans sees 1.4 million visitors; that’s nearly four times the city’s population! So this brings into question: How does Mardi Gras stack up against other celebrations across the world?

New Year’s Eve in New York City is one of the most well-known holiday celebrations, just those few hours in Times Square attract 1.4 million spectators. Not bad, but New York City’s population is about 22 times that of New Orleans. New Year’s Eve is only a day long though, not the two weeks generally observed for Carnival — so, can anything else compete? Well, about 5,000 miles across the Atlantic Ocean, Germany’s Oktoberfest may just beat Mardi Gras. The weeks-long celebration in Munich attracts more than 6 million visitors and creates an economic impact of nearly $1.2 billion. It is worth noting however, that Oktoberfest accounts for less than 1 percent of Munich’s GDP, while, according to professor Weiss’ study, Mardi Gras contributes 2.2 percent of New Orleans’ GDP. That’s a big deal. The only other Mardi Gras celebration to rival ours is Brazil’s Carnival, which hosts 1 million visitors annually.

For New Orleanians, Mardi Gras is a special time, and, while each person’s individual experience varies greatly, parades are obviously the central theme. Much like Mardi Gras itself, parades have become a business all their own. Kern Studios is the leader in parade float production, creating Rex, Zulu and many other of the biggest parades. The studio nets nearly $2 million creating and maintaining the floats each year. Krewes themselves are big sources of money too. Since Krewes operate as 501(c)7 non-profit organizations, they must spend nearly all of their collective millions on their respective missions (celebrating Mardi Gras). Krewes get their money from membership dues, which isn’t cheap. Members may end up spending over $10,000 each year on dues, throws and costumes. Many krewe members are university professors, lawyers, doctors, etc., so the expenditure is well worth it to all.

Yet, for such a great benefit, there has to be a cost. Anyone who has walked down St. Charles Avenue during Mardi Gras knows of the beads, beer cans and urban detritus left behind. Many of us are probably familiar with the sight of bulldozers pushing quite literally tons of purple, green and gold throws down the street. The total cost of this clean up: nearly $2 million. While 1.4 million people party, the city’s fire, police and EMS personnel continue to do their job as well, and, since it’s a holiday, collect overtime, and, at certain points, double overtime and a half. Yet we owe these first responders a round of applause during Mardi Gras. New Orleans EMS for example, responds to a 911 call every six minutes, for the 10 days of festivities. Public safety is a cost every tax payer should feel happy to cover.

If we look at Mardi Gras as an investment by the City of New Orleans, it is a very smart one indeed. Clean up costs, police, fire,and EMS protection only add up to a few million dollars, which, considering the hundreds of millions of dollars that Mardi Gras brings in, results in an outstanding return on investment. Here’s the thing though: Mardi Gras transcends the world of business, and, honestly, Mardi Gras is an experience so unique that no business model, spreadsheet or case study could every truly capture everything that Mardi Gras contributes to New Orleans. I would argue that the $465 million is simply a fantastic side effect of what is known as the world’s biggest free party. I believe Mardi Gras would still happen regardless of the bottom line, but it’s nice to know that Mardi Gras is perhaps the world’s biggest win/win deal. And on that note, I wish everyone a happy and safe Mardi Gras.

The History Behind Mardi Gras Mystery
The doubloon has been one of Mardi Gras’ most treasured keepsakes since 1964 when it was introduced by the Krewe of Rex founder, H. Alvin Sharp. At that time, Sharp didn’t know how well the idea of doubloons would be received, so he left the date off of the coins. This is the only time in the doubloons’ parade history that the date has not been engraved — so they are therefore one of the most sought after and extremely valuable Mardi Gras souvenirs. The doubloon is one of the most enduring symbols of Mardi Gras, and many have become collector’s items. Doubloons are stamped with the different carnival club logo on one side and the parade’s theme on the other. That means that no two clubs have doubloons that are exactly alike. And, each year they are different as well.

Throws, to the uninitiated, are items tossed by krewe members to the awaiting crowds. Throws were originally cheap necklaces or glass beads, but have since evolved to everything from novelty cups to light-up sunglasses. Parades often choose celebrities to star as their king or queen. Will Ferrell, Maroon 5, Britney Spears and Larry King have all served as Mardi Gras royalty.

The full Mardi Gras season, also known as Carnival, officially begins Jan. 6 with the Joan of Arc parade through the French Quarter. The krewes of Zulu and Rex officially end celebrations Mardi Gras morning, which is the day before Ash Wednesday.

The Mardi Gras Indians, known for their phenomenal hand-crafted costumes, begin work on their garb up to one year in advance, making Mardi Gras a year-round dedication.

King Cake is just as much a part of Mardi Gras as brightly colored beads. New Orleans goes through hundreds of thousands of cakes during Mardi Gras, giving the pastry a special place in the city’s heart.

653
previous Toy Story
next Legal Profile: Planning Is Everything