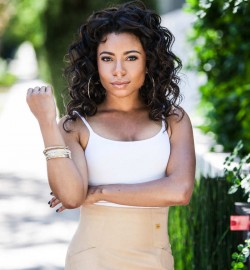 After portraying a solo Bureau of Alcohol, Tobacco, Firearms and Explosive agent who worked with Special Agent-In-Charge Dwayne Cassius “King” Pride (Scott Bakula) and his top-notch team in season one of NCIS: New Orleans, Shalita Grant became a part of the team and a regular on season two, now starring as quick-witted Special Agent Sonja Percy. As a result, the actress who received a Tony nomination for Best Featured Actress in a Play for her role as sassy voodoo-practicing housekeeper Cassandra in the Broadway smash hit Vanya and Sonia and Masha and Spike — and who worked in television in break-out roles on shows such as Bones, The Good Wife and Melissa & Joey — now calls New Orleans home, while she films season two of the popular show, which airs Tuesdays at 8 p.m. on CBS. And Grant is seriously enjoying her work.

“I absolutely love my job,” she says. “Everything we are doing right now will hopefully get syndicated because these shows become a part of your national consciousness. It’s really cool being a part of the NCIS franchise because you know people will love these shows. They make them a part of their routine so you become a family member.”

After mainly working alone undercover for ATF conducting gun and drug busts, Sonja Percy is happy being a part of the NCIS team now. “In season two she’s becoming acclimated to being on a team versus being alone,” Grant says. “It’s amazing when you get the thing you say you want and then it turns out you have to actually work even harder. Sonja realizes she has to ask permission for things after being so independent, so she’s got a learning curve. And the team is really close knit so you have to share personal information. In episode six we saw her go undercover again and saw how much she actually needed the team; she could have drowned but they saved her life. It’s great and I appreciate that the writers didn’t make it really easy for her at first. You have to get with the group.”

Grant appreciates that the show’s writers give the actors leeway regarding their characters’ attributes. “In the beginning the writers were like, ‘What are you good at that we can utilize?’ I really wanted them to show how physically strong I am. In Hollywood, women are pushed to be really thin and that’s a problem. When I moved to California I was easily a size two or four, which is great for the average woman, but going to these auditions and seeing who booked the jobs, well, physically I don’t look like that. So I had to make the decision that, ‘Well, I won’t get that thin, but I will get strong,’ and I started lifting weights. I love the way weight training changed my body. It’s a very functional body and, with weights, you have to eat. That was more valuable then starving myself.”

NCIS: New Orleans has indeed highlighted Grant’s capable and strong physique, and she does almost all of her stunts. “I am a woman doing a job that is heavily dominated by men — chasing bad guys, taking them down, cuffing them, shooting guns. But there are women who do that job every day in this country that have to be just as strong if not stronger,” Grant says. “In my first episode in season one, they had me running and they weren’t sure if I could do it. In rehearsal, Lucas Black (Special Agent Christopher LaSalle), was like, ‘Oh, I’ll take it easy on you!’ [Laughs] By the time he got outside, I was already scaling the fence so he was like, ‘Oh my God, that’s awesome!’ And the crew was ribbing him and Scott, saying, ‘Oh my God, you let that little girl out run you!”

Early on, Grant took a stand with co-star Zoe McLellan (Special Agent Meredith Brody) to work together instead of becoming adversaries to each other. “I wanted Zoe to know early on I wasn’t competing with her. She was like, ‘I’m fine, I’m secure in my job, we’re good.’ In season two, the first director gave me a note that looked like it could have been the start of a girl beef and I said, ‘No, I’m not doing that,’ and the fans really liked that. The writers and producers have given the fans what they wanted. You see a lot of me and Zoe working together, joking on Lucas, having a good-natured friendship and kicking a lot of ass together.”

Grant has become accustomed to life in the city, potholes and all. “I had my Prius, shipped to me here in New Orleans from L.A.,” she says. “In L.A. the trendy thing to do is have a car that’s environmentally sustainable and easy on gas, and I just thought, ‘Oh no biggie, just bring my Prius, it’ll be fine’ — and that poor car! Sometimes I look at the potholes and I’m like, ‘Are you going to make it out? Are you going to be able to do this?’ I’m sincerely considering an SUV, something I never thought I’d drive but now I need a vehicle that can off-road essentially because that’s what it feels like!”

Grant acknowledges that New Orleans is an important character in the show. “You can’t do New Orleans anywhere but in New Orleans,” she says. “It has so much character. The way the residents express themselves with their homes is unique. You can tell this person is a Saints fan because their house is decked out in black and gold. And the people of New Orleans are a trip. It’s not like L.A. or New York. The people really love their celebrities but are very ordinary about it. I went to JCPenney and the cashier asked if I was on NCIS: New Orleans. And I said, ‘Yes,’ and she said, ‘I knew it! I never forget a face!’ Then she said, ‘Oh, can I see some ID?’ She ID’d me even though she knew exactly who I am! [Laughs] So no real celebrity treatment there, you know what I’m saying!”

Currently, Grant is featured in PBS’ new six-episode Civil War dramatic miniseries Mercy Street, which debuted Jan. 17 and airs Sunday nights at 9 p.m., playing free slave Aurelia Johnson, who works as a laundress at the Union-occupied Mansion House Hospital in Alexandria, Virginia. “It’s based on a true story and set during the Civil War in 1862,” Grant says. “For black people, it wasn’t a guarantee that you will always be with your biological family. The reason many free black people stayed in the South was because they were close to their family members and would wait until their master potentially set them free. Aurelia doesn’t want to go any further north than Alexandria because she wants to be reconnected with her son and her mother. It’s a complex story, and I enjoy being very subtle. In a way, she’s a background character. The stars are the doctors, the soldiers. In the first episode I don’t say much, but, in the second episode, Aurelia’s living a big life. I think that speaks to our humanity in general. Everyone is the star of their own life’s story; no one is a secondary character in their life. So when you see people and you assume they are throwaways, you have no idea what their life is and what’s happening with them. That’s one of the things I like about Aurelia.”

In her free time, Grant is involved in philanthropic efforts through her work as the celebrity spokesperson for The People’s Institute for Survival and Beyond, which functions to address racism and oppression in order to create a more equitable and just society. And like many in New Orleans, food is Grant’s pastime. “When I have spare time, I eat,” she says, laughing. “One of my favorite places is Bacchanal; I love it! Oh the food is so good in New Orleans. I’ve come to the right place.”