If any New Orleans local or visitor has wondered what craft cocktails are all about, they can head over to DrinkLab and its next-door neighbor Victory, both of which are owned by bartender, entrepreneur and craft cocktail connoisseur Daniel Victory. 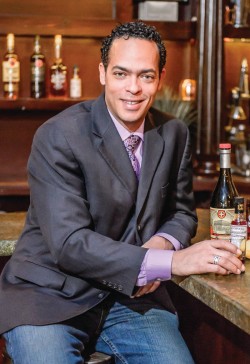 “I saw an opportunity in New Orleans to reach out to people in the way I knew best, which is bartending,” Victory says.

Victory’s bartending journey began in 2000 at The Fairmont New Orleans hotel’s Sazerac Bar (now The Roosevelt New Orleans). He later transitioned to the new hotel across the street, The Ritz-Carlton, New Orleans. Victory opened his own wine bar, The Wine Loft, among the earliest wine bars in the city, and then left the spirits business for a short while.

After Hurricane Katrina, Victory returned to The Ritz-Carlton, and his career began taking off as he won the Bombay Sapphire Gin & GQ Magazine’s Most Imaginative Bartender competition in 2008 and 2009. At that time, Tales of the Cocktail was in full swing, and Victory was able to mingle with industry bigwigs. In 2009, Victory was named Bartender of the Year by New Orleans Magazine.

As he gained notoriety, Victory was also experimenting with cocktail creation and was a key member in the early expansion of the craft cocktail trend that has since taken New Orleans by storm. When Victory couldn’t obtain the more exotic ingredients needed for his cocktails at The Ritz-Carlton, he decided it was time to open up his own bar.

In 2010, Victory began construction on his bar, aptly named Victory, and in September of that year brought into the world a set of twins. The next month, he threw his first party at the newly opened Victory. “So basically, at the same time, I had three babies at once,” Victory says.

After signing on a new partner in 2012, Victory’s craft cocktail bar dream took off, and Victory — both the bar and the bartender — began receiving both local and national accolades.

In 2014, Victory participated in the Goldman Sachs 10,000 Small Businesses program, and there he learned something crucial about himself that would set his career path on a slightly different course.

“I learned that I was a bartender that opened a bar, not a businessman, and so they put me through the ringer for a solid three months,” Victory says. “I learned about how to run a business, and less about how to bartend. So at that point, it really opened my eyes as to what I can do.”

With the help of his Goldman Sachs advisors, Victory created a growth plan to help the bar drive revenue and increase employees. By 2015, he was able to start his next venture, DrinkLab, separated from Victory on Baronne Street in the Central Business District only by a wall and an address number.

DrinkLab officially opened its doors in Oct. 2015. The concept differs from an institution like the Crescent City Schools of Gaming and Bartending, wherein professional and aspiring bartenders attend classes for weeks to earn certifications. Victory would know — he taught there, while working at The Ritz-Carlton.

Instead, DrinkLab resembles the experience of a hands-on cooking class, where master bartenders teach the fundamentals of bartending, such as how to stir and shake cocktails, how to use common tools or the profiles of basic ingredients like bitters and syrups.

Attendees also learn how to appreciate the smells and flavors of a cocktail, what goes into a bartender’s creation, and the history and recipes behind classic New Orleans cocktails, like the Sazerac, Ramos Gin Fizz and Hurricane.

“I wanted to do kind of the same thing, for the tourists and locals to come in and learn how to make cocktails, specializing in the craft cocktails of New Orleans classics,” Victory says. “We’re supposed to be the birthplace of the cocktail, so I think cocktail classes definitely have a place here.”

DrinkLab also offers an advanced program for bartenders “who really want to learn what the next step of bartending is,” Victory says. “To me it’s all about educating the younger generation coming up.”

As far as Victory’s own favorite cocktail goes, he loves the spirit and innovation that go into the process. “There’s not any cocktail that someone will make for me that I will not like,” Victory says. “If you put passion behind the cocktail-making, I love it.”

1.15K
previous Dr. Ashley Geoghegan: When Integration Is Key
next Full Speed Ahead