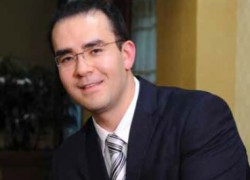 Physicians often maintain a sense of wonder and awe of the human body, and that has been a key driver in the career of Dr. Aaron Dumont, the Charles B. Wilson Professor and Chair of the Department of Neurosurgery at Tulane University, since he first decided that he wanted to become a physician back in elementary school.

“It was just fascination with the field, understanding the human body and the brain especially, and then the opportunity to make the care of patients better tomorrow through teaching the next generation as well as through research,” Dr. Dumont says.

In 2000, Dr. Dumont earned his M.D. from the University of Calgary in Canada before being a surgical intern and later neurological surgery resident at the University of Virginia. He also completed a fellowship at UVA in cerebrovascular, endovascular and skull base surgery.

According to Dr. Dumont, neurosurgery is a “challenging” and “exciting” field, and it became his passion.

“What drew me was my fascination with the brain because we know so little about it — it’s such a delicate structure,” Dr. Dumont says. “And the potential to learn more about it, ultimately to help people, drew me to the field.”

With many years of education behind him, Dr. Dumont wears many hats these days: chair of Tulane’s Department of Neurosurgery; clinician; researcher; professor; physician leader; and editor of various prominent journals in his field.

After serving as faculty, administrator and clinician at the University of Virginia and Thomas Jefferson University, Dr. Dumont came to New Orleans in 2013 to work with Tulane University in its hospital, clinics, school and research laboratories.

As a clinician, Dr. Dumont works at Tulane Medical Center downtown, Tulane Lakeside Hospital and East General Jefferson hospital — and associated clinics at those sites. He sees patients suffering from various brain and spinal disorders, from brain aneurysms and tumors to epilepsy and disorders of the spine along the neck and back (such as scoliosis).

Common treatments Dr. Dumont performs include brain surgeries to fix aneurysms by sealing them off or preventing them from bleeding, either through a craniotomy, which is traditional open surgery of the brain, or through the use of catheters — and that’s where Dr. Dumont’s 16 years of research comes in handy.

“We’re interested in the role of inflammation in the formation and bleeding of aneurysms with the goal of potentially developing medical therapy or minimally invasive therapies,” Dr. Dumont says. “There is no current medical therapy for brain aneurysms — it could bleed, and, if it bleeds, there’s a high chance of dying.”

In addition to teaching today’s neurosurgeons about innovative treatments through his research, Dr. Dumont also directly impacts the neurosurgeons of tomorrow in his role as professor for the residency and fellowship programs in neurosurgery at Tulane. He is also a clinical professor for Tulane’s Department of Pediatrics.

Dr. Dumont holds a number of administrative roles at Tulane besides chairing his department, including serving on the Tulane University Medical Group Board, directing the telemedicine program, and being part of the medical executive committee and strategic planning committee. At EJGH, Dr. Dumont also is the medical director of neurosurgery and a member of the capital budget committee.

Continuing to build Tulane’s Department of Neurosurgery — including clinical care and the residency training and research programs — remains a primary goal for Dr. Dumont as his career in the ever-evolving field of neurosurgery progresses.

“I’m absolutely committed to the current and future care of patients,” Dr. Dumont says. “That means taking care of today’s patients, but also being committed to the training of future generations of physicians, and neurosurgeons specifically, as well as conducting research that will translate into improved treatments for the patients of tomorrow.”
Aaron Dumont, M.D.
Tulane University Department of Neurological Surgery
131 S. Robertson St., Ste. 1300
New Orleans, LA 70112
(504) 988-5565