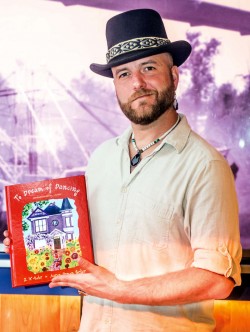 “Creator of stories and wonder — that’s really what I want to give the world,” says Zachary Mohr, author of the children’s book series Desdemona’s Dreams, founder of Desdemona’s Dreams, LLC and published poet. Mohr’s early love and appreciation for storytelling began with his mother reading him stories and fairytales every night by the vintage fireplace in their home tucked in the mountains of California.

“I just found such power in the stories that I really had no choice — I found I had to be creating my own,” Mohr says. “When I got to be in my 20’s, I decided it was the road I was going to take; that I wanted to share stories with the rest of the world.”

In California, Mohr formed the Knickerbockers, a troupe that set spoken word poetry to music. This gave way to Mohr eventually pursuing solo poetry performances. In the meantime, he was also creating a fairytale world spun across hundreds of pages of poetry, which would surface in years to come.

In 2008, Mohr moved to New Orleans and performed his first slam poetry at the Tennessee Williams Festival. He made a number of friends involved in the arts, including one fellow poet whose close friend and roommate would become the artist who brings Mohr’s fairytale world to life.

“[The book] is about finding the beautiful in the absurd moments and being able to express it and share it with people so they feel like they’re on the journey of my life with me,” Mohr says.

Next, Mohr would share with the world the fairytale he had been creating for years, which he had illustrated by local Jackson Square artist Aaron Damon Porter, owner of Damon Arts NOLA.

Desdemona’s Dreams is a multivolume children’s book series, and the first installment, To Dream of Dancing, launched last month with a book signing at Maple Street Book Shop.

The series stems from Mohr’s hundreds of pages of poetry about “a little girl named Desdemona who could bring her dreams into the real world and her discovery of why,” Mohr says. While the series is for children, Mohr believes its overarching theme — the importance of dreams — will resonate with parents reading the book to their kids.

To create To Dream of Dancing, Mohr took a segment of the long-form poem and began transforming the lines of poetry describing Desdemona in the real world into prose, while leaving her dream world experiences as poetry.

“It creates a difference in the physical world of the literature itself for whoever is reading it,” Mohr says. “It immerses you even more into the dream and creates even more of a sense of wonder to me in the way it flows.”

Mohr is currently writing the prose pieces for the second book in the series, and being a one-man marketing and promotions team for To Dream of Dancing. His company Desdemona’s Dreams, LLC will be involved in sales for all of the books in addition to related memorabilia, such as individual prints of Porter’s artwork.

While his topical pursuits may vary widely, Mohr remains dedicated to the writing craft and his love of storytelling.

“I know people feel a little bit of a silliness when they look and are like, ‘Finding God in the Wetspot and then children’s books?’” Mohr laughs. “And I’m like, well, you know, everyone’s diverse.”

In his defense, Mohr cites Shel Silverstein, who worked for Playboy, and Dr. Seuss, who wrote and illustrated an adult picture book. “If anyone has a question in there, I use them as a reference,” he says.

This month, book signings for Desdemona’s Dreams will be held at Nola Kids on April 2 from 12-3 p.m. and at I.J. Reilly’s in the French Quarter on April 9 from 12-3 p.m. facebook.com/desdemonasdreams

495
previous Letting in the Light
next Dana Henry