He thought he wanted to be an emergency room physician. 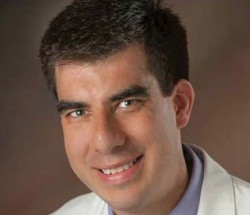 If anyone had suggested Dr. Stephen Landreneau would end up teaching gastroenterology after medical school, he would have assumed they were crazy. Flash forward 15 years and he can’t imagine being anywhere else.

Over time, the camaraderie and shared-purpose aspect of training in academic medicine hooked him. When he finished his fellowship at the University of South Alabama, he realized he would miss working with residents — so coming back home to New Orleans and LSU was a win-win situation. (Don’t tell his patients, but the students Landreneau works with as an Assistant Professor of clinical medicine in the LSU Department of Medicine’s Gastroenterology program are just as important to him.)

“Most days, I learn as much from my students as they learn from me,” Dr. Landreneau says. “A lot of their questions are very detailed and so on point, it requires me as a teacher to read daily and stay up on the treatments and technologies as they become available. It makes me a better physician.”

His second passion is helping his patients prevent colon cancer. His grandfather died of colon cancer when he was in his second year of medical school and that — along with the relationships he knew he would forge through the continuity of patient care as well as his early morning volunteer position in the Our Lady of the Lake GI Lab while an undergraduate — drew him to gastroenterology.

“Colon cancer prevention is so important because it’s the third most common cancer for men and women, yet it’s mostly preventable with a routine colonoscopy,” Dr. Landreneau says. Prevention is goal one. Since most colon cancer begins as a benign polyp, removal during a colonoscopy is a routine early treatment that arrests further growth.

Whether you’re seeing him for heartburn or hepatitis, gallbladder or gut issues, Dr. Landreneau is going to take a history for colon cancer risk. “Their heartburn will be addressed, but if I’m going to treat their heartburn in the short term, I don’t want them diagnosed with colon cancer down the road.” So if you’re 50 and average risk, he’s going to make sure you’re putting a colonoscopy on your schedule. If it runs in your family, you’ll need one sooner. For those with disorders of the pancreas, bile duct or with large polyps, Landreneau can help with those as well as he has interests in endoscopic ultrasound and advanced endoscopy.

All of Landreneau’s patients also get information on a healthy diet that’s high in fiber and low in red meat as well as advice on an active lifestyle that avoids smoking.

Landreneau’s workload doesn’t stop there. He’s also active with the American College of Gastroenterology where he teaches at the annual convention and chairs one of its national committees. “It can get political, but it’s worth it,” he says. “We have to have leaders in our field take part in national politics. Someone has to advocate for our patients in Washington and with regulations in healthcare.”

He does it all with the inspiration of his family — especially his mom, who is a nurse, and his wife, who is patiently raising their 3-year-old twins. He says he is grateful for his work-life balance.