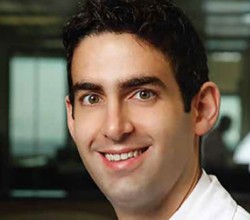 After a recent 16-hour surgery to remove an exceptionally large tumor from deep within the brain of a very young woman, Dr. Peter Amenta left the operating room exhilarated. “It was exhausting — physically and mentally demanding — but she had a great outcome,” he says. “That was a really big day for me.”

After medical school and nine long years of neurosurgical training, Dr. Amenta is happy to be hard at work making a difference in the lives of his patients. “I find my career very rewarding,” he says. “It was a long training process, so finally being able to put it to good use and see good outcomes is very rewarding. Having patients come back … feeling better … their tumors cured on follow-up imaging … it makes it worth it.”

Variety is Dr. Amenta’s favorite aspect of neurosurgery. No two tumors are alike. No two stroke treatments are the same. Certain diseases affect the brain in vastly different ways.

In addition, he relishes the challenge of accessing what, at one time, were inaccessible areas of the brain. “The skull base is a barrier to the brain,” he says. “Tumors and vascular problems at the base of the brain are difficult to approach.” These structures control sight, swallowing, hearing, facial mobility and other critical functions. Treatment of pathology affecting these areas often requires advanced surgical techniques and long operative times.

Though it’s been a long time coming, Dr. Amenta knew where he was headed from a young age. “I was always interested in medicine and the sciences,” he says. “And I come from a medical family. My father and grandfather were very influential in my choice.” His father was the Dean of Robert Wood Johnson Medical School in New Jersey and is now the CEO of Joslin Diabetes Center in Boston. His grandfather was a family physician in Philadelphia.

One look at the inner-workings of the brain in first year neuroanatomy class was all it took to hook him on the idea of neurosurgery. “To see the brain is so inspiring,” Dr. Amenta says. “The fact that it is both so delicate and so complex … it’s amazing. What I really enjoy about neurosurgery is that you have to understand the anatomy and physiology, and then apply it to real-life clinical scenarios. You have to use the patient’s signs and symptoms, neurologic exam, the pathology and the imaging to establish a surgical plan. Finally, as a surgeon, I have to execute the plan in the operating room.”

Dr. Amenta and his partners — Aaron Dumont, MD, and Ricky Medel, MD — are all dual-trained vascular neurosurgeons able to us both open surgical and minimally invasive endovascular approaches. This makes them uniquely skilled to consolidate care and to handle everything from aneurysm repair and arteriovenous malformations to cerebral bypass and tumor removal. They commonly handle acute stroke patients by opening the clogged blood vessels of the brain with combinations of catheters and stents.

All three physicians are also involved in resident education, and they teach daily in the operating room and on rounds. They also lecture medical students in the same type of neurology class that first captured Dr. Amenta’s attention when he was in medical school.

Outside of work, he says he enjoys spending time with his wife and 20-month-old son, and exercising. “But I never really stop doing the job,” he says. “I work at home. I read, submit articles to journals and write book chapters. I’m always trying to do more academically.”

And nothing can stop his thirst for knowledge. “The brain and spinal cord and how they work … there’s so much we don’t know,” Dr. Amenta says. “We have to keep building on our knowledge. There’s a lot yet to be discovered.”