Moving from cookie-cutter suburbia to New Orleans soul meant some changes were in order. 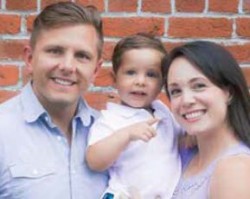 I grew up in a neighborhood where all the houses looked the same. In my hometown, everyone owns a golf cart and you can get virtually anywhere in the city limits by means of golf cart paths that weave through cookie-cutter neighborhoods and dense forests. It’s been listed on Money Magazine’s 100 Best Places to Live in the United States multiple years — citing that the public school system is good and the crime rate practically zero. It’s a happy place, and we call it “the bubble” because it seems immune from the adversarial elements that plague so many places. So, when people asked me how I liked New Orleans after I moved here, I replied with, “Well, it sure is a culture shock!”

I met a New Orleans boy in college, and, because New Orleans boys never leave, moving here was a non-negotiable. Because I loved him, I tried to love his city. But I’ll admit I didn’t like it here at first.

Living here meant I had to learn a new language.

Things my husband said often didn’t translate…
Him:  “Hey babe, where y’at?”
Me: “Um, in the kitchen?”

How was I supposed to know that where y’at means how are you? I just assumed that the private school his parents paid good money to send him to didn’t teach him the proper way to ask someone where they were.

New Orleanians also tend to rearrange words, and I got so used to hearing it that I started to incorporate it into my own speech patterns. I about fell on the floor when the words, “Why you don’t want that one?” came out of my mouth. If you’re from New Orleans, you may not even see what’s wrong with that sentence. I used to giggle to myself when my native New Orleans friends would say things like “My son just made nine!” or “The parade is for seven.” And when I’d point out that something was different about what they were saying, they’d respond with, “Well, how else would you say it?”

Living here meant I had to greet people differently.

The first time a male kissed me hello, I looked over my shoulder to see if my husband was flashing a jealous look, but I noticed him kissing people hello too. It must just be another NOLA thing!

Living here meant I had to be aware of my surroundings.

I used to put my purse in the shopping cart at the grocery store, or simply the grocery if you speak New Orleans, and stand three feet away while I checked out the label on the tomato sauce (translation: red gravy) that I was considering purchasing. This was until my husband pointed out that I couldn’t be so naïve about my surroundings. I was no longer in Pleasantville, land of zero crime, and I actually had to keep an eye on my wallet if I didn’t want it to be stolen.

Living here meant I sometimes felt like I was living in a third-world country.

My friend visited my house in Lakeview after traveling to Haiti for a medical mission trip. She informed me that the roads outside my door were far worse than the dirt roads in the poorest country in the Western Hemisphere. Awesome. Oh, and water-boil advisories? Yeah, we don’t have those where I’m from.

At some point though, this unique and vibrant city got into my heart and I started to see all the imperfections as character. New Orleans may be bad on paper when you consider the crime, corruption, blighted properties and the weak public education system, but somehow the city makes up for it with everything else. You know what else they don’t have where I’m from? Soul.