From Twelfth Night (Jan. 6) through the end of February, the Greater New Orleans area will be celebrating all things purple, green and gold. Why not spend your weekends watching the parades, rolling down the routes and taking advantage of all they have to offer? Laissez les bon temps rouler! 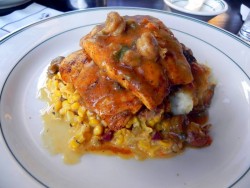 Lunch at: What could be finer than scoring optimal, parade-gawking seats on the corner of Napoleon and St. Charles avenues? How about slurping a dozen raw Gulf oysters or a frozen pomegranate mojito at Superior Seafood & Oyster Bar, while you wait for Oshun to roll? Open for four years in the spot that once housed Copeland’s, Superior Seafood has become a most welcome addition to the New Orleans dining scene. Bolster your belly for the inevitable imbibing ahead with bacon-wrapped scallops, fried green tomatoes topped with crab meat, a fried oyster po-boy or blackened fish Napoleon with crawfish étouffée, whipped potatoes and corn maque choux. 4338 St. Charles Ave., (504) 293-3474, superiorseafoodnola.com

Pay homage to: You won’t want to miss the Mystic Krewe of Hermes, a group that has paraded since 1937! Almost 80 years old, Hermes continuously upholds an emphasis on “craftsmanship, detail and story” when creating its floats and planning its annual events. Like several of the other old-school krewes, Hermes has long celebrated during the entire Carnival season hosting a Walking Parade in the French Quarter (before the big one down St. Charles Avenue) where members dressed in suits and ties exit various restaurants loaded with throws to gather on Royal and St. Louis streets. Led by a high school marching band, the members stroll through the Quarter, throwing out beads to onlookers, on their way to dress for the big parade. Hermes rolls Feb. 24 at 6 p.m. semrehcl.accountsupport.com/home.html

Sip at: Open now for more than 13 years, The Delachaise is a cozy, narrow wine bar and restaurant owned by Evan Hayes that has long been a hit with oenophiles and foodies alike. Appearing somewhat like a streetcar itself, The Delachaise on St. Charles Avenue is frequently a spot to lounge, sip great wines by the glass and nibble — all while watching the real streetcars rumble by, and, during Carnival, this atmosphere is even more coveted than usual. Set your lips to Norton Reserve Malbec from ’06 or a Soucherie Chenin Blanc ’07, while nibbling goose-fat fries with steamed mussels and watching the rambunctious crowd brave the flying beads. You may have to pay a cover on such a busy night, but it will certainly be worth it. 3442 St. Charles Ave., (504) 895-0858, thedelachaise.com

Revive at: Get your fill of caffeine at Krewe Du Brew, a seasonally appropriate-named coffeehouse opened by John Hagan, Eugene Anderson and Adrian Guy in 2012. This comfortable java shop offers specialty coffees like cafe au lait, cappuccino, espresso and white mocha lattes brewed from beans by local roaster Try Me Mills in Bywater. They also feature both sweet and savory pastries, bagels from Laurel Street Bakery, breakfast sandwiches and paninis. Take advantage of this fleeting moment where you can relax in a well-cushioned chair and sip a cup of joe before the madness begins again. 1610 St. Charles Ave., (504) 522-1530, krewedubrewnola.com

Throw your hands in the air for: Formed by a group of Loyola University students in 1969, the Krewe of Tucks story began at Friar Tuck, an Uptown pub, “where two college students decided to create their own carnival krewe after unsuccessfully trying to become white flambeaux carriers.” Unlike many of the older krewes, Tucks has no restrictions on membership, accepting people who simply want to have a great time and put on a great show. With more than 1,300 members and an extremely laid back attitude, Tucks is known for its “irreverence,” and its aim is simple … to have a really great time. The theme for this year’s parade is Tucks Happens! Tucks rolls Feb. 25 at 12 p.m. kreweoftucks.com

Dine at: If you’re seeking a high-end respite from rowdy parade-goers and you just happen to be dressed to the nines, why not pop into (or better yet, make reservations at) Emeril’s Delmonico? The menu is inspired by classic Creole cuisine, and, at the hands of Anthony Scanio, it will surely be a revel to remember. Start with house made charcuterie like capocollo or duck prosciutto paired with artisan cheeses from as far away as the Netherlands and as close as Tennessee. Move on to stuffed boudin balls, fried Point Judith calamari or a roasted beet salad — and don’t forget an entree of Louisiana drum meunière or paneed veal bordelaise. 1300 St. Charles Ave., (504) 525-4937, emerilsrestaurants.com/emerils-delmonico
Sunday

Breakfast at: By Sunday, you’re probably running low on funds (as well as stamina), so get fueled for an eye-opening price at The Trolley Stop. Don’t expect anything special or unusual aside from courteous servers and plenty of ridiculously inexpensive food. Literally stuff yourself on bacon, sausage patties, grits, eggs, French toast, loaded waffles, pancakes and biscuits … try not to act too surprised when the bill comes — you’ll see the need to tip big. The Trolley Stop also offers lunch and dinner items like burgers and fries, seafood platters, soups, salads and anything else you’d find at your average diner, but the New Orleans vibe shines through with gumbo, red beans and catfish. The Trolley Stop is open 24 hours per day and 7 days per week, so, if you need to, you can come back for breakfast again at midnight. The best part? An endless cup of coffee that will carry you through yet another day of parades. 1923 St. Charles Ave., (504) 523-0090, facebook.com/the-trolley-stop

Be dazzled by: Easily one of the most recognized parades of the year, Bacchus is a huge yearly blowout that happens every year the Sunday before Fat Tuesday. Named after the Greek god of wine and cheer, the Krewe of Bacchus was established in 1968 when Owen “Pip” Brennan took the idea of an open carnival krewe and ran with it. Bacchus changed the way New Orleans celebrated Mardi Gras, making its celebrations enormous, extravagant and more accessible to the general public. Bacchus also broke with tradition in its practice of coronating national and international celebrities as the krewe’s king. Over the years, Bacchus has offered this position of royalty to people like Danny Kaye, Bob Hope, Kirk Douglas, Larry King, James Gandolfini and others. Bacchus rolls Feb. 26 at 5:15 p.m. kreweofbacchus.org

Relax at: After the parades are over, you might just want to kick back and have a taco or a beer. Why not cruise over to Tacos & Beer? As the name so aptly implies, this causal eatery on the avenue offers authentic Mexican treats with your choice of meats, like carne asada, carnitas, chorizo, al pastor and even lengua (beef tongue). But the menu doesn’t stop there! You can score nachos, guacamole, queso, a ceviche tostada, a Big Ass burrito, mole enchiladas and flautas. Naturally, they also serve beer, and, along with Abita and Miller Lite, you’ll discover Tecate, Carta Blanca, Sol and Negra Modelo. Sipping some suds and crunching on tortilla chips can be the perfect recipe after a weekend of parading. 1622 St. Charles Ave., (504) 304-8722, tacosandbeer.org