Protect yourself from summertime mosquitoes. 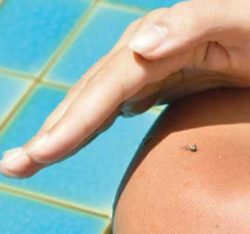 In the din of publicity surrounding Zika virus last summer, the state epidemiologist with the Louisiana Office of Public Heath says West Nile virus got lost in the shuffle.

That includes 1,000 cases of neuro-invasive diseases, 100 people with severe permanent disabilities and 100 deaths. While most of these cases fell among people 65 and older, Ratard says no age is entirely immune from a host of mosquito-borne diseases like Zika, Dengue, Chikungunya or West Nile, but protection is the best likelihood for prevention.
He shares the following mantra for going on the defensive: “Not on my skin; not in my house; not in my yard.”

You might also remember this as the 3D’s of protection: Drain; Dress; Defend.
Drain: The tiniest puddle of standing water can be enough for a mosquito to lay thousands of eggs.
Dispose of any tires, capable of breeding thousands of mosquitoes. If making a tire swing, drill multiple, large holes to allow adequate drainage and circulation.

Drill holes in the bottom of recycling containers and remove all bottles, barrels, buckets and garbage can lids from the yard.

Flip canoes, toys and other receptacles to prevent pooling water.

Dress:
Wear light colored, loose fitting clothing.
When practical, wear long sleeves and long pants.
Studies have shown that some of the 174 mosquito species in the United States are more attracted to dark clothing and bite easily through tight-fitting clothing.

Defend:
Use mosquito screens on doors and windows.
Stay indoors at dusk when most mosquitoes swarm.
If you’re headed outside, choose a mosquito repellent that has been registered by the EPA.

Approved and recommended repellants include:

–Natural repellants like citronella oil, lemongrass oil or geraniol (a geranium derivative) are alternatives for people worried about stronger chemicals, but according to Consumer Reports, most products are not effective in long-lasting repellant.
–If using sunscreen, apply it first, then apply bug spray.
–After the bite, if you don’t have calamine lotion or anti-bite gel, then hand sanitizer, witch hazel or a wet green tea bag can help fight the itch. Any of the above kept cold improve the soothing qualities.

A “Mosquito” By Any Other Name
The Spanish called the mosquitoes “musketas,” and the native Hispanic Americans called them “zancudos.” “Mosquito” is a Portuguese word meaning “little fly,” while “zancudos,” a Spanish word, means “long-legged.”

While male mosquitoes go about their business enjoying flower nectar, it’s the females who do all the blood sucking. The fierce itching you experience is not from the bite itself but from your body reacting to the enzymes in mosquito saliva. (In fact, mosquitoes don’t bite; they puncture and slurp.)

Mosquitoes are worse than annoying. They go beyond ruining your evening barbecue; and they can cause interference with work environment, and illness in animals and humans.

At the end of the day, however, Dr. Ratard says, Louisiana is fairly low-risk for mosquito diseases. While women in Miami panic about local mosquitoes testing positive for Zika, the few transmissions of Zika in Louisiana have come from people traveling outside of the country. A majority of mosquito diseases have fallen in number as sanitation, education and spray control has increased. “The last case of Dengue acquired in Louisiana was in 1945,” Dr. Ratard says. “Of course these diseases are continuously imported, but, so far, we have been lucky and have not had any local [in-state] transmission of Zika, Dengue or Chikungunya.”

Dr. Ratard says it’s impossible to make an accurate mosquito forecast, but the potential risk will be back with the return of warm weather.

Risk Factors
According to studies, there are several conditions that make you a more attractive meal to these tiny little blood suckers.
Consuming Alcohol It might have something to do with increased body temperature. And mosquitoes can break down alcohol before it reaches their blood streams.

Working Out – Body heat, lactic acid and releasing carbon dioxide all contribute to making you a tastier skeeter snack.

Being Pregnant – A study in The Lancet showed that expectant women are twice as likely to attract bites.

Having O-Type Blood – O-type blood can mean up to an 83 percent bite increase.

Being Male – Scientists suspect this is size- and heat-related.