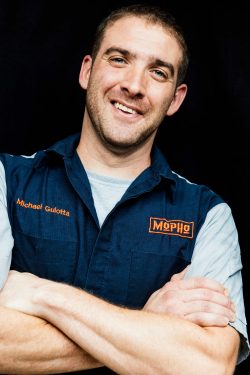 After his recent appearance on Food Network’s Iron Chef Gauntlet, you might assume chef and restaurateur Michael Gulotta is seeking the spotlight as one of the nation’s latest celebrity chefs, but the reality is quite different. “I’m more excited about my new restaurant than I am about Iron Chef,” he says, laughing. “It was fun to be there with chefs I’d never worked with before, but my whole intention was to put out good food.”

The native New Orleanian started his culinary journey working in the kitchen of Planet Hollywood. The movie-centric restaurant chain had a location on Decatur Street in the French Quarter before the levee failures in 2005. “I worked the line for about half a year before I started culinary school at Nicholls State,” Gulotta says. After studying at the Chef John Folse Culinary Institute and working at Folse’s restaurant Lafitte’s Landing in Donaldsonville, Gulotta returned to New Orleans and worked with esteemed Chef Pete Vasquez at Marisol and then moved on to cook his way through the ranks at John Besh’s Restaurant August.

Knowing he still had plenty to learn about cooking and cuisine, Gulotta left his home town to travel and work in places like the Italian Riviera under Chef Marco Ballo and in Germany under Chef Karl Josef Fuchs. Gulotta quickly returned home after the devastation of Hurricane Katrina left the city in shambles. He returned to work at Restaurant August and quickly rose to the position of chef de cuisine where he stayed for the next six years.

Flash-forward to today where only four years after leaving the indomitable Besh empire, Gulotta now has two restaurants, two kitchen installments at local bars and an ever-enduring passion for making great food. In three short years, MoPho, his flagship restaurant specializing in a unique blend of Vietnamese and Louisiana cuisine, has become a regular dining spot for the lucky denizens of Mid-City. “I love MoPho and I love what MoPho is … it’s become this great neighborhood joint,” Gulotta says. “I’m really thankful to have such an awesome team who run the day-to-day and really love working there.” Gulotta also creates and manages the menus at Rum & the Lash, an American food installation running out of the popular Irish pub Finn McCool’s and Tana, Italian-inspired cuisine at the ritzy Tulane Avenue bar Tréo.

At the end of last year, Gulotta launched his latest creation Maypop inside the Paramount building in the uber-hip area dubbed the South Market District. Taking over the space that briefly housed Ursa Major, Maypop is the culmination of Gulotta’s 20-year cooking experience and a place where fresh produce, meats and fish are the inspiration, and the cuisine is bound by nothing but the chef’s own creativity. “I don’t need any particular inspiration. I just have fun with the food!”

Though they keep a rein on the size of the menu with only 16 dishes (including four desserts), everything else is left to the whim of the chef and what’s locally available. “We change [the menu] whenever we want,” Gulotta says. “It’s all based around when we get things from our local farms. We preserve them or cure them, and, when it becomes ready, we’ll run a dish or dishes with those things, and, when they run out, we’ll switch to something new.” So far, the colorful palette-like menu has featured dishes like crispy P&J oysters with bourbon barrel soy mash aioli; pecan cavatappi with toasted coconut oil and king trumpet mushrooms; and wok-fried beef brisket in dry curry with kumquat, cashews and roasted cauliflower.

The horizon is filled with opportunities for the talented chef, including plans for a second MoPho restaurant inside the New Orleans airport terminal that’s set for completion in Oct. 2018. “We run MoPho like a little independent restaurant, and now we have to figure how to make it something that can be duplicated,” Gulotta says. “It’s exciting, because, if we can do that … if someone wants to open a MoPho somewhere else … we’ll have a formula to do it!” Another notable event in his near future is the New Orleans No Kid Hungry Dinner (nokidhungry.org) being held othis month at Compére Lapin. Along with chefs Nina Compton, Aaron Brooks and Mike Pirolo, Gulotta will be preparing a multi-course dinner in an effort to help end childhood hunger in America.

Right now though, this incredibly talented chef has only one thing on his mind — cooking at Maypop. “If I can get anyone excited about anything I’m doing, I want to get people excited about eating at Maypop,” Gulotta says. “That would be the best thing for me.” maypoprestaurant.com, mophonola.com