The Saints pick Marshon Lattimore to lead an impressive rookie class in to 2017. 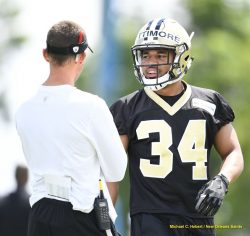 The New Orleans Saints emerged from the 2017 draft stronger than they entered, thanks to adding key selections in the offensive and defensive backfields, and both sides of the line of scrimmage. Restraining themselves from dramatic draft day trades, which have marked recent seasons, the Saints held their early first round pick and selected cornerback from the Ohio State Buckeyes, Marshon Lattimore, who had been oft discussed as the best player at his position.

Lattimore is a remarkable addition for a team beset by bad luck at cornerback in the last few years, and, which over its history, has arguably never had a true shutdown corner. He will almost certainly slide in opposite Delvin Breaux from the outset, and his ability to range the whole field effectively will be essential to a Saints defense, which has been sorely lacking in both edge and inside pass rushers. In 50 prior drafts, the Saints had used a first rounder on only three other cornerbacks, including Patrick Robinson, Malcolm Jenkins (also from Ohio State) and Alex Molden. While Robinson turned in some workmanlike seasons, Molden was a notorious bust, leaving Jenkins as likely the only Saints cornerback ever selected in the first round to turn into a defensive mainstay. Indeed, while head coach Sean Payton is known for his passing offense acumen, he is obviously respectful of the need to stop other teams’ passing games, as he has selected three cornerbacks in the first round in his 10 seasons.

Ultimately, as a team in the same division that brings Julio Jones and Mike Evans as lead wide receivers on rival squads, the Saints did not overthink their situation. They could not ignore Lattimore, the best cornerback in the draft. Lattimore possesses a mixture of speed, athleticism and ball skills, which the Saints have been sorely lacking on the defensive side for some time. Starting for the National Championship Buckeyes, both a physical tackler and capable of switching between press and zone, Lattimore was one of the best college coverage cornerbacks in a long time. He demonstrated speed, instinct, reach and leaping capability, allowing him to defend the best wide receivers in the Big Ten — if not the country.

As a rare talent, he should make the Saints and their fans very happy — all while immediately relieving huge concerns for Saints defensive coordinator Dennis Allen, who is faced with rebuilding a defense that has needed athletic help in the worst way for several years now. A natural on-field disrupter, Lattimore is physically extraordinary (4.36 40-yard time and 11-foot broad jump), has unlimited potential and has the ability to be a genuine star in the NFL. While Lattimore accomplished a great deal at Ohio State in his final season, including first team All-Conference honors, perhaps what is most notable is what did not happen: He never missed a single tackle, and he surrendered a mere 30.2 quarterback rating in passes thrown against him. In 50 seasons, the Saints have had only two cornerbacks make the Pro Bowl: Dave Waymer in 1987 and Eric Allen in 1995. That is a considerable record of futility, but it appears that is about to change.

The Saints obtained further help in the defensive backfield by drafting safety Marcus Williams of the Utah Utes in the second round. Williams was prolific in his three-year college career, not only piling up 11 interceptions and seven more forced or recovered fumbles in 30 starts, but also generating a reputation as one of the nation’s best tacklers at his position. Williams, who also turned heads at the NFL combine, may very well share time with Kenny Vaccaro and Vonn Bell as the Saints’ premier safety tandem, meaning, that along with Lattimore’s presence, the pass defense will look very different, and far more athletic, than in years’ past.

The Saints matched these two high-defensive draft picks with corresponding premium offensive picks, including offensive tackle Ryan Ramczyk of Wisconsin in the first round and running back Alvin Kamara of Tennessee in the third round. At tackle, whether the need is to fill in as a backup for the occasionally injury-prone Terron Armstead or to eventually take over from 34-year old Zach Strief, Ramczyk (at 6-foot-6-inches and 314 pounds) promises to be a major presence on the Saints’ front line for years to come.

Ramczyk was a consensus first-team All-American, while leading an offensive line in a program that is rich in tradition, as the Wisconsin Badgers have produced such stars as Joe Thomas and Travis Frederick in recent years. Kamara’s selection was a surprise, considering the Saints were already very deep at running back: Mark Ingram, Adrian Peterson and Travaris Cadet have packed in a lot of production and versatility over the years, but the loss of Brandin Cooks this offseason likely means there will be a wealth of touches still to be divided, especially in the backfield and near the line of scrimmage (a function that the Saints’ West Coast offense is very much reliant upon). While Kamara was a productive runner for the Volunteers in two seasons (210 rushes for 1,294 yards and 16 touchdowns) it may be his receiving prowess (74 receptions, including 19 games with multiple receptions) that most attracted the Saints.

The team may likely be reverting to its strategy of frequently targeting its running backs — something that was once a regular feature with Reggie Bush (88 receptions as a rookie in 2006) and Darren Sproles (86 receptions in 2011). Altogether, it appears the Saints may have rapidly reshaped the look of its defense and offense in four picks early in the 2017 draft.