Explore the delicious gastronomic diversity that New Orleans has to offer. 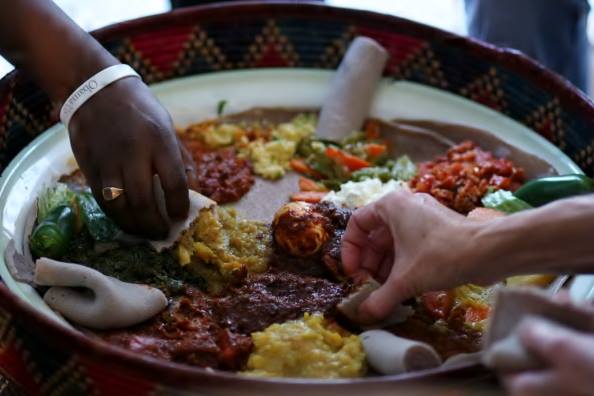 Lunch at: Get a “hands on” experience dining at Cafe Abyssinia, an Ethiopian restaurant on Magazine Street. Tucked behind a shoe repair shop and a sno-ball stand, this unique eatery offers finger-licking good dishes with everything from charbroiled short ribs with jalapeños and spicy doro wat to red lentil stew, all of which is served upon a huge, spongy piece of tangy injera bread. While scooping up delicious bites using your hands and torn pieces of injera, you’ll feel as though you’ve left New Orleans (and your mother’s admonishments about eating with your hands) far, far behind. 3511 Magazine St., (504) 894-6238, cafeabyssinianola.com

Catch a foreign flick at: Among other things, Zeitgeist Multi-Disciplinary Arts Center on Oretha Castle Haley Boulevard offers daily screenings of foreign and independent films. Expand your horizons with movies like Have a Nice Day by director Jian Liu concerning a city in southern China and a bag containing a million yuan or Werewolf, a Canadian drama directed by Ashley McKenzie about a couple of drug addicts living in Nova Scotia. If you discover a taste for indy films, you might just want to sign up for a membership. Get discounts on admission and support the center, while you’re at it. 1618 Oretha Castle Haley Blvd., (504) 352-1150, zeitgeistnola.org

Sip at: A light-colored brandy produced in Peru and Chile, pisco was originally developed by Spanish settlers in the 16th century as an alternative to orujo or pomace brandy. In an effort to share Peruvian culture with the visitors and denizens of New Orleans, the Catahoula Hotel offers a gorgeous space with traces of the tropics so we can belly up to the wooden bar and get a taste of Peru without ever leaving the states. Savor the new world with a well-crafted Pisco Punch made with pisco-marinated pineapple and fresh lime or the Cognac Blessed with pisco bitters and satsuma. 914 Union St., (504) 603-2442, piscobarnola.com

Revive at: Pretend you’re patronizing a rustic cafe in Italy at Piccola Gelateria. Though its known for artisan gelato, this sweet spot on Freret Street offers a whole lot more. Italian flatbread wraps or crepes stuffed with maple-smoked ham and stracchino cheese or heirloom tomato and burrata are well worth a visit. You may even want to request a scoop of pistachio or hazelnut gelato in your espresso — you know, just a little lagniappe. 4525 Freret St., (504) 493-5999, piccolagelateria.com

Experience global folk music at: Venezuelan-born, Spanish conductor José Luis Gomez conducts the Louisiana Philharmonic Orchestra in a concert featuring pieces that incorporate traditional and folk melodies from around the world at the Orpehum Theater this month. Discover Carreño’s Margariteña, which features famous popular Venezuelan tunes fueled by traditional rhythms, followed by 16-time Grammy Award-winning banjoist, Béla Fleck, who will premiere his Banjo Concerto, newly commissioned by the LPO in celebration of the New Orleans Tricentennial. The concert concludes with Ottorino Respighi’s Pines of Rome, which recalls memories of children’s songs and hymns in Roman life. 129 Roosevelt Way, (504) 274-4870, orpheumnola.com

Dine at: Owned and operated by Doug Crowell, formerly of Herbsaint Restaurant, Bao & Noodle is a foray into Chinese cuisine that reminds us of our lack. Located in Bywater on the corner of Chartres and Port streets, this low-key restaurant looks much like the corner grocery store that used to inhabit the space. Folky local art adorns the walls and black cafeteria chairs surround small tables. The food is the real star of the show with everything from tasty scallion pancakes and excellent fried steamed bao to cumin braised lamb with Biang Biang noodles. 2700 Chartres St., (504) 272-0004, baoandnoodle.com

Relax at: Similar to the thick, tortilla-like corn arepas from Venezuela, pupusas are the Salvadoran equivalent that can be found and enjoyed most heartily right here in the Riverbend at La Macarena Pupuseria & Latin Cafe. Owned and operated by the Ochoa family, this restaurant is a go-to for dishes like shrimp ceviche, chicken flautas, ropa vieja and, of course, pupusas. Other delectable items worth mentioning (and worth trying) include the killer homemade refried black beans, fried sweet plantains and tres leches cake. 8120 Hampson St., (504) 862-5252