Some cities have brass bands, commonly known as military bands or concert wind ensembles, but few have brass bands with the flavor and exuberance of New Orleans brass bands. With a little jazz, a little funk and a whole lotta soul, their music makes you want to let your hair down and boogie, forget the cares of the day and laissez les bon temps roulez. New Orleans wouldn’t be the same without the tuba-thumping, percussive jaunt and free-style chant of a second line procession. It’s another way to get our brass band fix, along with Mardi Gras parades, jazz funerals and late nights at the Maple Leaf.

The Beginning
Brass bands became popular all over the United States in the early 19th century. Before jazz, bands were composed of classically trained musicians who performed complex scores for concerts, dances, parades and political rallies. In the1920s, musicians were influenced by the syncopation and improvisation of jazz. The city was a cultural melting pot, made up of Europeans and Africans of various descent, including West Africans who arrived via the Caribbean and brought with them West Indian culture. Drumming, dancing and chanting were regular events in Congo Square. New Orleans brass bands flourished under these influences, alongside black social aid and pleasure clubs that provided assistance with health care, funeral expenses and financial hardships to dues-paying members. Parties and dances were a big part of the clubs and offered a sense of unity within the community.

Jazz funerals—to which brass bands became inextricably linked—were the social clubs’ approach to funeral processions and parades. The “second line,” a descendant of the jazz funeral, originally referred to people who were not part of the procession’s “first line” of grievers. The second line folks were attracted by the lively music and joined in on the parade. 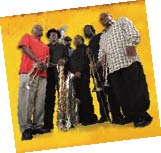 Brass bands played a role in New Orleans even as musical styles shifted during the 1950s and 1960s. Famous long-standing groups included the Eureka Brass Band and Olympia Brass Band. The following two decades saw a resurgence in the genre led by a man named Danny Barker who taught young musicians the traditional music. These musicians blended elements of pop, funk and bebop, and many of them showcased the sound in a new project: the Dirty Dozen Brass Band.

DDBB founding member Roger Lewis (baritone and soprano sax) started out playing guitar in rhythm-and-blues and rock ’n’ roll bands. “I always wanted to play in a band with nothing but horns, drum and tuba,” says Lewis. “Horns can do everything that the guitar and piano does.” In the early days, DDBB played a little club Uptown, on Third and Saratoga, called the Glass House. “It was famous, everybody came through —Dizzy Gillespie, Fats Domino—to hear the Dirty Dozen.” The place wasn’t much bigger than a living room, but on Monday nights you got a free plate of red beans and rice, the drinks were cold and the music was hot. “We weren’t trying to change the traditional music, says Lewis, “we were just playing music that we wanted to play.” But no one else around was playing Thelonious Monk and Michael Jackson brass-band style. DDBB produced classic originals like “My Feet Can’t Fail Me Now” and “Lickety Split.” Says Lewis, “We play with our mind, body and soul.”

Rebirth Brass Band followed on the heels of DDBB. It was formed in 1983 by brothers Phillip and Keith Frazier and trumpeter Kermit Ruffins, all of whom had played together in Joseph S. Clark High School’s marching band. In the beginning, the young group took their show to French Quarter streets and played for tips, as well as playing functions important to the brass band tradition. Ruffins left the band in 1992 to form his own traditional jazz band, the Barbecue Swingers. Today Rebirth, which celebrated its 25th anniversary last year, has garnered a loyal fan base throughout and beyond the city, in large part because of their 18-year-stint rockin’ the house on Tuesday nights at the Maple Leaf Bar, Uptown.

In the early 1990s, the Soul Rebels erupted on the scene ushering in a new wave of brass band music that layered hip-hop, rap and new-school R&B. “Soul Rebels was an off-shoot of the Young Olympia Brass Band, which was a junior band to the famed Olympia Brass Band,” says Lumar LeBlanc, founding member, leader and trombone player. “We were playing the traditional New Orleans jazz that Olympia taught us, but we also wanted to [play music] that was more exemplary of who we were.” Early on, naysayers touted the wildly energetic Soul Rebels as a fad, but today the demand for their music is stronger than ever. According to LeBlanc, their “hip-hop-funk-til-ya-drop-jazz” is what people want to hear. And local DJs love playing alongside them. “DJs like DJ Real like us because we’re able to incorporate the beat and their mix [into our performance].”

Many brass bands play regularly around town, from those that honor the old jazz and Dixieland tradition, like the

Storyville Stompers and the Treme Brass Band, to new bands who have created their own styles, like the Hot 8 Brass Band. The popularity of the music extends beyond the borders of the city, not just because homespun bands tour extensively, but because other states and countries have produced bands that honor New Orleans music. Japan’s Black Bottom Brass Band visits the city every year, as does Oregon’s Youngblood Brass Band; and festivals honoring the genre have cropped up as far away as Kentucky, Spain and the UK.

155
previous All Hail Republic
next Strutting Their Stuff