From cupcakes to cochon de lait, there’s no shortage of enticing indulgences to try

A new year and another clutch of resolutions to make, and promptly break. It’s all the fault of the chefs, restaurants, bartenders and brew masters.

How can I vow to lose weight or get in shape when I’m keeping up with all the culinary talent in town, tasting all the new dishes, discovering the latest food finds, peeking into the newest restaurants and washing it all down with creative cocktails from savvy bartenders at slick new lounges? This job is worth every bite, sip and calorie. One resolution I can make: to be more grateful. Sincerely, is there anything better than to be a food and drink writer in the magical, divine city of New Orleans? I don’t think so.

Mid-December saw a number of long-awaited restaurant openings. Scott Boswell’s Stanley is finally open and serving. The menu shows almost no changes from its original incarnation except a steep, steep rise in prices—for me, a big disappointment. Seriously, Boswell is major-league talent, but an $18 Korean beef and kimchee po-boy with no sides? Yikes.

Bart Bell is one of the most hilarious chefs, and he’s talented to boot. While we’ve all waited and waited and waited for Crescent Pie & Sausage to open (the hurricanes blew that back a few months), Bad Bart and his culinary co-hort Jeff Baron have cooked at Bacchanal and even had a booth at Po-Boy Fest, dishing up a po-boy stuffed with fat, juicy chicken sausages topped by an earthy, creamy mushroom and onion ragout. Now comes Huevos on Banks Street, an eggish expedition, including a fabulous huevos con tamales (two

Stop by Chill Out Cafe (Maple at Burdette) for some fresh, aromatic and perfectly lovely Thai dishes. Breakfast is also on tap in the mornings, but it’s the lunch dishes that have me all atwitter (and I mean that literally—see LorinGaudin “tweets” on Twitter.com). Also open in 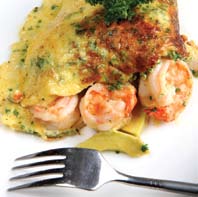 the University-Riverbend-Carrollton area is Pupuseria La Macarena, where the riff on fried yucca will make you weak in the knees. And then there’s Q-Crawler Nathaniel Zimet’s newest project, Boucherie on Jeanette, off Carrollton, in the former Iris space. If you haven’t yet had Nathaniel’s grit fries and cochon de lait, run—don’t walk—and keep eyes peeled for steamed mussels with collard greens, housemade sausages, fresh pasta. All prices are kept below $15.

If it hasn’t opened by the time you read this, give it a week or so. Neal Bodenheimer’s new cocktail lounge, Cure, promises to take us back to a time when “ … having a cocktail and a bite to eat was both healthful and enjoyable.” Neal is quite the talented barman and his eclectic mix of coffeehouse, juice bar and lunch café by day, bar and restaurant by night, with careful crafting of both cocktails and cuisine, should be a smash hit. Kudos to Cure for being a part of the revitalization efforts on the beloved stretch of Freret Street between Napoleon and Jefferson.

NOLA Brewing (www.nolabrewing.com) should be up and hopping now as well. Kirk Coco and Peter Caddoo have created their first two brews: a blonde and a brown ale. You’ll likely find NOLA Blonde and NOLA Brown in your favorite bars and restaurants this month. Be sure to roll by their facility on Tchoupitoulas Street; it’s pretty amazing.

If you crave a classic cocktail in a contemporary environment, check out Chris McMillian, über bartender, helming the digs at Bar UnCommon, in the Renaissance Pere Marquette. Chris’ cocktails are legendary, balanced and well crafted; the man knows more about bar and drink history than anyone I know. He’s a mighty storyteller with great knowledge and a beautiful booming voice. Sit a spell with Chris and you’ll find that the cocktails go down with surprising ease.

While driving around town, I spied a restaurant called City Diner that is “coming soon” near the Galleria; my pal Todd Price noticed Creole South restaurant on Carrollton across from Chinese Kitchen; and around the corner from there on Earhart is a new soul food joint. Meanwhile, back Uptown … what’s this about the former Table One/Takumi space being converted to yet another restaurant? Details are sketchy but involve some of the kitchen crew from Restaurant August. Stay tuned.

Some food news of the strange and exciting variety:

—Say au revoir to Dominique Macquet who was mysteriously ousted from his self-named restaurant at the Maison Dupuy.

—In my quest for “health,” I tried NAKEDbagels, the baked brainchild of NAKEDpizza (formerly known as the World’s Healthiest Pizza), being sold at PJ’s coffee shops. Just like the pizza crust, NAKEDbagels are chewy, a little sweet and fiber-rific.

—The restaurant Raw (aka “Kajagoogoo” for the ’80s throwback facade) has now become Aja (yes, pronounced “Asia” as in Steely Dan). The menu is unchanged from the previous incarnation, but there are new owners and crew.

—Congrats to chef Aaron Burgau (of Patois fame) and his wife, Kim, as they expect the birth of another little boy in April.

I can’t resist mentioning that deli diva Dan Stein is trying to achieve “serenity now” by taking yoga classes. Wait, or is it that Stein is trying to date “a hot girl” who happens to take yoga? Pop into Stein’s deli and ask the sandwich sage himself.

208
previous Tea Party
next One in a Million