To raise or not to raise?

A vexing question for homeowners in post-Katrina New Orleans 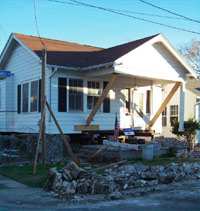 I still remember the overwhelming, musty stench that raced out of the house when I pried open the waterswollen back door. It was October 2005 and I was about to see for the first time what the flood did to my house in Broadmoor.

The first room confirmed the worst. The kitchen was covered in a gray film. Pots and pans were strewn across the slippery mud-covered slate tile floor. Newspaper recycling had floated down onto the wood floors in the hallway, forming a dark, sticky papier-mâché carpet that crept into the living room. The dining room chairs were upside down, and a loveseat, green with mold, rested on its side near overturned houseplants.

Now, almost 14 months later, the postmortem stats roll off the tongue pretty easy. Five feet of water in the street. Two in the house. Two weeks to recede. A month before allowed inside. Mold at four feet. Everything lost.

Like many who flooded, I’m still not back home. It’s not because I’m on the fence about staying in New Orleans. I’m committed and am fortunate enough to have resources to rebuild. What’s killing me is deciding how. The central question is whether I’ll ever feel secure repairing if I don’t elevate the house above the flood line. It’s a crippling dilemma because no repairs can begin if you are going to raise a foundation. Walls will crack, pipes can shift and doors frames will move.

But raising a house is expensive, costing between $40,000 and $65,000 for a pier house and $60,000 to $80,000 for a slab home. I can’t afford to elevate if I don’t get a mitigation grant, but there is little clarity on how much the government is giving flood victims for mitigation. I’m still waiting to find out if I qualify for a Road Home grant.

There is a huge pool of mitigation money for those in flood zones whose homes are severely damaged. The National Flood Insurance Increased Cost of Compliance program can give up to $30,000 in some cases to raise if a house is more than 50 percent damaged and below FEMA’s base flood elevation. The BFE is a benchmark for water in a 100-year flood. The Louisiana Road Home program promises another $30,000 for home elevation to those eligible, but so far the program has given out only a handful of grants and eligibility is sketchy.

Few in my neighborhood are raising homes. Most raced to get building permits early so they could repair without elevating. Many don’t want to shell out the money if they don’t have to raise. They are unwilling to delay repairs by months to wait for grant money that may never come. Others are digging into their own pockets to come up with the money.

Neighbor Sandy Tenaglia raised her home eight feet this fall, creating a parking garage below her ground floor. Her small one-story wood frame house now towers over her FEMA trailer. She doesn’t understand how anyone can rebuild without elevating. “I guess they can live with that fear that they are going to lose everything,” she says. “I lost everything that wasn’t in the attic. I don’t ever want to go through that again.”

She spent approximately $60,000 on the work. At least half of the cost is covered by a mitigation grant. If the rest doesn’t come from the Road Home, she’ll have to tap into savings. “People have talked to me and asked, ‘Are you going to recover [the expense]?’ ” she says. “It really doesn’t enter into my thinking because I’m hoping to just grow old and have this be the last house that I live in … All I know is that once they elevated, I stopped caring about which storms were forming in the Gulf. I had enormous piece of mind.”

Tenaglia isn’t alone in her thinking. Owners of home elevation companies say people have been using their own money along with grants to pay to raise above flood lines. Warren Davie, owner of Davie Shoring Inc. says business is booming. The company, which normally raises 50 homes per year, has elevated more than 300 since Katrina, he says.

Davie and others in the industry are expecting a surge next year when Road Home checks begin to flow to homeowners.

“I don’t think you can wrap your mind around how big it’s going to be,” says Greg Abry, owner of Abry Bros. Inc. “I have a bunch of people who are waiting for Road Home money to do the job.”

Roughly $1.17 billion of the Road Home grant pool is dedicated to mitigation. While raising a home may give some piece of mind, it’s still unclear how it will affect the value of a home in flooded neighborhoods, say real-estate agents.

If a homeowner spends $50,000 on a kitchen renovation, she can expect to get a large percentage of that back in resale value. If that same $50,000 is used to elevate, it may not make any difference in resale. There isn’t enough sales data for such homes to predict a trend, says Daryl Glade, Realtor for Re/Max New Orleans.

“It’s an interesting question,” he says. “We have no proof now stating that you will get that money back.”

Elevating will lower flood insurance premiums, which could make a home more attractive, but it doesn’t necessarily make a home flood-proof. Road Home and other grants will only pay to elevate a house above base flood elevation, not above Katrina flood levels. That means that many homes could still be vulnerable if the levees fail again.

But that brings up an interesting dilemma. What happens if you’re one of the few who pay to elevate above the flood line and there’s another Katrina? Your neighbors flood and get insurance buyouts. You’re fine but now stuck with a mortgage for a house that may be a lone structure in a worthless neighborhood. It’s not an attractive scenario.

One thing I’ve learned from Katrina is that you can easily drive yourself crazy worrying about all the “what ifs” and risks regarding life in New Orleans. At some point you have to make a decision and not look back. I’m probably going to raise my house as high as I can afford, using a combination of grants and loans. Like my neighbor, I want to get to a point where I don’t care what’s going on in the Gulf next summer.

3.52K
previous Stress-free Holidays
next A Salute to Philanthropy