The Zulu Social Aid & Pleasure Club is calling out the big guns to celebrate its 100th anniversary of parading this year.

O’Brien endeared herself to many New Orleanians with her extensive coverage of the city following Hurricane Katrina, including a hard-hitting interview with former FEMA chief Michael Brown. She’s continued to follow the recovery in New Orleans with in-depth reports such as Children of the Storm, about the city’s youngest residents post-Katrina, and One Crime at a Time, about the city’s criminal justice system.

O’Brien, who has experienced Mardi Gras as a reporter and never purely as a spectator, says she is excited to get a chance to be a part of the festivities.

“I’m so thrilled that they asked me to be a part of it. I love the city of New Orleans, but I hadn’t spent much time there before Katrina,” she says. “I sort of camped out there during Katrina, and have come back a lot after, so to me, to be asked to be part of [Zulu] on a very important float during a very important anniversary is an incredible vote of confidence in a way, if I can be so bold, in my work and commitment to the city. I am honored.”

Local attorney Stephen Rue, who is this year’s Mr. Big Stuff, called O’Brien last year to see if she would be interested. She immediately called her girlfriends from New Orleans, including Today show anchor Hoda Kotbe and former CNN producer Kim Bondy, to see what it meant to be a Big Stuff.

O’Brien is still waiting to find out the full extent of her Big Stuff duties. She sent over her measurements to be fitted for her parade gown. One minor gaffe so far. “Everyone was very disappointed that the measurements didn’t include my head. I had forgotten about the headdress part.”
She has also been schooled on the whole tradition of decorating and handing out coconuts. “I’m told it’s the absolutely best throw you can get,” she says. “I love that the Louisiana Legislature cleared the path legally [for throwing them]. Only in Louisiana, I might add.”

O’Brien may have some help passing out those coconuts from fellow luminaries from CNN. She has asked her former American Morning co-host Miles O’Brien to join her on the Big Stuff float as well as Anderson Cooper, another journalist who made a name for himself covering New Orleans and Hurricane Katrina.

Speaking of Anderson, is he jealous that she got to be Carnival royalty before he did?

O’Brien chuckles, saying Cooper is in no danger of being upstaged. “I don’t think he’s worried at all. I think he looks at it like we will divide and conquer and share the love.”

Her other co-workers at CNN have all instructed her to take plenty of pictures of the experience to share with them once she gets back. She also plans to take some time to experience the city as a tourist as her schedule permits.

So what is her impression of the city more than three and a half years into the recovery? 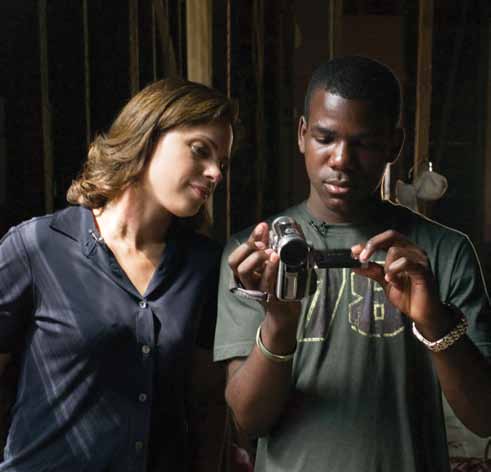 Some parts like the downtown look great. The hotels look great—the W, the Ritz, the Loews—they look wonderful, which is fantastic. But there are certain neighborhoods where things look bad. Really bad. And three and a half years is a really long time to wait for basic services to come back to neighborhoods,” she says. “So its kind of a really mixed bag. We did a documentary on the crime issue and you get the sense that the people who are devoting their lives to try and fix it are incredibly heroic. But it’s a huge giant challenge and you can’t“My girlfriends and friends there will say that sometimes they are having Katrina days and I’m hearing that less. sugarcoat it.”
The recovery may have faded from the national headlines, but O’Brien thinks that the story of New Orleans will endure.

“I think that Katrina has a very emotional spot in the hearts and minds of most American viewers,” she says. “I give speeches all the time and one of the first or second questions is, ‘Have you been back to New Orleans? What’s it like? What’s really happening there?’ People are very, very interested in the well-being of the citizens of New Orleans. So the story isn’t going away.”

When O’Brien dons her headdress and regalia this Mardi Gras, she’ll get to see firsthand how the city continues to celebrate its traditions and rebirth. She says she can’t wait to be part of the celebration. “And I will do my best not to womp anyone on the head with a coconut.”

307
previous Brewing Up Success
next The St. Joe Stroll