When One Door Closes …

A rash of new restaurant openings in time for Mardi Gras

Intense, passionate, sentimental … all emotions fit for February and the major holidays: Valentine’s Day and the biggie, Carnival.

While I appreciate the sweet nature of Valentine’s Day, it’s Mardi Gras that gets me excited from a food perspective. My neighborhood group meets and sets a dining-cooking-cocktail schedule that includes a different feast and drink for every major parade. We’ve done whole prime ribs, wild game on the grill, frozen margaritas (using a gas-powered blender), old-fashioneds and more. And the best part is the number of local chefs who stop buy for a bite, a sip and a secret (or two). “It’s Carnival time and everybody’s having fun!”

Where to begin … Well, the openings keep coming and, in some cases, that means a closing. Metairie’s Shanghai Restaurant was rocking everyone’s world with classic and true Chinese dishes (from the “authentic” menu) when suddenly it was gone. In its place, Pho Orchid opened. The very contemporary, almost dance-clubby interior is left intact, including a snazzy cocktail bar, but there is also now a refrigerated case packed with fresh fruit for making bubble tea. The main dining area is spacious and the menu is filled with Vietnamese cuisine standards. This place aims to be Metairie’s Nine Roses and for those who care, the pho (beef soup) is gorgeously aromatic with cinnamon and star anise. Get rare beef slices plated on the side rather than already in the bowl—that’s how it’s traditionally done—to swish through the broth.

Another closing/opening is in the Takumi (Table One) space that has become Coquette. The interior is pretty much the same, toned down a shade, but the food, ah the food! From the kitchen of Restaurant August comes chef-owner Michael Stoltzfus and his charming neighborhood bistro serving lunch and dinner Tuesday through Saturday. The focus is on seasonality and value.

And yet another in the closed and reopened department: The space that was Sal & Sam’s, then Ardoise, then nothing for a time, has recently opened as Mike’s American Grill (4300 Veterans Blvd., 885-5566), a smart grill concept featuring lightish fare with an emphasis on aged prime steaks and fresh seafood. Chef Michael Uddo helms the kitchen (he was the chef at the long-gone but not forgotten G&E Courtyard Grill in the French Quarter). Mike’s does daily specials, mains, salads, a ginormous burger and cool cocktails (three for one martinis?!?). Brunch is served Saturday and Sunday, lunch and dinner daily from 11 a.m.

Get some in the morning! Oh, I know what you’re thinking, but this is about breakfast and newly opened Huevos (4408 Banks St., 482-6264), which I mentioned last month. It is kicking morning butt with well-crafted fresh, clean morning flavors dashed with a bit of the unexpected. Local baked goods from Binder’s, coffee from Bywater’s own Try-Me Coffee Mills (www.trymemills.com), mismatched china (including intriguing mustache mugs—a mug that keeps the mustache out of the coffee) and absolutely brilliant food. Chef Bart makes chocolates too, including the stunning Chili Mole Truffle. 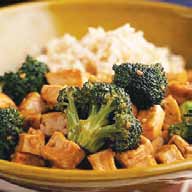 Finally, there is a new restaurant opening in the Marigny. Cafe Bamboo at the Dragon’s Den (435 Esplanade Ave., 940-5546) is the city’s only completely vegetarian restaurant. The menu is a bit disturbing, as it’s written with loads of meaty references (Soul Chicken, Collard Green Rolls with “ham chunks”), but it’s a ruse, because “all references to meat are in name only.” What is that about? Intriguing dishes include the rice bowls (tofu over brown or jasmine rice), sauced either Creole, Thai curry or mafe (West African spicy peanut sauce with tomatoes, cabbage and onions). Dinner and late-night only … for now.

Chef Shifting
Dan Esses has departed the kitchen at Marigny Brasserie, replaced by Miles Prescott (formerly of the Country Club and Delachaise). The talented but tortured chef Esses will undoubtedly turn up in another location, and when he does, we’ll let you know. For now, Esses is assisting Nathaniel Zimet at Boucherie on Jeanette.

As you read this, chef Randy Lewis is but a memory at La Provence. Lots of shake-up in the Besh camp: discord in the kitchens, not-so-hot buzz on the food at Lüke and even a rumor of yet another restaurant to add to the mix (that would be number six)—this time in Baton Rouge? All this fracas makes us wonder just what is going on? Could the restaurant empire be growing too quickly and getting out of hand? Methinks it might be time for some hunkering down, focus and stability before plowing forward with more eateries, concepts and concoctions.

Sweet Treats
Flowers and chocolates are so cliché on Valentine’s Day, unless the two come as one … and they do. This year, Whole Foods Market has a lovely collection of sweets. Yves Thuriès, French chocolatier and Meilleur Ouvrier winner (that’s a serious award, folks), has concocted beautiful dark chocolate with candied rose and violet petals—the crunchy candied flowers are a perfect foil for the silky, creamy chocolate and don’t overwhelm with a soapy-flowery taste. The soft, gently floral flavor is like the sweep of fresh petals on skin. I also went ballistic for the Silvanil Vanila Gelee, which, brushed on grilled chicken reminded me of chef Greg Sonnier’s glorious vanilla chicken at the late Gabrielle Restaurant. For Nutella lovers, there is upscale, twice-as-hazelnutty Noisette-Cacao Chocolate Hazelnut Spread to eat by the spoonful, drop into recipes or use as a lusciously sexy body paint.

Can I possibly go without mentioning King Cakes? Not on your life. The rumors still

circulate about the Randazzo family brouhaha, but the delicious King Cakes are nonetheless being made and sold, by several branches of the family. Hi-Do Bakery is once again making incredibly rich, buttery brioche cakes, including the one shaped like a crab. And who can resist a classic like Antoine’s Queen Cake, topped with all five of their flavors. Celebrating its 50th anniversary this year, Haydel’s issued new porcelain favors: purple, green or gold “bead dogs.” Over at Bee Sweet, Zoey Devall has baked up a delectable Endymi-YUM Cupcake with all the flavor of tradition in one sweet cupcake—baby included! If you’re the kind of King Cake lover who looks for something different, call Paul’s Pastry in Picayune where you can get plain, rum, ambrosia, Reese’s or pizza King Cakes. Hell, yes!