Belle of the Ball

The Women’s Opera Guild Home is ready for its unveiling

Growing up in New Orleans, I learned to love opera early on. My parents took me to my first opera La Cenerentola (Cinderella) at age seven. I was hooked. The sets, costumes, music and grandeur were the stuff that set a little girl’s imagination spinning. Still does.

But for glittering operatic events, not much compared with visiting the Women’s Opera Guild Home, located at 2504 Prytania Street. Heaven was accompanying Mother to this opulent mansion with its double parlors, marble fireplaces, gleaming crystal, stained glass windows and magnificent carpets! Oh, the silver; oh, the china; oh, the flowers. I’d wear one of my best embroidered smocks; Mother would don a hat and apply two drops of Joy perfume behind her ears, before slipping on gloves.

The house, then as now, could be toured by appointment or booked for social events such as teas, meetings, dinners and wedding receptions. Mother was a volunteer who could weave wonderful stories about the 1858 house: “The original structure was Greek Revival while the later addition was Italianate. The architect was the prominent William A. Freret. It was furnished in 18th- and 19th-century European and American furniture, some Victorian, some Baroque, some a bit Gothic.”

While Mother explained the origins of the grand piano and told of the generous gift of the house and contents from one Mrs. Herman deBachelle Seebold to the Women’s Guild, I’d climb the staircase to the second floor “bride’s bedroom” with its large canopy bed, antique dressing table and Art Deco three-way standing mirror. Sometimes, I’d park myself in the pantry where tea in a dainty cup or fresh lemonade and cookies were often waiting–I thought just for me.

Later as a young adult, I would return dressed to attend wedding receptions, teas and meetings at the house. I would come to see it as opulent yet tasteful, commodious in size, grand in scale but never threatening.

In 2005, Katrina’s tornadoes lifted up and dropped a large section of the back of the house and imparted damages to the roof. And, as if a curtain had come down during an act at the end of the ball, the Guild Home fell silent. Amid plaster dust and with no electricity, membersphotographed, cataloged and packed for storage thousands of items in the house, which was at various times boarded up, covered with scaffolding and sadly dormant on her outside. I watched sadly from my home a mere block away.

Then slowly there was activity: Robert Cangelosi of Koch & Wilson came in as the architects; C. A. Coiron III signed on as contractor; and Charles Kunz donated his services as interior designer. Soon, plasterer J. Poree was on board. Gordon Binder arrived and removed all the stained glass windows, shipping them to the Midwest for cleaning and restoration while overseeing the work on 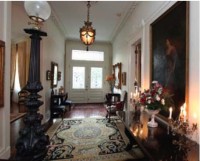 the house’s famed leaded glass front doors. Jim Immaculota began the arduous task of re-creating cornices and restoring gilt work on mirrors, chandeliers and the like. Robbie Cousins opted to restore the furniture on-site; Randy Chauvin took measurements for the curtains, fringe and sheers needed for the double-hung windows. Hico sent in a fleet ofpainters. All of this work was going on in a house with neither air-conditioning nor heat.

Recently, the Guild held its first reception and general meeting in the house since Katrina. And now the stately Davis-Seebold house, like La Traviata’s Violetta elegantly dressed for a ball, stands proudly ready for all to see.

477
previous Dickie Brennan’s Palace
next Everything Has Its Place