Once again, Napa Valley proved to be an enchanting destination for this wine lover 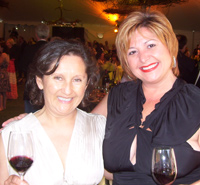 Napa Valley, the picturesque and palate-pleasing land o’ plenty that continually overflows with fine wine and gastronomic pleasures has never ceased to amaze me. And although I have had the good fortune to visit this hedonistic mecca many times in the past, I’ve never seen Napa Valley like I did on a recent trip. Yes, I expected glorious weather, serene views, fabulous food and top-notch wines, but what I also found was a town that has mastered the art of hosting a world-class and well-orchestrated four-day wine and food extravaganza.

On day one, we were invited to Flora Springs Winery to attend a lobster feed (their version of a crawfish boil, but with much larger crustaceans!). As we entered the modern tasting room and made our way to the counter, we were approached by one of their wine experts. He just happened to be an LSU graduate, so from our first sip we felt at home. Then, while sampling a few delightful wines, I spotted out of the corner of my eye two New Orleans natives and fellow wine fans whom I had not seen since the storm. Much to my surprise, they had become disenchanted with New Orleans and all of its post-K woes, packed their bags and moved to Napa. Wow, how I envied them!

After a brief, albeit cheerful reunion, it was time for the feed. About 40 guests scurried upstairs and watched with anticipation as caterers gently dumped onto the tables copious amounts of lobster, artichokes, shrimp, corn, potatoes, sausage and garlic. To accompany the boiled feast was drawn butter and, once again representing New Orleans, Tony Chachere’s and Tabasco sauce. As we expertly cracked open our lobsters (our tablemates from New York were quite impressed with our skills!) and sipped a delightful glass of Flora Springs Sauvignon Blanc, we knew at that point that this was sure to be a memorable visit.

After enjoying a few divine chocolates paired with a nice cabernet sauvignon, we hit the wine trail, stopping first at Charles Krug, followed by a small winery called Frank Family Vineyard, where we enjoyed several remarkable reds. We darted across the street to Larkmead, where we met a charming Scotsman named Colin, who happened to be the winery manager. While he was in the process of closing up for the day, he graciously offered to let us taste the wines and, boy, were we thrilled that he did! The wines were so incredible that we purchased a case of the syrah.

Although we had planned to head back up the hill to our abode to change for the evening, we passed a breathtaking yet unfamiliar winery called Alpha Omega. Naturally we were sucked into the vortex, so on went our tasting expedition. Upon entering the winery, you can tell that these guys were not shy about putting some money into the place. A large wraparound veranda overlooked a charming fountain and pond, and the spacious, wood-rich tasting room was warm and inviting. In addition to sampling the several well-made cabernet sauvignon and merlot wines, we were offered the chance to experience the 2007 cabernet out of barrel. It was so impressive that we bought a few bottles on futures.

We then headed to our evening function, a wine and food tasting, at an impressive art gallery/venue called Maisonry. There we enjoyed some tasty morsels prepared by several local chefs and sampled several exceptional wines from about six boutique wineries, including one owned by the Browns, a lovely African American family. While sampling the fantastic zinfandel and chatting about the wine business, David Brown, the winegrower at Brown Estate Vineyards, told me that African Americans own less than 10 wineries in California. Hmm, sounds like a story in the making!

As the event was coming to a close, we met the most adorable and entertaining couple, who coincidentally turned out to be the owners of Alpha Omega! Upon learning that Michelle was a Southern girl from Georgia, we instantly bonded and soon headed off to dinner with her and her partner, Alpha Omega co-owner Robin Baggett, and a couple of other folks. The only thing that outshined the food at Bistro Jeanty was the tremendous amount of laugher and camaraderie we shared with our newfound friends.

We set out early to attend the media breakfast at Robert Mondavi Winery, where we mixed with fellow journalists, winery owners (we met Mrs. Mondavi, which was a real treat!) and prepared our stomachs for a full day of tasting. Sprawled across the Mondavi grounds and filling two floors of the winery, A Taste of Napa, the grand tasting, showcased row after row of stunning Napa Valley wines and food from more than 60 top local restaurants, including the French Laundry and Mustards Grill. It was all simply mind-blowing! Several thousand wine and food enthusiasts eagerly made their way about the scenic setup, sipping wine at every turn. We kept hearing about the barrel tasting indoors, so we decided to see what it was all about. When we finally entered the barrel room, our mouths dropped open: Two full floors of premium wines were being served out of barrel, most by the winemakers themselves.

Some of the highlights were Palmaz (and its gregarious Argentinean owner), Cakebread, Stags’ Leap and many others. We eventually met up with our Alpha Omega buddies in the basement, where super high-end auction lots—for the big event on Saturday night—were displayed. Again, our plan was to head back before dinner that night, but we were easily persuaded to join Michelle and Robin at Alpha Omega to sip wine on the veranda.

Our next destination was “Midsummer Night’s Feast” at the elegant Conn Creek Vineyard, where we began with passed hors d’oeuvres (including a sublime miniature soft shell crab po’boy and a heavenly foie gras canapé) and sparkling wine. Once again, a local connection quickly surfaced as we discovered that the chef was originally from New Orleans (which explains the perfectly executed soft shell crab po’boy). The meal began with a succulent Alaskan halibut with baby fennel and grapefruit-scented spring onion gratin paired with Conn Creek Sauvignon Blanc. Next we enjoyed a stone fruit salad with blackberry and black pepper truffle vinaigrette and camembert. The entrée consisted of a tender and juicy grilled lamb loin T-bone with sweet corn risotto and wild mushrooms, which was ideally complemented by the 2005 Anthology. The feast finished with a to-die-for cherry bomb, a creamy, strudel-like dessert layered with creamy Franklin Teleme cheese and a tasty glass of 2007 cabernet.

Saturday morning began with a visit (unannounced but we talked our way in) to Palmaz. It is truly one of the most stunningly beautiful wineries I’ve ever seen and well worth a visit. After a brief detour to Andretti (yes, Mario Andretti’s winery, an impressive replica of an Italian villa with pretty sound wines), we headed to Signorello Vineyards for a casual poolside barbecue. But being Napa, this was hardly your ordinary backyard cookout. The pool was a gorgeous infinity pool complete with fountains, which overlooked the valley. The food was prepared in the state-of-the-art outdoor kitchen with wood-burning oven. We sipped a refreshing pinot noir–based rosé and dined on Angus Beef burgers, margarita pizza with fresh buffalo mozzarella, char-grilled asparagus, and the best darn hot dog I’ve ever tasted!

After lounging poolside and chatting with numerous interesting characters, we popped in next door to a winery named Darioush, the most extravagant palacelike winery I’ve ever seen, complete with exquisite waterfalls, both inside and out, gigantic columns, imported Egyptian stone counters and an underground tasting room. It is simply magnificent, and while the wines were pleasant, the place itself is well worth the visit.

We sped back to the house for a quick change before heading to the big gala—the dinner and live auction held at a spectacular resort called Meadowood. Again, our expectations were surpassed! Hordes of elegantly clad partygoers gathered on the lawn sipping bubbly, noshing on canapés, mixing and mingling. Then a drum-line-led parade erupted, with winery owners carrying large-format bottles of their best wine into the seating area. We fell into the “big bottle” procession and found ourselves under a gigantic outdoor tent lavishly adorned with vine chandeliers, grandiose place settings à la Martha Stewart, a big band and you guessed it, wine as far as the eye could see.

We were seated with two delightful winery owners, Amelia and Pedro Ceja, of Ceja Vineyards. Again, we hit the jackpot! Not only did this charming couple make fabulous wines, but they were truly gracious, bursting with joie de vivre and possessing an unbridled passion for grape growing and wine. The dinner featured courses created by six top Napa Valley chefs. We began with a tower of seared tuna with soya onions, avocado and yuzu granité, then from Charlie Trotter’s came a slow-roasted Tasmanian ocean trout with banana fingerling potatoes, Madras curry and braised veal tongue, followed by a maple-soaked beef tenderloin on jalapeño grits with greens and butternut squash with smoky chile aioli. The fourth course was a “minuet” panna cotta and tomato jam on olive toasts. The crescendo consisted of delectable roasted strawberries with lemon panna cotta and lavender.

Over the next several hours, extravagant, one-of-a-kind wine and lifestyle packages were presented during a live auction, most of which sold for $40,000 to $80,000! And while neither of us dared raise a paddle, we ended this extraordinary evening by sipping a 1960 Inglenook Cabernet with our Alpha Omega pals. So with that last sip of wine, our Napa Wine Auction adventure ended just as it had begun … beyond our wildest dreams.

The auction raised $5.7 million that will be distributed among several Napa Valley charities.

153
previous Love in a Bottle
next Finding Euphoria