Worth a Thousand Words … and More 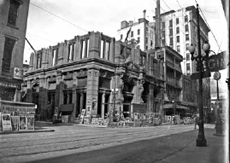 The year before his death, John Tibule Mendes (1888–1965), a packer for the Maison Blanche store on Canal Street, self-published his memoir. Dogs in My Life chronicled his life with his beloved mother until her death in 1948 and the pets he owned with her and then alone after her passing. Though the book was said to lack literary quality, a columnist described it as “intensely human” and “very moving.”

How did the book come about?

The pictures are part of the holdings of the Historic New Orleans Collection, but the project is really masterminded by Bill Lavender, the editor at UNO Press. He and [local publisher] G.K. Darby asked whether there were collections of photographs that presented themselves for collection in a book. Our reference staff steered him to the work of John Mendes. When they learned that Mendes had published his memoir, the editorial concept became to carefully examine his written work and sympathetically pair that with pictures he had made.

His photographs are very moving. How would you describe their artistic merit?

This came to us as a collection of negatives, so it’s hard to say whether Mendes himself would have developed the full negative, which UNO Press has done, or cropped them or taken the negative as so much raw material to work with. But if you look at the pictures he makes of groups of people, you’ll see that Mendes had an incredible eye. There is this inherent order in his pictures which remove them from the realm of simple snapshots. He had this innate sense of how a picture should be put together.

It’s interesting to see how much New Orleans has transformed over the years.

I think the photographs of Mardi Gras [in particular] are in so revealing. On one level they show how much people have changed in the way they present themselves publicly on Mardi Gras. On the other hand, there’s the continuity of being a day when people go out and don’t act the way they would the other 364 days of the year.

All the men wore hats and suits on Mardi Gras!

If you were not a masker, you were dressed for business. It does set up a dissonant quality that you see in the photographs. There’s one photograph of a guy in a baby doll outfit and a mask, and all the people around him are in suits. You look at that, you know exactly where it’s made in terms of the streetcar and the architecture, but there’s also this surreal element of this man balancing on one foot while wearing a baby doll nightgown, a mask and a wig.

How does the exhibition differ from the book?

It is smaller, with 43 photographs. And not everything that we put in the exhibition appears in the book. We wanted to keep them slightly different.

Any chance the show will be extended?

Although we have an announced date of the end of February, we are looking into extending it into March.

What other exhibitions do you have right now?

Our principal space has an exhibit through May 2 called Between Colony and State: Louisiana in the Territorial Period, 1803–1812. It examines the issues and personalities that were critical in hammering out what Louisiana, the state, was to become. We also have Louisiana and Cuba: Multiple Perspectives through April 17. It’s small but jam-packed with objects.

Where are your exhibitions housed?

Clustered around 553 Royal St. are several buildings that more or less connect to each other, including the exhibition spaces and the Williams Residence [a house museum on Toulouse Street that offers guided tours]. Those range from the early date of 1792 to about 1889.

You also have a research center on Chartres Street. Is the research library there accessible to the public?

We have a role similar to a special collections library. People can consult things on site and make notes. Within the provision of conservation considerations and copyright restrictions, we can provide copies for research purposes.

The Historic New Orleans Collection is open Tuesday through Saturday 9:30 to 4:30. The exhibitions are free to the public and guided tours of the permanent collection and the house museum costs $5. For more information, visit the Web site at www.hnoc.org.

190
previous War Stories
next The Little Theater That Could