Singer, actress, beauty queen and mother of four, Vanessa Williams has it all 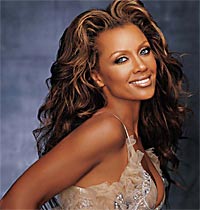 When Vanessa Williams was born, her parents sent out birth announcements that read, “Here she is: Miss America.” How foretelling! Not only was Vanessa crowned Miss America in 1983, but over the past 24 years she’s proved to be one of the most talented and prolific entertainers in show business. She has enjoyed major successes in the fields of music, theater, film and television. Garnering numerous awards and nominations for her dynamic work, she has shown there’s nothing she can’t do extremely well.

The stunning actress is currently starring in the hugely popular ABC series Ugly Betty as the power-hungry Wilhelmina Slater, the sly creative director of Mode magazine who is angling to take over the publication. The television show isn’t the only thing fans can to look forward to: the multidimensional diva is coming out with another album this year.

Vanessa was kind enough to leave her hectic schedule behind to spend some quality time talking with us about her awesome career, her children and the city she’s head over heels for. New Orleans loves her right back!

Hello, Vanessa! Your performance on Ugly Betty as Wilhelmina Slater has been so much fun to watch; you’ve been outstanding in this role.

What attracted you to the Ugly Betty script and to the character of Wilhelmina?

It was kind of a testament to surrendering. My manager told me there was a show they wanted me for, and I was unavailable, so they cast someone else. Then I got a call the day before they started production; my manager told me, “Look, they really want you, and you need to start tomorrow.” So I said okay, got the script that night and went to work the next day for my costume fitting, and that’s how it went.

What are people telling you about your portrayal of Wilhelmina?

I get comments when I’m racing through the airport, like “I love your role” and “You’re so deliciously evil!” And of course they ask me if I get to keep the clothes!

Yes, what is she, the witch in white? Each week, Wilhelmina wears some splendid offwhite outfit …

Patricia Field, who did costumes for Sex and the City, did our first pilot and she set the palette and tone for each character, so it definitely is a conscious decision. Basically Wilhelmina’s color palette is ivory, beige, gold and silver, and that’s about it. I wear one tone throughout the whole show. We did a breakout yellow show, and now we’re back to muted tones again.

Ugly Betty has been such a huge success in its first season.

I think one reason why so many people latched on to Betty is that it’s not about your blondhaired, skinny ingenue with the handsome guy doing the same old thing week after week. The cast is all fresh faces, a real mix of ethnicities, backgrounds and types where you normally don’t see it. And [executive producer] Salma Hayek’s been definitely instrumental in getting the cast she wanted. She was adamant about America Ferrera playing Betty, and she wouldn’t take no for an answer from anyone. That’s what makes her so great.

You are a New York girl, so shooting in Los Angeles must be hectic.

Considering we’re shooting 3,000 miles away from my home, yes—I’m spending lots of time on planes. And I’ve got so much going on with my children. My little one, Sasha, who’s 6, just went through the whole process of getting accepted to school in L.A. My son, Devin, who’s 14, is starting high school next year and doesn’t want to leave the school system he’s gone through his whole life; he wants to stay home in New York. My oldest, Melanie, is 19 and attending college in New York City, and my senior in high school, Jillian, is 17, trying to make the college decision right now, so it’s definitely been a big compromise and a lot of juggling. It probably would be a lot easier if I didn’t have four kids in four different schools!

You won an NAACP Image Award this year for Outstanding Supporting Actress in a Comedy Series for Ugly Betty. What did winning that award mean to you?

It was great. It’s my third Image Award—I won one for my album The Right Stuff, and I won one for the movie Soul Food. It’s reflective of my accomplishments in recording, film and television. I think what’s most important is that Wilhelmina Slater is on TV, and it’s not about being a black woman, but about having a fantastic role and approaching me because of who I am, not because of my skin color. It means we’ve made tremendous strides.

You’re still singing and really active with your music career as well.

Yes, and I’m getting ready to work on another album that I’ll hopefully have finished this year. I’m going to Japan for two weeks in May for concerts at the Blue Note in Tokyo and other cities, and I’ve got other dates here and there.

On March 19, you received your star on the Hollywood Walk of Fame, recognizing your contributions for more than 20 years to the entertainment industry. How exciting was that for you?

Thanks to Brian Edwards, who worked tirelessly at making that come true! [Laughs] He was the one who basically said “Girl! Why don’t you have a star?” and “Well, I’m going to make it happen, honey!” and “It’s going to happen on your birthday, and it’s going to be in the best location—leave it to me!” and then off he went. The hardest thing was trying to pick a genre, because I work in and love so many different areas. I wish there was some kind of multitalent emblem I could have chosen, but I chose recording because that was my first breakout success on my own terms.

And Brian Edwards, your client relations rep, is from Covington. How did you meet him?

As I said in my speech when I got my star, I need to thank Brain Edwards, who met me in Atlantic City at the Miss America Pageant in 1983 and has been stalking me ever since! [Laughs] We go way back! After he saw me perform, he went up to my mother and said, “Girl, you need to head back to Millwood [New York] and clean off that mantle, ’cause Girlfriend is going to win! And I want a pin!” He was from the Louisiana contingent and he wore one of my pins, and they were upset with him and he said, “I don’t care—I love her!” So he’s been a friend ever since; then he started working for the WE: Women’s Entertainment Network and American Movie Classics, and I started working for him doing different events. When I attended his 40th birthday party last August, we decided to work together even closer, so he’s been with me for over six months now and of course, he’s been stellar—you can’t get better than Brian.

Brian knows how to pick out a mean pair of Stuart Weitzmans, too!

Speaking of Louisiana … you were in Miami when Katrina hit, right?

It was my first hurricane experience, on the 28th floor of a high-rise on Miami Beach. I had my middle daughter there with me with one of her girlfriends; we tried to get through that night with all the rattling. There was flooding and things were uprooted, but it was devastating to watch what happened in New Orleans on TV. It was like an eternity for stranded people to be rescued from roofs. I was lucky enough to be able to fly into Houston, where I met some people in the Astrodome, and also presented a check for $15 million dollars through Ameritrade for the building of interim housing facilities for people who were homeless. What struck me most was the disparity between what was portrayed on television and reality; people were standing in line in the hot sun, waiting patiently for everything—not acting like savages. Families were being communal with one another in this massive convention center. There was no disorder or unrest; everyone was lovely and so thankful to be saved and to have a temporary home. I heard stories of triumph from people who made it out of the flood waters. Then I watched the different news teams spin and try to create an emotion and an atmosphere that wasn’t there. It illustrates that you really have to assess every situation on your own.

So true! Dramatization is for Hollywood, but the media continually gets itself caught up in sensationalism.

Oh, I was getting coffee one morning and this guy behind the counter said, “I was watching the news— why save New Orleans? What’s so great about New Orleans?” I was ready to haul off and punch him. He had no idea about the richness and the history of what the whole region is about.

Well, you either get New Orleans or you don’t. And that’s why we love you, because you do!

Cool! Well, I did a huge Lifetime TV movie about Sister Henriette Delille, from the Sisters of the Holy Family, called The Courage to Love, which was about the first order of black nuns in New Orleans and trying to secure the beatification of Sister Delille, so that definitely was a really strong connection I felt to New Orleans. Diahann Carroll played my mother, and it was a fascinating story about the separation of slaves and the quadroons and the balls and worshipping as Catholics and not being separated in church, and all this separation within cultures. And I’ve always loved the people, the music and the culture of New Orleans. I’m a big fan of Emeril’s. The Court of Two Sisters was probably the first New Orleans cuisine I ever had, back when I was there in fifth grade or so. Of course I don’t eat that kind of rich food all the time!

New Orleanians are the same way. We have to take a break every once in a while and have a dry salad so we don’t hurt ourselves.

[Laughs] Yes, I love the food, and I love the fusion of the African, Southern and European cultures. That grace—it’s a blend like no other. Just walking down the street and going from looking at a fantastic antiques shop to a woman doing voodoo to a fabulously trendy restaurant and then hearing live music from a bar with the doors wide open—it’s a real cultural blend, and you can see that on the faces of the people as well.

A little bird told me that you have a beignet fixation. I buy beignet mix from Café du Monde by the case, and I buy their coffee with chicory by the case as well! I’m looking for that fish fry too, like the kind they have in the airport, so if you know who makes it …

Thank you! I’d love to keep that in my cupboard!

You are one of the most gorgeous women on the planet! What beauty tips can you share with us?

Oh, thank you! The most effective thing is to exercise and eat right; there’s no way around it. Lifting weights made a difference in my muscle tone and my metabolism. Eating right is the toughest thing to do, so I have selfcontained, calorie-based meals delivered so I don’t walk past the craft service table on set and grab handfuls of M & M’s! It’s hard to have willpower! And keep your skin moisturized and clear; I’ve used Proactiv forever, so that’s certainly helped. But the bottom line is to stay fit and healthy.

So there is hope that we can look like you … awesome!