I’m not a gambling woman, but somehow I wound up winning the biggest lotteries of all: I hit the jackpot in the parent department, because when God delivered my brother, Treg, and me to my mom and dad, he certainly blessed us with an incredibly great fortune. 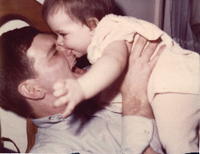 And I think that many of us in New Orleans feel remarkably lucky to be a part of the families we are. Since the “big daddy” of holidays is almost here, I thought I’d share some thoughts of what my father, Charles Joseph Fontana Jr., means to me.

My dad is known as a perpetually hard worker. Back when we were young, he worked more than 75 hours a week at three separate jobs to support us while he was enrolled in up to 21 hours of college classes a semester. During his off-time, he’d play our favorite game with us, which consisted of two teams placing small plastic toy soldiers strategically around either the Fisher Price airport or the Barbie townhouse and chunking a quarter or a doubloon at those figurines until none were left standing. We’d build tents in the den with our dad at night, made of blankets anchored by sofa cushions and tall, plastic Snoopy banks filled with coins, and then hide out in them. Camping outdoors had nothing on those outdoor tents!

And on Sunday mornings, Dad would hop in his blue ’66 Mustang, head over to Tastee and get us bead donuts (the chocolate-iced-with-coloredsprinkles kind, of which I am still addicted to) and we’d watch the greatest horror and sci-fi B movies ever known to man, from Dracula to Godzilla, with some Three Stooges episodes thrown in for comedic measure. With all his obligations, my father spent as much quality time with us as he could, not because he had to, but because he wanted to. He loved being with his family and he still does.

My dad has always been a talented guy. He excels at whatever he tries his hand at, and of course he’s too modest to ever report his accomplishments. His grades were stellar in school, and even with his unrelenting schedule, he graduated second in his pharmacy class at Xavier University. He’s so adorable he even scored a gig as a model for a milk ad at age 2—MaMaw is still so proud! In recent years, PaPaw told me about my dad’s first (and last) hunting trip as a young man.

My dad picked up a rifle and took his first shot at a running deer from the back bed of a moving truck. He managed to strike that poor animal in the center of the heart—not an easy feat for even the most seasoned of hunters. Knowing how caring and concerned my dad is for the feelings and wellbeing of the sentient creatures of this earth, great and small, it must have got to him; he’s never pointed a gun at an animal again. I know now from whence my extreme distaste for the “hunting mentality” stems. And although he would have made an excellent sniper, my dad uses his gift of precise hand-eye coordination and keen intellect in his career as a compounding pharmacist, one whose skill for making tinctures of accurate drugs for tiny, premature babies and other delicate patients, is certainly an almost extinct art of alchemy.

My dad is a funny man, an absolute original, yet always so patient and calm. The same dry-witted guy who shaved a map of the United States into his dog Buster’s fur (mind you, this wasn’t a poodle or anything with an easy-to-sculpt mane, this was a pit bull/Lab mix with defiant, wiry orange hair) also did the right thing by telling me at the back of the church on my wedding day that we could hit the road and I could go vacation with my friends instead of walking down the aisle, if I felt so inclined. He spent the morning alleviating the pressure, making it easier for me to focus on being a bride. Nothing ever gets my dad too riled up, really, except the time I proudly bought a pair of used platform shoes from a New York City sidewalk sale and he swore up and down I’d get a foot fungus, or the time Treg insisted on meticulously picking out what he’d call the gross “black thing” from each and every boiled crawfish tail and wiping it on the newspaper that lined the kitchen table, prompting my father to threaten to make a toasted “black thing” sandwich for Treg to devour.

There were many other times he could have exploded, but didn’t. Indeed, my father has always had the countenance of a pacifier, a real truce maker: Who better to take permanent possession of our blankets, bottles and binkies when the time was right than my father’s rubber-masked alter ego, “Yellow Yucko,” a mysterious, warty half-chicken, half-man who magically appeared in our kitchen on a broom wearing a cape and a witch’s hat, often in boxer shorts, communicating in soft, spastic, groveling chicken-esque peeps.

And we understood the language. After bursting with anticipation awaiting his arrival, we’d surrender those habitual childhood security clutches in a heartbeat standing before the almighty Yellow Yucko, a character I now realize was a product of my dad’s highly developed sense of humor, tailored for his children.

It’s pretty overwhelming for me to think of how exactly to thank my dad for being the dad he is and always has been, for all the time he’s been there for us and everything he’s done for us, without ever wavering from the responsibility and love of family. Isn’t it amazing to think that dads were once young boys themselves who grew up and learned to shoulder the weight of the world as they emerged through that difficult transformation into adulthood? It’s hard to take it all in, an enigma so monumental, that level of unselfish, tireless devotion and commitment that fathers possess. I haven’t seen a Hallmark card yet that can describe with complete accuracy everything my father means to me, and I’ll bet others will agree. But the sentiment we mean to project is a strong, serious, joyful, thankful, completely loving one, and that is to all the dads of New Orleans: You are the greatest fathers in the world. Especially mine. Happy Father’s Day!