If the Saints want to win, they must restore the equilibrium 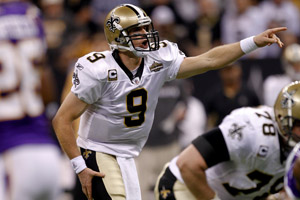 Standing pat in the NFL, as in life, is tantamount to death. In order to survive, teams must maintain balance, and to do that they must keep moving forward. That is true for the mighty and meek alike. On September 9, when the 53 Saints players ran out of the Superdome’s home-team tunnel to meet the Minnesota Vikings in the season’s first game, they emerged through a cloud of euphoria that has enveloped New Orleans since February 7. At that moment the need for balance had never been greater.

A season full of accolades and distractions—there was Drew Brees at the ESPYs and the talk-show circuit, Sean Payton releasing a book, the whole team being feted by the president, constant news alerts on Reggie Bush’s Heisman Trophy travails and so on—had consumed players and fans, culminating in a first-time-in–New Orleans NFL Opening Kickoff special, replete with performances by Dave Matthews and Taylor Swift. Saints fans buzzed through the grand new tailgating area, Champions Square, filling the gaping void once occupied by the New Orleans Centre mall. Commerce and consumerism had literally and figuratively been replaced by esprit de corps and spiritual unity. A parade concocted by the NFL itself and broadcast across the country rolled out like a red carpet leading to the great moment that seemed to have taken an eternity since the Super Bowl win to witness: the unfurling of the (still) truly surrealistic Super Bowl victory banner, right next to the 2009 NFC South and NFC Championship banners.

Finally there was not so much empty wall space in the Superdome’s cavernous innards. After the gold streamers finally finished falling, after an oddly slow and folksy version of the national anthem was completed, and after Drew Brees led the Saints faithful in a new tradition of his own making (a booming “Who Dat” chant echoed three times by the fans in succession at Brees’ signal), it was—at last—time for some football. The Saints and the city were teeing off the entire season for the entire nation.

Piercing the Vikings’ defense like a knife through foie gras, the Saints’ offense seemed to have started exactly where it had left off, taking but five plays and less than two minutes to score a touchdown on the game’s opening salvo, a brilliant 29-yard pass by Brees to Devery Henderson. The Vikings were on their heels again, and Saints fans, already in full crunk, burst into celebration. It seemed as though the party would never end. However, the Vikings are a team that, until last January, have held nearly all the cards against the Saints, winning 20 of 27 of the franchises’ games together, a pretty dominating figure. And yet, acting like a bully who had gotten his lunch money stolen and then run to the principal to whine, the Vikings’ head coach, Brad Childress, made snide remarks and insinuations that the Saints had somehow cheated the system by winning last year’s championship game, suggesting that were it not for the turnovers, (allegedly) poor officiating, faulty decision-making by 19-year vet Brett Favre, they “should have been, would have been, could have been” the champions. It was the refrain of losers, one that Jim Mora had derided all those years ago and recognized well in New Orleans for what it was. In the course of the Vikings game, it became apparent that this first game of 2010 would not be like the last game against the Vikings. The Vikings managed to do what had seemed impossible—they silenced the Saints home crowd with a blend of rushing, conservative offense, ball control and smart defense that slowly strangled the Saints’ offense. The game turned from one of speedy strikes and defensive parries—the Saints’ style of play—to one of plodding and carefully managed lines of scrimmage—the Vikings’ style of play.

To compound problems, a very bad trend seemed to be developing: Sean Payton had reverted back to his old ways and was throwing on nearly every down. The Saints could not hold the ball and could not score; no matter how perfectly Brees hummed the ball, they could not score and they could not run the ball. The crowd became eerily quiet, perhaps finally crunked out from all that hoisting of the Lombardi Trophy above their shoulders. And then a funny thing happened. Like watching a kung fu master unravel his strategy, it became apparent what the Saints were doing. Payton and defensive guru Gregg Williams were using their opponent’s strengths against them. In the end, balance was restored. The Saints’ rushing game was reinvigorated, and the Saints’ won playing the Vikings’ game, surely ending all doubt in the Vikings’ minds as to who was better. Their grand master of passing, Brett Favre, could only stare at the green swaths of gridiron the Saints had left him, unable to complete the necessary passes, unable to consume its inviting terrain.

The Saints left the Dome that night with a 14-9 victory, and it offers a lesson for what suddenly looks like a tempting menu of games to gorge upon through October: two faltering division opponents in Atlanta and Carolina, a precocious but still immature Tampa, a faltering Arizona, and a perennially woeful Cleveland. A real treat of a game will be when Pittsburgh comes to the Dome on Halloween night. In order to repeat, the Saints will need to maintain their balance, carefully managing not only their rushing and passing games, and stressing defense as well as offense, ensuring they do not peak too soon while at the same time not losing the energy that has served them so well.

97
previous Kickoff to Glory
next The Madness of Les Miles