In New Orleans, a city full of young and promising culinary talent, the face of Chef John Besh is probably the most recognizable. 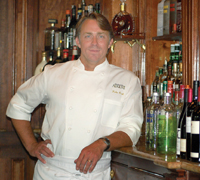 In fact, one can no longer call him “promising” as he has already fulfilled his early potential and then some. Besh now runs four restaurants in the New Orleans area, and in 2006, he won a Best Chef award from the James Beard Foundation, one of the highest honors an American chef can receive. Besh has now officially achieved the status of “celebrity chef.” Add to the recipe his philanthropic work, and ABSOLUT Vodka had an obvious local candidate to come calling on for its new, locally inspired vodka.

The limited-edition ABSOLUT New Orleans vodka will be launched July 18 at the fifth annual Tales of the Cocktail festival. No one in the general public has tasted it yet, but rumor says the vodka’s flavor will be mango on the front end with a spicy black pepper kick arriving afterwards. Onehundred percent of the net profits from the product will be donated to charities serving New Orleans and the Gulf region, including Habitat for Humanity New Orleans and the Tipitina’s Foundation.

Besh is the key culinarian associated with the project. Appropriately, he is concocting three cocktails for his three downtown New Orleans restaurants (his fourth restaurant being La Provence in Lacombe), and each libation is named for the street that runs outside. Restaurant August will serve the ABSOLUT Tchoup, Besh Steak will have the ABSOLUT South Peters, and Lüke will mix up the ABSOLUT St. Charles.

Many locals may not have had a chance to visit Lüke yet, as it just opened in May in the space that used to house Susan Spicer’s Cobalt. Long-time New Orleans residents who fondly miss the iconic German restaurant Kolb’s will find a balm for their nostalgia. “It has been my dream to recreate the Franco-Germanic brasseries that used to dot our city’s landscape and gave way to a more modern yet muddled style of New Orleans cuisine,” says Besh, whose family name had been spelled Besch in the original German. “So you can say that I wanted this restaurant to be a nod to our city’s German- Alsatian heritage.”

In lieu of an honorarium, ABSOLUT is providing Besh with a significant amount of money to give to a charity of his choice. The recipient and amount haven’t been announced yet, but from his occupation and his past involvements with hunger and restaurant organizations, one would expect a food-related non-profit to be the beneficiary.

Besh performed food-related charity work personally right after the hurricane. First, he and his colleagues set up areas to feed people at hospitals and police stations on the Northshore, and once St. Bernard Parish dried out, they moved operations down there to help nourish parish officials during those particularly trying times.

Also, soon after the hurricane, Besh appeared on the popular Iron Chef television show and won the episode. “Defeating an Iron Chef just after Katrina was one of the my greatest professional accomplishments ever!” he exclaims. “It was such a boost to my staff, and it ignited a fire in us all to just push harder in an effort to make Restaurant August one of the best restaurants in the country, not just the city.” In spite of the many challenges New Orleans still faces, Besh is impressed with the progress the city has made since the days right after the storm: “The recovery efforts for the most part has exceeded my wildest expectations,” says Besh. “Seeing the city underwater and under siege, I am truly amazed! Yes, we have a lot we must do and we run into new problems everyday; however, I’m ever hopeful that enough of us will make a stand, and we’ll be the driving force of building our New Orleans.”

Through his business investments and his charitable endeavors, it’s clear that Besh isn’t just giving lip service about his devotion to the city. His plan for the future is to continue to grow his company while supporting the people who’ve helped him achieve his success along the way.

“Some may look at New Orleans and see problems. I see opportunities,” he says.

219
previous Way-Cool Foods
next Louisiana in a Jar