Home SPORTS Who Are These Guys?
SPORTS
December 3, 2010 Paul Wegmann 0

Who Are These Guys?

A bevy of new faces lifts up the Hornets 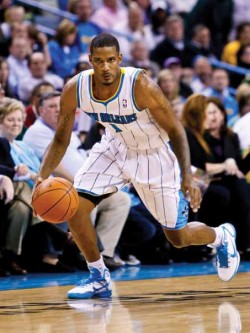 The NBA has finally arrived in the Crescent City. Many people in this football-crazed town may not realize it, but basketball is a great game, one with a long history and a worldwide following of millions of passionate fans who devote themselves daily to watching the athleticism, competitiveness and creativity of its amazing players. And yet the game, especially the professional variety, has escaped the devotion in New Orleans that it has engendered elsewhere. The reason is that for nearly the last six years, the Hornets were coached in a very boring style of play by Byron Scott. Rookies did not play and were even suppressed and coached down; there was little platooning; and the concepts of the effective sixth man, 10-man rotation and up-court flow were absent. The flash and dash seen in Los Angeles, the gutsy gamesmanship found in Boston, the remarkable chemistry in Dallas, these things had never found their way to New Orleans.

The 2010-11 season followed hard on the heals of major changes: Scott was fired and longtime general manager Jeff Bower departed; almost the entire roster was turned over; and there was talk of possible league contraction, along with disconcerting rumors of Chris Paul’s discontent and possible departure. Fans were dismayed and whispered it would be best to wait until after football season to attend a game or check the Hornets’ place in the standings.

And then something special happened: New head coach Monty Williams and new general manager Dell Demps began building a remarkable team, the most remarkable team that nobody in New Orleans—or the NBA—knew about. For flash and dash there was the mainstay, Paul, who stuck it out to the great relief of local fans, but added to the mix was Trevor Ariza, who brought a championship ring, game smarts and heady play on offense and defense. The Hornets had struggled for years to find a complement to Paul at the other guard position, and they seem to have finally found their man in Ariza. Additionally, the team built experience and depth behind them, layering former Philadelphia Sixers stalwart Willie Green and former Toronto Raptors point guard Jarrett Jack, both of whom bring versatility and the ability to sub in for Paul without losing momentum. The result of the remaking of the backcourt has been startling; the game tempo is constantly high, the team is always a threat to score, the decision-making has vastly improved over last year and the ball movement is beautiful to watch.

Up front, the Hornets again built upon a cornerstone, David West, the same, reliable, capable scorer and big playmaker that fans have appreciated throughout the years. This year, though, West has help. Via more preseason horse-trading, the Hornets parlayed expendable roster space and draft picks into better depth among their forwards and centers, including Marco Belinelli, Jason Smith and Quincy Pondexter. Belinelli especially looks like he might be a star one day. From Bolgna, Italy, he shows to great effect the fundamentals of dribbling, shooting and defense so evident in European players today and often so lacking in American ones. Likewise, Smith, all of seven feet tall, is a huge body that allows the Hornets flexibility in defensive alignments but also occasionally makes an important score, shows discipline and is highly active on the boards, something the Hornets have lacked from their bench for several years now. Adding to this frontcourt, on the inside the Hornets retained their anchor at the center position, Emeka Okafor, who continues to bring energy and athleticism within a large frame, allowing him to outmaneuver opposing big men.

In the end, there has been almost an entire disposal of last year’s team with the exceptions of Paul, West and Okafor. After that core, the range of talent has greatly expanded, providing increased versatility, overall tenacity and real team chemistry. Not only that, but coach Williams has also crafted an entirely new philosophy of offense, defense and game management that local basketball fans have never before been treated to. Most noticeably, there is a real platoon system in which backups from the bottom of the roster are substituted in, scoring points and running up and down the floor on exhausted and confused opponents. Plays using crisp passing and perimeter and post movements are executed with alacrity. Meanwhile, the young players are effectively intermixed with a veteran presence, allowing their youthful talent to shine while not surrendering turnovers nor suffering from poor on-court decisions. The result has been a Hornets team that has already begun challenging for supremacy in the Southwest Division and maybe even in the Western Conference itself. Incredibly, the Hornets for the first time ever won nine of their first 10 games and led the league in winning percentage one month into the season. But the ultimate victory for New Orleans is in having exciting pro basketball that is worth seeing every single night just for the pure love of the game.

91
previous The Madness of Les Miles
next Finish Strong