The Saints seek to kick down the playoff door once again 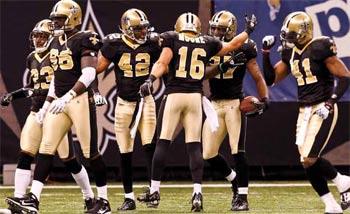 For the Saints and their fans, the days of redemption, parade victory laps and underrating opponents (Cleveland, Arizona, even Atlanta) are over. The truth is plain to see, at least in the replay video: a Garrett Hartley miss in Week 3 versus the Atlanta Falcons has had devastating effects throughout the year. As always in the NFL, amazing things can happen. But now that Atlanta has won its West Coast test in Seattle, the Falcons will almost certainly emerge as the NFC West division champs due to a myriad of tiebreakers in their favor. Not only that, but the ricochets from Hartley’s hook reverberate further. Because the Saints will not be division champs they will be wild card entrants. And as wild card entrants they will be the ones then possibly forced to go to Seattle for a midwinter playoff tilt. A better scenario would envision them traveling to St. Louis where the matchup (and weather conditions) would be better versus the Rams in their domed stadium but where the Saints would nonetheless have to face screaming fans years and years removed from their last playoff appearance (sound familiar, Who Dats?).

In either scenario, the reward would more than likely be a ticket to freezing Philadelphia or subfreezing Chicago. For anyone who recalls the frigid 2006 NFC Championship in Chicago, such an idea is not too pleasing. The best possibility for the Saints is that either the New York Giants or the Green Bay Packers win their wild card matchup, then beat Atlanta, and the Saints somehow emerge from their wintry trek to return home for an NFC Championship game in the Superdome. That is almost the only real possibility for the Saints to get a playoff game at home now that Seattle failed to beat Atlanta. All that is the result of Hartley’s miss against Atlanta. It is a sort of butterfly effect of crazy proportions by which Saints fans found themselves in the unforeseen position of watching what should have been a meaningless Seattle Seahawks against Atlanta Falcons game at the very time when they should have been doing their Christmas shopping.

Hartley’s kick has been a metaphor for the season, the kind of mistake that eats away at coaches, players, kickers and fans for months. That kick is like a crash that remains in one’s rearview mirror: a 2-0 start to the season, a table set to go 3-0, two unfathomable interceptions by Drew Brees of the sort last seen in 2007–08, a lead gained, a lead lost, a Saints defensive stop, a perfect overtime drive and the perfect dramatic game-winner by last year’s golden-footed fate’s darling, and … he missed it. Some may say the snap was off or that a driving Falcons lineman knocked Hartley off his line, but no, that was not it.

The subsequent series saw a Saints block on the Falcons’ attempt to win; only to have defeat snatched from the jaws of victory by head coach Sean Payton who had called a timeout at the last possible moment. And there the theme was set; where the Saints had ridden the tides of fate to ever greater heights last year, something had snapped back out of alignment, something crucial. Later, mystifying losses against two teams with almost no capable quarterbacking and supposedly putrid defenses, the Arizona Cardinals and the Cleveland Browns, compounded the meme. Although the Saints were winning, more than all but two teams in the league, the Falcons and the revivified New England Patriots, they had misplaced whatever blessings that had assuaged the hand of doom that for so long held the team, as well as its fans and very city, down for so long. The result was the very real possibility that the team would be split from its source, its home. The loss against Arizona, like the Falcons loss, could again be traced to a single kick—this time by Hartley’s replacement, Jon Carney—from the exact same distance. Carney had not missed a kick so short since 1998. In the Cleveland game, the Saints suffered due to two Drew Brees interceptions returned for touchdowns by a lineman, David Bowens, who in his 12-year career had never even had one. All this occurred while ex-Saints hero Scott Fujita had the game of his career, seemingly making every big play there was to make, including intercepting one Brees pass himself.

And yet through all this the Saints have emerged with a winning record, while beating two other winning teams and will close by facing two more, Atlanta and Tampa Bay. Since Cleveland, something has clicked; a key has turned a tumbler, the tumbler has unlocked the door. Whether the Saints walk through that door depends on their attitude and desire to retain the feeling that made them and their fans so great. And there has been a palpable sense of change in the fans as well. Like exhausted partygoers who had overextended themselves on the weekend before Mardi Gras, early in the season they seemed to have no strength left for the Carnival still to be enjoyed. That Carnival would be the Saints triumphal march through the NFL as reigning kings, as the owners of the Lombardi Trophy, holding it high to be drunk from by all.

New Orleans had its party, but its citizens and its team were hung over. Alighting as though from a very rude wake-up call after the Cleveland game, the Saints began to rise from their stupor and bore down on getting back to work. First, Brees largely eliminated the foolish, harmful turnovers.  For instance, against Atlanta he had even pitched, underhanded Archie Manning–style, to an opposing defender with no reason, giving the Falcons a much-needed lift, giving the opponents points and potentially taking his own team’s off the board. That kind of thing has disappeared as Brees has returned to his highly efficient, smart play of 2010. With one exception, a dropped pass at the goal line versus the Rams, Robert Meachem has turned into a rock-solid scoring threat from anywhere within 10 yards of the 50-yard line, which makes for a remarkably large red zone. The running game has reemerged. Chris Ivory has made the most of his opportunity in the NFL, and without starting in any single game he has become the primary ball carrier for the Saints. Ivory has stepped into the former role occupied by Deuce McAllister and Mike Bell, extending drives, running upright, carrying defenders, taking short yardage and goal line dives with full force while also showing real burst from the line and game-breaking capability.

Meanwhile Reggie Bush and Pierre Thomas have returned just in time for the playoff run and the playoffs themselves, giving the pass-oriented Saints the faculty once again of being a running back–driven team that can develop the short game, field position and time of possession strategy as well as anybody. Tight end Jimmy Graham has also come to the fore as the rarest of finds, a big player who can run downfield past safeties with ease while also securing balls in the end zone using a height advantage immediately alarming to any defense that faces him. On defense, Malcolm Jenkins has grown up before the fans’ eyes, taking on an almost Darren Sharper quality in the way he patrols the center of the defensive backfield with the threat of stealing a ball from any player at any time, as Roy Williams of the Dallas Cowboys found out in that crucial, electrifying finish on Thanksgiving Day that seemed so very reminiscent of the 2009 Saints.

With the Saints there is always the ethereal joined the earthly. A team and city so beset by time and the whims of nature (or a bouncing, oblong, leathery ball, for that matter) cannot divorce itself from the magic that created its championship season of the year before. A team propelled forward by the foot of a young, wide-eyed Texan, Garrett Hartley, could also be buried by it. A team crafted on the arm of a redeemed warrior, Drew Brees, could also be sacrificed on it. And yet the Saints are a team that has gained the championship by hard work, discipline, desire, speed, strength and intelligence. They have out-toughed “tough guy” teams like the Steelers and out-paced fleet teams like the Cowboys. But the place where the ethereal meets the earthly is the Louisiana Superdome, a golden coliseum partly standing on an old cemetery, on the alluvial ridge left by the continent’s oldest river. It is in the Dome that the people and the team join together to meld an irresistible force of nature, much like the river itself. If the playoff pieces fall just right to land the championship game at home, the Saints fans will fill the Dome to do their part to make sure that the Lombardi Carnival floats down St. Charles Avenue again. Because as everyone knows, New Orleans does Carnival every single year and it does it better than anyone else—we just can’t ever let that feeling go.

129
previous Who Are These Guys?
next How Sweet It Is