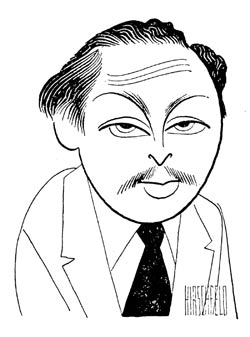 The Historic New Orleans Collection is housed in several buildings in the French Quarter, including the Louis Adams House, where the playwright Tennessee Williams briefly boarded in the 1930s. Though born and raised elsewhere, Williams lived in New Orleans for years, called it his spiritual home and set several plays in Louisiana, including A Streetcar Named Desire. It’s fitting that this year, the centennial of Williams’ birth, the Historic New Orleans Collection is hosting the exhibition Drawn to Life: Al Hirschfeld and the Theater of Tennessee Williams, a collaboration with the Al Hirschfeld Foundation. Hirschfeld, a legendary artist who died in 2003 just shy of his own centennial, is perhaps best known for his drawings relating to theater. Recently I spoke to David Leopold, archivist from the Al Hirschfeld Foundation, about Hirschfeld, Williams and the exciting new exhibition.

What made Al Hirschfeld so special?

Al Hirschfeld was not simply the best at what he did. He was the only one who did what he did. It’s often called caricature because he had to call it something. But he did not practice an art form that was pejorative, which is what we usually think of when it comes to caricature. He had an artist’s eye and a journalist’s intent to capture what he saw the way he saw it.

Also, when he first came of age, the newspapers were filled with drawings, but most of it was hack work. They would get a publicity photo and use it to reproduce a drawing. But Hirschfeld would go to rehearsals and to out-of-town productions and fill his sketchbook with images that he’d take back to the studio and turn into a drawing. The works themselves are wonderful visual documents of what the shows looked like and in many ways felt like. That’s what he was so great at capturing—the action and the movement of a show as well as the details of the set and the costumes.

How many of Williams’ plays did Hirschfeld cover?

Hirschfeld drew Tennessee Williams or his plays 52 times. The only play he ever illustrated in his career was A Streetcar Named Desire. Hirschfeld first drew Williams when he was on Broadway with The Glass Menagerie in 1945, and his last Williams drawing was in 1995 for a revival of The Rose Tattoo. In between, he captured not only every original production but every significant revival on or off Broadway.

It sounds as if Hirschfeld felt a strong artistic affinity with Williams.

Hirschfeld said, “Williams was a great poet as well as playwright. Poetic images such as his are for me the permanent material of great art, defying time and current opinion.” Hirschfeld believed that theater was the province of the author rather than the director or even the actors. He said that what he did was take what the playwright wrote as portrayed by the actor and reinvent it for the reader. But it always goes back to the playwright. So Hirschfeld understood what Tennessee Williams was about.

What is the significance of this exhibition?

It is the first time these drawings have been brought together for viewing. We’ve borrowed from a number of significant public collections—the National Portrait Gallery, Harvard and the Billy Rose Collection at the New York Public Library for the Performing Arts. So we’ve really pulled together the collection from a lot of disparate sources, and they really do tell an amazing story, one that has never been told. We have a front-row seat on Tennessee Williams’ entire career in the 20th century.

What led you to collaborate with the Historic New Orleans Collection on the show?

It started as a conversation between [critic] Rex Reed and [Hirschfeld’s widow] Louise Hirschfeld. Rex had just come back from the Tennessee Williams Festival a few years ago. He was talking about it with Louise and they discussed the drawings that Hirschfeld had done. Louise called me and asked how many Tennessee Williams drawings we had. Together we realized that a show would be pretty remarkable. Rex felt the Historic New Orleans Collection would be the place. We contacted John Lawrence [director of museum programs] and he instantly got it. He saw our pieces and he wanted to do the show. I worked primarily with [manuscripts curator] Mark Cave at the Collection.

What has the Collection contributed to the show?

They have one of the best Tennessee Williams collections in the world. So we’ve augmented the drawings with all kinds of pieces from Williams’ personal and professional life. The personal because so much of what he drew on were his family life and his friends. Professionally, there are manuscripts, window cards from productions, photographs, published pieces.

For more information about the show, check out hnoc.org and alhirschfeldfoundation.org/spotlight/drawn-life.

231
previous Art on the Horizon
next Left of Center