A September to Remember

As the season opens against three tough opponents, fans hope that the Saints have what it takes 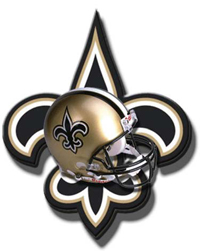 New Orleanians, whose football modus operandi has seemed for so long to border on the permanently pessimistic—always forced by frequent 3-13 and 6-10 seasons to see the downside of every opportunity—suddenly find themselves imbued with the sunny optimism of the happily blessed, a state of mind usually reserved for the likes of Cowboys fans. We see the upside of every challenge presented in the 2007 schedule. In contrast to years past, few teams would seem to pose a challenge to Saints fans today. Not even the face-off in the primest of all prime time with the NFL Champion Colts, a team that last beat the Saints 55-21, appears to raise signs of worry.

The Saints started 3-0 last year, bounding forward off the momentum of an unprecedentedly raucous New Orleans crowd ready to feast on toasted Falcon. Their fervor was stoked by the Saints’ year-long hometown hiatus and the need to blow off copious Katrina aggravation. The start to this season could be equally key to the team’s fortunes. Just like last year, the Saints must get through playing their first two games on the road (against Indy and division rival Tampa Bay) and then return home for a prime time game against a tough opponent, the Tennessee Titans led by Reggie Bush’s former nemesis, Vince Young.

Come September 6, Dungy, Manning (a.k.a. “Archie’s kid”), Harrison, Wayne, Clark, Gonzalez, Addai, and company will surely be ready to sharpen their already well-advertised offensive skills on a Saints defense that was most vexed by the big play in 2006. And the hope is that the Saints have either successfully buttressed that side of the scrimmage line or found a way to add even more punch to their potent offense, to make it a top-flight NFL squad that perhaps is the only one that can arguably challenge Indy’s for supremacy. Drew Brees will be looking forward to a legitimate shot at capturing the Saints’ first ever MVP crown; Deuce McAllister will be running hard to take over games, like he did twice against the Eagles last year, and further capitalize on his strong 2006 comeback; Reggie Bush is expected to turn his second half of last year when he learned to turn his runs straight upfield and break long gains off the pass into a full season of glory this year; John Karney will be seeking new defenses to pound; and Marques Colston will be facing down the cynics who claim that a sophomore slump means he cannot repeat the amazing feats of his rookie season (70 catches, 1,038 yards receiving, and 8 touchdowns in just 14 games).

The offensive line, so questionable at the beginning of 2006, now enters the season as one of the top five overall lines in the NFL, the so-called “J-Line” of (from left to right) Jammal Brown, Jamar Nesbit, Jeff Faine, Jahri Evans, and Jon Stinchcomb. But to compete with the likes of Indy and to overcome the Chicagos of the world, the franchise needed even more firepower for this campaign. It appears that they may now be truly loaded for bear (pun intended), having added tight end Eric Johnson, a former Yalie who averaged 48 catches in four full seasons with San Francisco and who could prove to be Brees’ San Diego East version of Antonio Gates. In addition, the team has drafted Robert Meachem, a blazing SEC playmaker who admittedly has had a bumpy preseason, and acquired from Miami kicker Olindo Mare. Mare could provide extra leg on kickoffs, which should help the defense, and on those pesky late, late crunch-time field goals, something the albeit consistent Jon Carney had trouble with. But doubtlessly the Colts’ greatest brute force will be absorbed by the Saints’ defense. It is a given that the expertly trained, laser-eyed, Howitzer-armed Peyton Manning will exploit every weakness every time one appears. The Colts are a team built on the big play, and they will be facing a Saints team whose biggest weakness has previously been just that. Either the Saints’ core squad of Smith, Grant, Thomas, Young, Fujita, Shanle, Simoneau, McKenzie, Thomas, Craft, Harper, and Bullocks will have to improve their play, or new names will have to emerge.

Those new names could be safety Kevin Kaesviharn, the vet acquired from Cincinnati as a hard-hitting, hard-working ballhawk and defensive captain; linebacker Brian Simmons, another former Bengal fixture and first round draft pick who has had three seasons of 100-plus tackles and an average of nearly 8 tackles per game and 115 starts under his belt; defensive tackle Kendrick Clancy, a former Steeler, Card, and Ole Miss Reb who brings experience and size to a position that was at times overmatched last year; Jason David, the speedy and disciplined cornerback coaxed over from the Colts themselves; or perhaps any one of the young cornerbacks who have been ramping up their football educations. The most prominent of these players is Usama Young, the speedy draft pick out of Kent. Chris Hanson, who specializes in the coffin corner (a lost NFL art), has never had a kick blocked and has averaged less than 10 touchbacks per year in his career, he could boost the punting and return games. Also, return man Lance Moore could get playing time as a receiver and is the going favorite to be this year’s Marques Colston.

This September could be a month to remember for Saints fans. It could either be one in which the improbable dream of the long-promised but never likely Super Bowl march finally began or one in which the fans once again see setbacks displace shining opportunity. But maybe, just maybe, pretenders’ and doubters’ minds alike will be changed by the last night of September. And by February, the clouds of losing seasons past will be chased away. The hearts of New Orleanians will be ringing, the souls of Hap Glaudi and other deceased Saints fans will sing “Marchin’ In” while dancing down Poydras, and the tale will one day be told about how a city’s stars stole away a coveted trophy named Lombardi. Meanwhile, the champion Colts are first up. Get ready, Saints fans, football season is upon us.

83
previous Blown Away by the Zephyrs
next The Tiger Unleashed