He wandered into my life— and changed it for the better 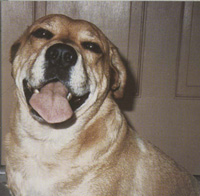 Little did I know that on a pleasant Saturday in April 1989, I’d meet what would turn out to be one of the most significant redheads ever to grace my life. I strolled out my front door and to my surprise ran right into an interesting-looking dog. He was a stocky sort of dude, outfitted in a fine orange coat, just as cool and confident as could be, completely acting as if he belonged there.

One by one, my entire family came outside to check out this four-legged interloper and give him a pet on the head. With that, the stray-dog routine commenced: We got him fresh water and food and started asking the neighbors if anyone knew where he lived. I figured he’d hang out a bit and then head on his way, but when I returned home from running errands hours later, the cheery guy was still on the porch, looking quite comfortable. With our new friend still in residence on the porch as darkness approached, my mom escorted him to our backyard and promised to vigilantly search for his owners. “Put an ad in the paper, Pam,” my dad issued. Two men came by that week with hopes of finding their missing dogs, both leaving without the orange fellow. “Take that ad out of the paper, Pam,” said my dad, who could no longer deny his strong attachment to this dog. “His name is Buster.”

Once officially added to the Fontana family pet roster, I started telling my friends we had a new dog. “What kind of dog?” someone asked. “I’m not sure,” I responded. “He looks like … a dog.” When Buster had his first exam, our veterinarian turned to Dad. “Charlie, you’ve got yourself a pit bull mix here.”

Whoa. I’d heard of the horror that pit bulls inflict, how they maul babies, snack on cats and kill people with targeted conviction. But with his quiet charm, even temperament, loyal demeanor and terrific wit, this pit-mix boy had endeared himself to us rather immediately. Buster wasn’t going anywhere, despite his breed and the vicious rumors that swirled around it.

The amazing experiences we shared with Buster over the years were countless. A joyful photo I snapped of him in his resplendent orange coat with his big beef baloney tongue hanging out— next to an equally corpulent pumpkin, his perfect doppelgänger—won him a place in a calendar Little did I know that on a pleasant Saturday in April 1989, I’d meet what would turn out to be one of the most significant redheads ever to grace my life. I strolled out my front door and to my surprise ran right into an interesting-looking dog. He was a stocky sort of dude, outfitted in a fine orange coat, just as cool and confident as could be, completely acting as if he belonged there. Mr. October contest as “Mr. October,” one of the many nicknames he’d acquire in his lifetime, along with “Boo Boo,” “Butta Boy,” “Poopanooni,” and others. My mom created songs about him, and while fixing his breakfast, she’d sing him his favorite tune, “He’s the King, his name is Boo, he ain’t no cow, he don’t go ‘Moo!’ ” and he’d descend into a trance, swaying his big noggin from left to right, often throwing a few leg kicks into the mix. My brother would get on the floor and ask him “What’s up?” and he’d emit a few soft grunts, similar to the sounds King Kong vocalized when he seemed content. And he loved taking his nightly walks around the block with his best friend, my dad, the pharmacist whose latent barber tendencies eventually surfaced and were manifested upon poor Buster. Even when my dad crop-circled a map of the United States in his fur, accidentally clipping the dog under his front leg while attempting Florida, Buster kept his cool and managed not to polish him off; their bond was deep and unbreakable.

After thirteen glorious years together with this remarkable animal, Buster’s twilight began to dawn. My magnificent dog had reached the point in life where his dignity was becoming compromised. Watching him struggle to move was heart-wrenching, and discovering that he was in a lot of pain was the final straw; it was his time. On the last day we shared with Buster, we sang to him and petted him, and with his voracious appetite still intact, our beloved “hog jaw” devoured slices of pizza, milk shakes and a huge rib eye my father grilled for him, a fitting last supper for a true king of canines. When leaving for the vet’s office, I opened the door and knelt on the front porch, encouraging Buster to try his best to come to me. After taking his last step on earth, Buster collapsed in my arms, in the exact spot where the cycle of a wonderful life with this beautiful dog had begun.

As a full-fledged member of our family, Buster enriched our lives tremendously, so you can imagine the wide range of emotions we all felt after learning of the dogfighting ring made up of pit bulls that now estranged Atlanta Falcons quarterback Michael Vick ran with his idiot chums. Personally, I feel it is the human savages who dispense their awful, dirty deeds on these noble creatures who should incur the wrath of punishment, not the dogs. We must understand the position of a responsible owner and treat dogs with respect, so they can flourish as cherished pets that thrive with us, not monsters who are averse to us. A bite from a pit bull is almost always the fault of its owner.

Mankind has taken such enormous strides in rendering mind-blowing innovations. We’ve rocketed human beings to the moon, had them walk around on it and then managed to bring them back home in one piece to talk about it! Yet there is no final erasure thus far for the expenditure of cruelty, abuse and indignities exacted by man onto sentient creatures, whether animals or other human beings, as he sees fit. The sick fact that some derive enjoyment through witnessing dogfighting is beyond my comprehension.

What hurts the most is knowing that dogs who are subjected to being starved, pumped with drugs, used as bait, used to fight, and other kinds of inhumanity will never know how good life can be with the right human being. They’ll never understand what a big hug feels like or come to know that intense level of unconditional love that thrives between dogs and their fortunate owners. They’ll never appreciate a special song sung to them. And they’ll never get the opportunity to try out for the coveted role of Mr. October. How sad. I’m just happy that instead of stopping at Michael Vick’s front porch, Buster landed on mine.

80
previous Get the Party Started
next Halloween Happenings