Chef Matt Murphy serves up a pint and a plate 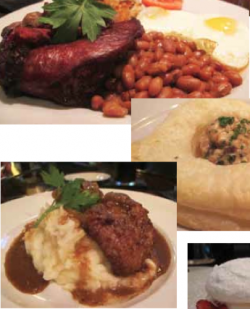 Coming home from school, young Matt Murphy would let the air out of his own bicycle tires, creating an excuse to stop at his dad’s confectioner’s shop and watch him craft meat pies and pastries and terrines.

As afternoon faded from the seaside village of Blackrock (a Dublin suburb), father and son drove home together, the deflated bike in the car’s trunk.

Hanging out with his father “is where I got the idea of having a career in food,” says Murphy, who’s also kept that sly sense of humor (especially when it comes to remaking Irish snacks—in his hands, the Jaffa cake becomes a stack of pancakes, Nutella and oranges; the Lion candy bar becomes a semifreddo custard of richly milk chocolate, peanuts and fluffy cream.)

The Irish House had its hard opening on Sept. 17 (celebrating the half–year mark to St. Patrick’s Day), and “it’s been a fast and furious, take no prisoners” kind of pace, Murphy says.

It’s his home, and he’s utterly transformed the space.

The dining room has been warmed up with an expansive bar, cozy tables and dangling stained–glass lights. Claim your seat, then approach the fiddlers and flutists playing beside a virtual fire.

Continue to the back wall of the restaurant, where Murphy’s opened a shop to sell authentic Irish meats, jams and jellies, as well as rugby shirts, Guinness caps, and Irish music CDs.

And as you leave the shop, pause to check out a wall of old photographs from the Old Country. Murphy’s parents—captured in 1950s sepia, in the orchard outside their Blackrock home—have the place of honor.

Murphy’s roots translate well in dishes like the Full Irish Breakfast (coming in for dinner? You can order it off the bar menu.) Still–crackling sunnyside eggs, roasted tomatoes and baked beans fight for room on the plate with crisp shredded potatoes and a variety of pork: fine–ground, soft–cased sausage; sliced white and black puddings (the latter seems to be seasoned with cardamom); and rashers of Irish bacon.

Want to know the difference between Irish and regular (or American) bacon? Chef Murphy obliges with a plate of the raw stuff. Though they both come from the pig’s back, the Irish cut is less fatty. “The (Irish) rasher squeaks in the pan,” says Murphy, because it’s cooked with oil. You’ll find that its texture is meaty, like crispy ham.

Other places on the menu, you’ll see influences from a more recent past—mainly, Murphy’s stint at the head of a sprawling kitchen at the Ritz–Carlton. (Fans of Murphy’s earlier work will be happy to see the slaw–topped burger and the Murphinator po–boy, similar expressions of meals he made across Canal Street.)

The global hotel chain gave him unusual leeway in creating a locally–sourced restaurant. The relationships he forged with regional farmers live on at The Irish House, especially in salads. Consider the tangle of Covey Rise greens, topped with whiskey–glazed shrimp (grilled ginger sticks and brown sugar-roasted tomatoes, near burnt in spots, add beautiful depth).

At the Ritz, Murphy also honed French technique, which he showcases here in refined riffs on traditional Irish plates. The potato leek soup is frothy and earthy, and still delicate; and rather than toss roasted chicken and wild mushrooms in a pie or stew, Murphy pairs them with a Gouda–infused sauce and nestles them in pillowy puff pastry, with a drizzle of truffle oil.

He makes plenty of local references, too, maybe none as pointed as serving oysters on the half–shell with a pint of Guinness (he stocks a dozen Irish, English, German and Louisiana beers on tap, and dozens more by the bottle).

More often, though, you’ll be carried away to Ireland by Murphy’s warm, true cuisine (helped along by sous chef and fellow Irishman Ross Muggivan).

Where other kitchens shy away from making meringue in a humid New Orleans summer, The Irish House pulls it off as if we’d joined Murphy in Blackrock, sitting at his father’s knee.