At the Top of his Game

Entrepreneur Ray Wooldridge reinvents himself with a new resort destination 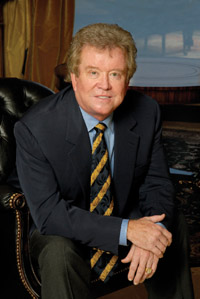 In the post-Katrina political realm, Louisiana and Mississippi are sometimes pitted against each other, but in reality the two states share quite a bit in common. The cultures, economies and interests of the Gulf Coast region are linked, and what’s good for one state is generally good for the other. People like real estate developer Ray Wooldridge understand this. He’s put his capital and influence into projects in Biloxi as he keeps an eye on helping New Orleans and the entire region recover.

If the name Ray Wooldridge seems familiar to New Orleanians, it should. Wooldridge is best known as the man who brought the Hornets basketball team to our city from Charlotte. He was also the “Ray” of Ray’s over the River, the high-profile restaurant and bar that opened at the top of the World Trade Center just months before Katrina. Wooldridge still has his permanent home in New Orleans—a lavishly ornate penthouse overlooking the Mississippi River from high above downtown. In his building, he counts several well-known newscasters, sports stars and public figures as his neighbors.

Wooldridge, however, has been spending much of his time in Biloxi these days as his company, RW Development, gears up for the 2008 opening of the first phase of its flagship beachfront property called South Beach Biloxi. “We call it South Beach because it’s similar to developments in south Florida,” he explains. “Our plan is to create a new contemporary lifestyle on the Gulf Coast.”

South Beach is positioned as a condominium development with all the high-end amenities one would find at a luxurious vacation resort. While the first tower will have 100 units, the greater master plan will consist of approximately 3000 living spaces across 80 acres to create an upscale seaside neighborhood of residences, hotel rooms, shopping, dining and more.

“I believe in Biloxi. My company has always seen its potential. We started acquiring land before Katrina with small investments,” Wooldridge says. “The post-hurricane rebuilding process then created the opportunity to increase the size and scale of our vision. Over the next five years, my firm will have created between $1.5 and $2 billion in development. Currently, we’re one of the largest landholders on or near the beach.”

Wooldridge also sees rebuilding as a silver lining that is allowing Biloxi as a whole to raise its profile. Seedy pawnshops and blah fast-food restaurants are giving way to projects that will push Biloxi toward its goal of becoming a premier destination spot. The city’s place in the national spotlight is already increasing as its airport continues to add more and more direct flights.

The gaming industry has been the principal engine fueling the growth of Biloxi, but everyone—from city officials to developers like Wooldridge to casino managers themselves—realizes that Biloxi won’t thrive on gaming alone. Diversification is key.

“Biloxi offers 24-7 entertainment, 365 days a year. It has perfect weather year-round and is great for families,” Wooldridge remarks. “But there’s a void of non-casino hotels in Biloxi. Not everyone wants to stay in a casino. Biloxi is currently 10,000 hotel rooms short.” He points out that Biloxi has a lot more to offer tourists than other gaming destinations do and that both the government and businesspeople like himself are working to develop and publicize these attractions.

“The political environment in Mississippi is so welcoming for development,” he says. “From the governor’s and mayor’s offices to the Biloxi City Council, the doors are always opened for business.”

Wooldridge naturally believes that the ease of doing business coupled with Biloxi’s growth and general appeal is making his South Beach project a great opportunity for investors. He underscores that many real estate markets are saturated, but Biloxi’s is just beginning. Also, the tax incentives put into place by the GO Zone Act will probably never be seen again. Beyond the investment aspects, he is building South Beach to be a great place to live or to spend a vacation, with vistas of the Gulf Coast and all the amenities one could want.

Although Wooldridge’s current focus is on Biloxi, his feet are firmly planted in New Orleans. Besides having his residence here and having operated New Orleans businesses for more than 20 years, his children and grandchildren live and work or go to school in the Crescent City. He’s involved in local philanthropic organizations like the Emeril Lagasse Foundation, Tulane Athletics and a number of children’s charities. Meanwhile, his links to Mississippi are also strong. His university alma mater is in Mississippi as are a lot of his other immediate family members.

“I personally have deep ties to both Louisiana and Mississippi, and I want to see them both thrive. I’m excited that the South Beach development will further strengthen the link between New Orleans and Biloxi,” Wooldridge says. “We’re seeing a lot interest in the property from quite a few locals here. The appeal is obvious. South Beach offers a luxurious weekend getaway home just an hour and a half away.”

“On a personal note, I see the South Beach project as a way to reinvent myself,” he continues. “All entrepreneurs reinvent themselves. It’s happening to me and my company along with the Gulf Coast. We’re all thrilled about it.”