Art in the park

NOMA is back and better than ever with three stellar exhibitions 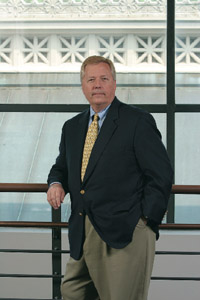 The New Orleans Museum of Art, one of the city’s major cultural institutions, sustained little damage from Hurricane Katrina, but in the storm’s aftermath, it faced budget cuts, lost revenue and fewer out-of-town visitors. Today, however, membership is almost back to pre-Katrina levels, and the museum has a successful major exhibition under its belt.

Katrina Through the Eyes of Children, extended until December 31, is a popular show featuring works by the children of Renaissance Village, Louisiana’s largest FEMA site, created in an art-therapy project spearheaded by Sister Judith Brun, executive director of Baton Rouge’s Community Initiative Foundation. A $200,000 grant from the Prefecture of Hiyago, Japan, where the Kobe earthquake occurred, has enabled the New Orleans Museum of Art (NOMA) to develop an analogous, sitespecific program in New Orleans, working with students at one school per semester for two years. It’s rare that a museum gets to be so hands-on, but, says NOMA’s assistant director for education, Joanna Sternberg, “it gives us a tangible way to contribute to the city’s recovery, and that’s so rewarding.”

Recently, New Orleans Living sat down with E. John Bullard, NOMA’s director, and talked to him about the exhibition, his career at the museum and the state of NOMA today.

What brought you to New Orleans?

I came here 35 years ago for this job as director. I remained because New Orleans is a very seductive city, and we’ve had a lot of success here over the years.

What are some highlights of your tenure?

In 1977, NOMA presented the Treasures of Tutankhamun exhibition. That led to the recognition of the museum as an important cultural tool and put us on the map as a regional center for the presentation of major international exhibits.

When I came, we made a major effort to form a comprehensive collection of photography—in the early seventies, an underappreciated and underpriced field. We now have around 7,000 images, from all the major artists, from the beginning of photography to the present.

What challenges has the museum faced since the storm?

Though we’re in Mid-City, the museum was built on a natural ridge. From satellite photographs, the museum looked like an island surrounded by water. We did not have damage to the artwork inside, and the only damaged sculpture has been repaired.

The harder part was the more human loss. In October 2005, we had to lay off 85% of our staff, from 110 employees to 15. The museum was closed and had no earned income for six months. We’ve raised most of the $15 million we believe we need to sustain ourselves for the three years after Katrina. Foundations like the Hearst, Andy Warhol and Mellon foundations bent their eligibility guidelines so they could assist us and other nonprofit organizations in the city.

We reopened the sculpture garden in December 2005 and the museum in March 2006. We didn’t want any impediment to Louisianians visiting, so we made the museum free for Louisiana residents. Out-of-state visitors are coming back but very slowly. We have about 50 employees, still reduced, but we’re carrying on all our programs. With the assistance of the French government, we presented a major exhibition this spring, Femme, Femme, Femme: Paintings of Women in French Society From Daumier to Picasso. That helped bring membership to about what it was before the storm.

Tell me about Katrina Through the Eyes of Children.

After the storm, a number of people wound up living outside Baton Rouge in Renaissance Village, the state’s largest FEMA trailer park. Sister Judith Brun, something of a legend in Baton Rouge, organized an art-therapy program for students living there. She obtained funding, including from Rosie O’Donnell’s [For All Kids] Foundation and brought in art therapists from California. It’s been quite successful; it’s given and continues to give great relief to a number of those kids.

The pieces [for the exhibition] were selected by Sister Judith and the therapists, since they knew the work so well. Sister Judith secured funding to have the works framed and hopes to take the works on tour [after its NOMA run].

What else is going on at NOMA?

We have another exhibition, Katrina: Days of Terror, Months of Anguish. New Orleans painter Rolland Golden has produced about 30 paintings which deal with the evacuation and flooding of the city and [its aftermath]. I find them very moving; I think it’s the best art that’s been produced as the result of the storm.

The other big show is Blue Winds Dancing: The Whitecloud Collection of Native American Art. Thomas Whitecloud was part Chippewa himself. His father was the first Native American to receive a medical degree from Tulane, and Tom was head of orthopedics at Tulane Hospital. Tom’s wife, Mercedes, has continued to collect Native American art since his death. It’s a magnificent show, very strong in work by Southeast Indians, particularly ones in Louisiana but also from the Northeast. It’s the most comprehensive show of Native American art we’ve ever organized.