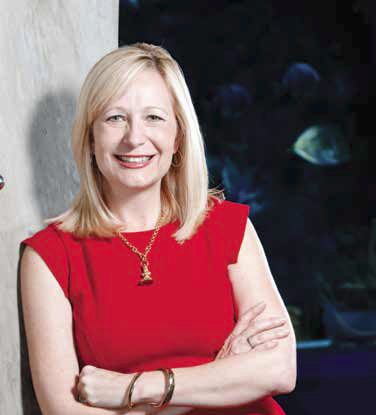 “One of greatest things about working here is that it’s fun,” said Karyn Kearney of her job at the Audubon Nature Institute. “The word ‘fun’ even appears in our mission statement. Whenever things get stressful, I can take a break and go see the parakeets.”

Part of Kearney’s title is managing director of the Aquarium of the Americans, but her role at Audubon entails far more than the aquarium. She heads the Insectarium, Woldenberg Park and the Entergy IMAX Theatre, and (among other things) she is the executive who oversees marketing and public relations for the entire Audubon organization. Although her domain can be found at the foot of Canal Street, she spends a fair amount of time uptown at the zoo where Audubon’s corporate offices are.

“Luckily, I live off Magazine Street about midway between the zoo and aquarium. I go between the two so often, I could probably drive Tchoupitoulas on autopilot,” she joked.

Kearney thrives in her position with its diverse duties, which on any given day might entail operations issues, managing employees, coordinating a festival or developing new attractions. Kearney said she “learns something new every day,” and that doesn’t necessarily mean a new management tactic. It could be about why the cow chews its cud or why a snail leaves a slimy trail.

Those factual tidbits are actually part of Animal Grossology, a new exhibit at the aquarium, which she helped develop; another new one is called Parakeet Pointe. Other Audubon improvements underway are adding a playground and an interactive fountain outside the aquarium. Inside, they’re renovating the Caribbean Reef, that beautiful glass tunnel near the entrance. At the zoo, the elephant barn will be remodeled, and the super-popular water park Cool Zoo, which just opened last year, will add a lazy river.

“We’re an entrepreneurial organization. Audubon is constantly evolving, building and rebuilding,” Kearney said. “Our staff is extremely nimble. We have a lot of talented people who can wear different hats each day.”

That agility proved essential after Katrina threw the organization into a tailspin and forced dramatic cuts in staff. In the end, Audubon proved to be an important part of the recovery. The zoo re-opened in November 2005, just three months after the storm when New Orleans was sparsely populated. According to Kearney, some 75,000 guests attended re-opening weekend, more than the number of city inhabitants at the time. People flocked in from all over.

“It was one of the most rewarding experiences of my life, and I felt the same when we re-opened the aquarium in 2006,” she said. “I stood at front gate and watched people walk in with tears in their eyes. They’d say, ‘This is the only thing in my life that’s normal right now.’ Bringing normalcy back to New Orleans was a personal and professional high point for me.”

The night of the aquarium re-opening also happened to be the night Kearney first talked to the man who would later become her husband. Early in their careers, both worked in Louisiana politics. Although they traveled in the same circles and attended the same events, they had never met before.

Kearney grew up on a farm in north Louisiana with her four younger sisters. She credits her rural upbringing for instilling the values she holds dear today: hard work, gratefulness and responsibility to community. She enrolled at LSU in Baton Rouge and chose to study journalism because of her interest in government and a desire to effect change. As a senior, she worked on Buddy Roemer’s campaign for governor, and when he won in 1988, she took a job in his administration. Eventually, Kearney needed a break from the 24/7 schedule, so she moved to New Orleans for a position with the Louisiana Music Commission. After about a year and a half, she signed on with Audubon.

It was the early 1990s, and civic pride was low. She and a friend in the Young Leadership Council, an organization for young professionals, didn’t like how so many residents seemed needlessly negative about their city. Through the YLC, they raised $1 million and launched the “Proud to Call It Home” campaign. Bumper stickers with the slogan soon appeared all over town and are still in circulation almost twenty years later.

“As a public image campaign, it was incredibly successful. And I love all the bootlegs,” she said, referring to the multi-language versions of the slogan that became equally popular. “That’s what you want from a campaign like this, for your idea to take hold.”

Kearney remains involved in a number of charities and civic organizations, often as a board member or leader. For example, she’s one of two city champions for Lemonade Day this May. It is part of a nationwide event that teaches kids basic business and entrepreneurial skills. She has two children of her own and loves how Audubon brightens kids’ lives.

“I love sharing our cultural assets and animal collections with children,” she said. “They’re having experiences that will always be a part of their lives. When I’m at work and see children laughing and happy, that’s the greatest reward.”