A triple encore of excellence 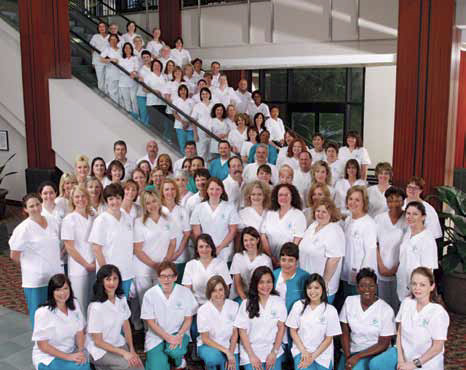 In any healthcare facility, nurses perform vital functions, and East Jefferson General Hospital (EJGH) has been boosting its nursing program by repeatedly seeking—and earning—a prestigious recognition for nursing excellence from a national nursing accreditation organization. In fact, this honor, called the Magnet Recognition, was just awarded to EJGH for the third consecutive time.

“The nurse’s role is complex,” said EJGH CEO Dr. Mark Peters. “You might think it starts with taking blood pressure, inserting an IV or hanging the antibiotics, but there’s really a whole lot more nurses do. They serve as an important liaison between physicians and patients. And they have to keep up with all the changes in healthcare, such as inputting information into electronic health records, in order to promote patient safety and quality of care. Many different things go into nurses’ care of patients.”

Healthcare facilities that have received a Magnet Recognition are a select group: fewer than 400 out of nearly 6,000 in the United States. Each recognition is valid for four years, and with EJGH’s third consecutive recognition, the hospital now finds itself in even more elite company. Only 52 healthcare organizations across the country have received the honor three times in a row.

One reason the Magnet club is so exclusive is because the process of receiving the award is difficult and time consuming. It starts with a complex application form calling for plenty of data which is thoroughly reviewed by the American Nurses Credentialing Center (ANCC), the organization granting the recognition. If deemed acceptable, the written application is followed by a group of examiners visiting the healthcare facility to conduct inspections and interview nurses, hospital leaders, patients and others. Then reviews and observations are returned to the ANCC for further assessment and, finally, a vote.

“I think any hospital can apply for consideration,” said Peters. “I don’t know percentages, but many hospitals who apply don’t receive recognition.”

EJGH doesn’t regard the accreditation process as an ordeal to get through with a nice honor (hopefully) at the end. Rather, it is an opportunity to review its nursing program against external checks and make sure the hospital is performing all of its nursing functions at a high level. The process also serves to boost morale and a sense of purpose among EJGH staff members, nurses in particular.

“When we started the journey to Magnet designation over ten years ago, I think it bonded our nursing staff around a common goal,” said Senior Vice President Janice Kishner who is the Chief Nurse Executive at the hospital. “As we have just earned our third designation, I am still amazed at how Magnet galvanizes our staff and brings a togetherness to the entire organization.”

Peters added, “For nurses, it’s a point of pride. The hospital has leadership that provides direction, but it’s really the nurses at the bedside who make a daily difference. They all work hard, and this recognition reinforces that their efforts are being appreciated.”

According to the ANCC, Magnet-recognized healthcare facilities are shown to have higher patient satisfaction with nurse communication and availability of help, a lower risk of 30-day mortality, higher job satisfaction among nurses and lower reported intentions of nurses wishing to leave their positions.

582
previous Around Town: Fitness
next “Up on the Roof”