INTERIORS | Building a Home Together

A pair of 30-somethings start from scratch Post-Katrina 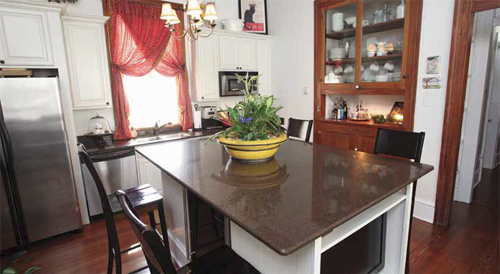 Change is a constant in life. In the world of interiors, it can be a slow evolution, a reflection of a new status or altered lifestyle or can be brought on by a dramatic calamity.

For Courtney Abercrombie Clark, change has been brought about by a series of events –starting with the purchase of a sweet 1910 cottage in Mid-City three months before Katrina and culminating with her marriage this past spring.

The four and a half feet of water the house was inundated with during Katrina necessitated gutting the newly acquired house, along with its contents, though the high water mark has been purposefully left on the cypress mantelpiece in the kitchen. Clark maintains an upbeat view: “It was sad to lose almost everything, but it also gave me the opportunity to completely decorate the house the way I wanted. I didn’t feel forced to hang on to things that didn’t work with my design esthetic. At 29 years old, I had a lot of cast-offs: college memorabilia and a seriously eclectic approach–leftovers from my Ole Miss and first apartment days.” Free of possessions, she allowed herself to be inspired by magazines, books and stores that moved her forward from post-college to sophisticated young professional.

Direction & Focus
She cleared the design deck and seized the moment. She had a clear vision of what she wanted and she stayed away from impulse purchase. A tough editor, her credo could be “use it, lose it or pass it on.”

“I worked in the hotel business, for hotels as large as Hilton and small as Maison de Ville & Audubon Cottages,” said Clark, “so I have seen any number of design approaches. My dining room is the color of the restaurant, Le Bistro, at the Maison de Ville. I found a can of paint and had it copied. It’s the only color in the house other than Alabaster, Beige Sand and Sand Storm, all by Sherman-Williams. Those colors came from a house our family rented for several months after Katrina. It was interesting to see how the colors played out in various lights and times of day. They were very peaceful. I liked that and used them when I was able to move back in and repaint.”

Less is More
There is a young, urbane vibe about the way Clark goes about decorating. One enters the house and is immediately struck by the length of the 35-foot long side hall. “It was once an outdoor gallery now enclosed, and, though many people don’t get it, I like the charm of the windows still being intact from the original house,” she explained. Furnishings are minimal: a pale, painted sideboard graces the right-hand side; on the left is a 15-foot church pew, purchased from a Catholic church in Hammond. The space below the pew has been converted into storage for the red wines the couple collects. Above are a series of crosses, a collection gathered on travels, received as gifts and even one or two painted by Clark.

“I collect crosses; white porcelain and crystal. I group the collections together for visual impact,” she explained. “When you do this, it draws attention but doesn’t look cluttered. I hate clutter. I’m not a fussy person. I like order: like things with like things.” This is exemplified by her home office-cum-guest bedroom, where baskets hold books, cocktail glasses and even paperwork.

High Style, Low Maintenance
Throughout the house, from the living room to the kitchen–where an original cypress butler’s pantry was the selling point–to the master bedroom, Clark has layered variations of the three paint colors. White, dark and tan on tan dominate sofas, ottomans and chairs. Pops of color come from artwork donning the walls. “Most of these were purchased at places like Pottery Barn, Pier One, the Renaissance Shop and from stores on the North Shore,” said Clark. “Our bed is from the original Bombay Company when it was here. It’s a mahogany four poster with canvas tied island style across the top of the bed. At this point, until we have a baby, I see no reason for another piece of furniture.”

The same can’t be said for animals who, at present, rule the Clark roost. There’s the large gray cat named Tennessee, rescued from the Maison de Ville, and a yellow Labrador named Boo Radley.

“With these two, the cardinal rule is that everything has to have slip covers that can be washed. I am all for low maintenance.” High-style, low maintenance: for a pair of thirty-somethings starting a life together, it seems an ideal way to live.

302
previous The Party Planners
next Keepin’ It Green