“About six months ago, a goddess said to me: ‘paint the dress.’ So I had to listen. I’m just the messenger.” 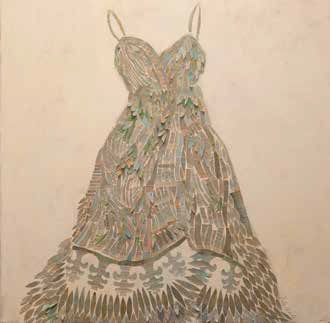 Artist and designer Julie Neill has been creating hand-crafted chandeliers here in New Orleans since 2000, but it was only a few months ago that she began displaying her paper mosaics, which are created by cutting and painting paper to canvas, forming images of Greco-Roman style dresses. The result is effervescent and breathtaking.

“I heard this voice one night telling me to create these dresses, so I did. I begin by painting a base coat on canvas with my hands. Then I just start cutting pages that I’ve already painted. A lot of them want to be white, I don’t know why. I kind of know what colors I’m going to want on any particular dress. So I’ll paint the paper certain colors, and I’ll have a stack of this color and a stack of that color; then I just start cutting and putting it all together,” Neill said. “The mosaics are layer upon layer of meaning and thought; it’s fascinating because I don’t look at what I’m cutting. I just cut. After I cut, I like to go back and see what they say.”

Neill uses old sheet music, pages from harlequin romance novels and sometimes even love letters for material to create her dresses. Each piece is unique with the bits and pieces it was created with.

“This piece here, called “Dear Vivian,” was created from old love letters written to a woman named Vivian. I found the letters on eBay and I knew I had to make a painting out of them,” Neill said. “It didn’t have as much white in the dress as I wanted, so I used these modern-day roof plans from a house I’m doing the lighting for, and I laced the bottom of the dress with the front of the envelopes addressed to Vivian.”

Neill was born in Germany but her family—New Orleans natives—moved back to the Crescent City when she was a baby.

“I used to drive around with my grandparents and listen to them say, ‘Oh, I remember when that got built,’ and I feel very historically connected to New Orleans and to history. I’ve always felt spirits connected to me. That’s where these voices come from telling me to paint the dresses. They’re voices from history and they’re my friends.”

As you walk across the room taking in each piece, the dresses seem to be flowing in the wind, made with old sheet music cut in the shapes of leaves, or flowing white robes fit for a queen.

“Someone told me ‘the mosaics look like you can see that a person has just sort of taken off the dress.’ These are paper mosaics, but the paper just jumps off the canvas at you. Sometimes the paper just does what it wants, for instance, on this dress the paper is curling up like frills. I couldn’t make it stick to the canvas, but then I realized that it was meant to be that way.”

The mosaics have a kind of motion to them. You can almost see the figure of a woman dancing in a dress. When observing these mosaics for the first time, it’s not hard to believe that Neill receives divine intervention from history.

“I feel led when I’m creating these pieces, like I’m not driving it, I’m following it. So, painting these mosaics are so freeing for me. I really just get to do what I want with them,” Neill said. “I become so emotionally involved in these pieces that I have to calm down and try to let the dresses tell me what to do, or where to go next with it.”

Neill will soon begin experimenting with wooden panels as the base for her mosaics, which will set a different tone from her mosaics done on canvas. Whatever she comes up with next, it’s sure to have the same incredible allure and individuality of her beautiful paper mosaics. Neill’s very presence is rife with spirit and personality, and her work undeniably reflects those same attributes.