A Star Is Reborn 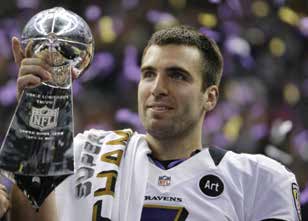 It was said first by a famous bard: the stars do not hold our destiny but we ourselves do. In August 2005, the stars surely seemed aligned against New Orleans. By February 2013, New Orleans had itself become a star. For a full week, national and international media and high-profile visitors descended upon the Big Easy and the town found itself in crunch time.

Likewise, the city descended upon the media and players. The Big Easy delivered like Drew Brees in the red zone within the two-minute warning. Reaction among the national press was overwhelmingly positive, and it was common to overhear that New Orleans was considered, perhaps along with Miami, the best possible Super Bowl site. The owner of the Baltimore Ravens, Steve Bisciotti, on the podium after receiving the Lombardi Trophy and before the largest of national television audiences, stated, “I want to thank the city of New Orleans for what is just a spectacular way to celebrate. I have never seen anything like it.”

The NFL Network had over 140 hours of programming in the city and CBS News, Sports, Entertainment and Radio all set up studios for the week’s duration in the convention center and in Jackson Square to great effect. ESPN made the scenery of the Vieux Carré and the river its backdrop for a live audience of thousands over the course of a full week of live telecasts. The city itself played a role in the game as almost every interview featured questions about how the players would handle the local “distractions,” especially as the teams’ hotels were located in the French Quarter, not necessarily the tamest section of the city. Future MVP Joe Flacco dealt with it well enough:

“This is the first time I’ve been here. It seems like a very fun time. I was walking around the city for a little bit last night just to kind of get a feel for it. Most places, I would assume you go out on a Monday night and walk around and it’s pretty quiet, pretty dead. Parts of the city were like that but in other parts of the city, it didn’t seem too much like a Monday night. It’s crazy to think about what this place might be like on the weekend.”

While most players similarly spoke admiringly of the food and the sites, their approach mostly concerned their focus on preparation, as Ravens cornerback Cary Williams stated: “I’m not here for a city tour. I’m here to win a football game.” And so the Ravens did.

And then there was NFL Commissioner Roger Goodell. The question early on was whether he would feel as though he was behind enemy lines, but it turned out that his impression was just as grand:

“I couldn’t feel more welcome here. I’m serious, really, the people here have been incredible … They couldn’t be more welcoming, and the same is true with fans.  Now, I understand the fans’ loyalty is to the team … I appreciate the passion.”

After the game, Goodell was even more effusive, stating:

“We had a fantastic Super Bowl, a thrill for the game. It looks like our fans were also thrilled. Early indications show that, for the third consecutive year, it will have been the most-watched television show in history … To New Orleans, an absolutely spectacular job hosting the Super Bowl … It was an awesome week. The city did a great job. It was great to be here.”

The game itself was perhaps the most competitive and exhilarating in NFL Championship history and the feeling inside the Dome was that of a college championship bowl game, with two old-line traditional pro football cities bringing huge noise, well rehearsed cheers and energy when both sides had the ball. But Super Bowl XLVII was not just a competition on the field; it was a competition between cities, Super Bowl sites past and future. The value to New Orleans was incalculable. Hundreds of thousands of visitors and scores of NFL events (such as the Taste of the NFL food extravaganza) plugged hundreds of millions of dollars into the economy and a future bid for the 2018 Super Bowl hangs in the air. All of this can be estimated to the penny, but the value of pride, of satisfaction and of finally being able to say and show that the city has “recovered” and mean it—that feeling cannot be valued any more than it can in a person.

In 2009, the Saints finally came marching in and joined that elite list of franchises that had won a championship, leaving behind a legacy of disappointment. In 2013, the city itself came marching back into the nation’s consciousness with a display that showed it deserves to be ranked among America’s most prominent cities. New Orleanians should never forget how brightly they and their town shone that night.

87
previous Championship City
next Learning to Fly: The Hornets’ Search for Identity