Chelsea Ann Umbach grew up in the water. She didn’t have a choice—as the granddaughter of Harry Caldwell, founder of Harry’s Dive Shop on Metairie Road and one of New Orleans’ earliest scuba enthusiasts, diving was in her blood. 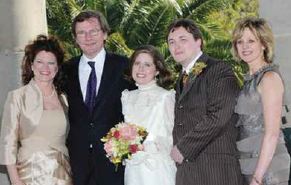 Despite being born with a heart defect, Chelsea became a diver at age four, triumphantly showing off her ability to clear her diving mask and swim underwater in a single breath.

Chelsea’s mother, Cindy, took over the dive shop in 1986 after Harry Caldwell passed away unexpectedly. Remembering those difficult days, Cindy said she couldn’t have kept the shop going without “good employees, good friends and good family.” She had Chelsea’s health to worry about, too: the eleven-month-old was admitted for heart surgery a week before her first birthday, enduring complications before being sent home to recover.

Growing up in and around the dive shop, Chelsea swam, scuba’d and helped out with lessons and trips until she was fifteen. That summer, she got sick twice in three months. She was too weak to leave her bed, suffering from nausea and chest pains, unable to catch her breath. Several doctors found nothing wrong with her, but after she and Cindy had to abort a difficult dive because Chelsea was dizzy and in pain, they sought a different opinion.

Chelsea was diagnosed with primary pulmonary arterial hypertension, a rare disorder characterized by abnormally high blood pressure in vessels of the heart and lungs. The disease affects almost three times as many women as men, causing fatigue, decreased exercise tolerance, chest pain, enlarged ventricles and eventual heart failure. There was “very, very little” medical literature on pulmonary hypertension, said Cindy, until the weight loss supplement Fen-Phen was found to trigger it in predisposed takers of the supplement.

There is no cure for pulmonary hypertension. Chelsea was told that she would live two to five more years.

Shocked and heartbroken, Cindy began to research Chelsea’s disease. She found that by a stroke of fortune, a trial for a new drug to treat pulmonary hypertension was being conducted at the Louisiana State Medical Center, one of only eleven trials in the United States. The physician conducting the study, Dr. Bennett Deboisblanc, had worked at Harry’s Dive Shop in the ‘70s and had been friends with Cindy’s older brother. Cindy called him. The timing was right: Chelsea was accepted into the double-blind study. She immediately began taking a mystery medication, either a placebo or the real drug, known as Tracleer® or Bosentan.

When Chelsea began to sweat and shake, Cindy knew that her daughter was being given the real drug. Tracleer’s primary function is to block a substance named endothelin from binding to receptors and causing blood vessels to constrict. With Tracleer in the way, vessels remain unconstricted, keeping blood pressure as low as possible and reducing strain on the heart.

At the conclusion of the drug study, it was revealed to Chelsea, Cindy and Dr. Ben that she had indeed been taking Tracleer. Despite recurrent chest pains, Chelsea’s health had improved, and she wanted to continue taking the drug. Unfortunately, the Food and Drug Administration had not yet approved Tracleer for use in the United States. Dr. Ben’s hands were tied; he couldn’t keep giving Chelsea the drug that was saving her life one day at a time. Without it, her health declined again, and her chest pains intensified.

Chelsea’s family members pleaded with the hospital on her behalf, but were unable to get Chelsea the drug. Cindy turned to other channels, eventually procuring Tracleer through its Swiss biopharmaceutical manufacturer, Actelion.

She was put on the transplant list at the University of Alabama at Birmingham, and enrolled in graduate school to keep her health insurance. Finally, after seven calls alerting Chelsea to the possibility of a double lung and heart transplant, she received new organs on January 4, 2010.

Cindy recalled her daughter’s convalescence, musing, “Transplant is an interesting thing. You often to some degree assume the likes and dislikes of the donor.” Chelsea, who had never liked meat before her surgery, gained a taste for it. She passed her days in bed completing her master’s degree in English literature via video conference, cross-stitching and talking to a group of online friends who shared this hobby.

Chelsea and Robert were married at the Peristyle in City Park on a sunny March day just three months after her transplant. In May of 2010, the couple joined family members for a boat ride and snorkeling trip in Vortex Springs, Florida. Chelsea was ecstatic to be back in the water.

Cindy described these post-transplant months as “a learning experience,” as her daughter got used to having a new heart that changed her tastes and even her feelings. Throughout her recovery, Chelsea continued to raise awareness of pulmonary hypertension, sharing what she had learned through trial, research and experimentation—for example, that intake of salt and vitamin K should be severely limited, and patients should avoid processed, frozen and canned foods. She wanted people to know what was involved in managing the disease, and promoted a diet of fresh foods and greens. “It goes back to the way we should all eat,” said Cindy.

Along with her outreach efforts, Chelsea returned to Harry’s Dive Shop to pursue her lifelong passion for diving. “Always smiling, always helpful” and fond of kids, Chelsea started Swim Smart at Harry’s, a swimming school for special needs children. “She did not tolerate people’s ignorance, people choosing to turn a blind eye,” remembered Cindy.

Her transplant gave Chelsea sixteen months of full, rich life with Robert and her family. Sadly, no transplant is without complications. On July 17, 2011, Chelsea contracted pneumonia and died in the course of a single day.

On April 7, 2013, Harry’s Dive Shop will host a benefit for the Chelsea’s Radiant Smile Foundation and the LSU Health Sciences Foundation. The goal of the event, explained Cindy, is to raise awareness of pulmonary hypertension and to educate patients on the importance of taking care of themselves. Even now, she said, the disease “doesn’t even have a chair at the table of medical recognition.”

The benefit will take place at the Peristyle, with a run/walk around City Park and a silent auction of restaurant gift certificates, diving equipment and some of Chelsea’s jewelry and personal items. Home-cooked food and baked goods will be offered, and attendees can meet Dr. Ben, Chelsea’s physician and longtime family friend.

To donate to the Chelsea’s Radiant Smile Foundation, help spread awareness of pulmonary hypertension and support education about this fatal disease, visit www.lsuhscfoundation.org

1.95K
previous Michael Weaver, MD
next Skip the Gym! Three Ways to Get Fit in the Fresh Air